Celebrate 1st day of classes b.. 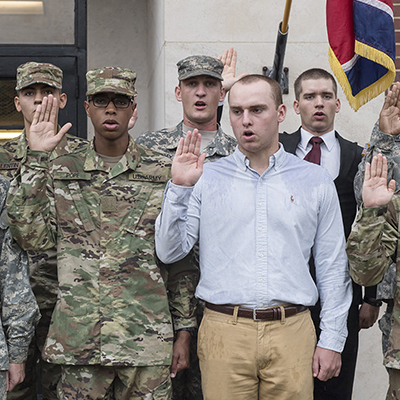 Part of the group of 18 newly contracted cadets take the oath during the fall 2016 ROTC swearing-in ceremony Aug. 19 at MTSU. (MTSU photos by Andy Heidt)

“New cadets take the oath to support and defend the Constitution of the United States, which, at their age, is very impressive,” said U.S. Army Lt. Col. Jackie McDowell, who leads the program and administered the oath to the 18- to 21-year-olds.

“It’s significant that our nation has been at war since they were 5 years old. They took an oath knowing at some point they will be deployed and be in harm’s way.”