‘Still a lot of work to do’ to solve issues raised...

‘Still a lot of work to do’ to solve issues raised in Ferguson: panelists 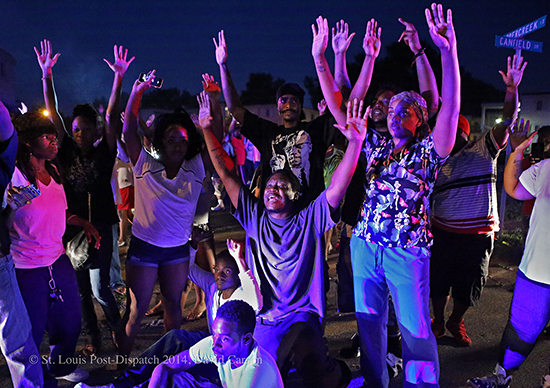 A trio on the front line of America’s most vocal civil- and human-rights unrest in decades agreed Tuesday night at MTSU: Ferguson, Missouri, has forced the nation to face and talk about its freedoms.

Two journalists and a St. Louis city alderman discussed their experiences with a standing-room-only crowd inside the university’s Tucker Theatre at “From the Front Lines of Ferguson: Covering the New Civil Rights Movement,” a special Feb. 10 panel discussion presented by the John Seigenthaler Chair of Excellence in First Amendment Studies at MTSU. 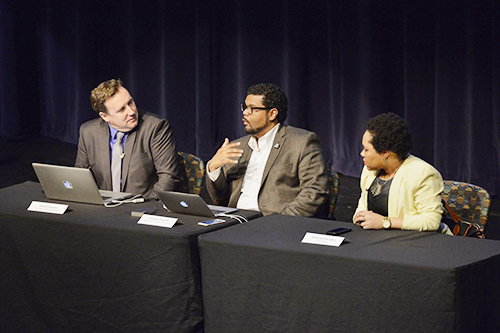 “It was a complete failure of government, a complete breakdown of government,” St. Louis 21st Ward Alderman Antonio French told the audience, speaking specifically of the November night after a grand jury decided not to indict Officer Darren Wilson for the fatal Aug. 9 shooting of unarmed teenager Michael Brown.

Authorities pulled police and fire protection out of parts of the community. Protestors set several buildings afire and destroyed them, including one on West Florissant Street housing the offices of Heal-STL, an organization French set up to house community outreach programs.

“It didn’t have to happen that way,” French said. “For us in St. Louis and in Missouri, this is actually delayed history. The conversations now in St. Louis were put off for a long time, and we still have a long way to go.

“Things have gotten better (since Ferguson), but … in some ways, some things have gotten worse — the divisions, the entrenchment of opinions. It’s pretty divided in St. Louis County right now. We still have a lot of work to do, and it’s going to start with conversations, but it has to result in actions. That’s what people really want to see: actions, and progress.”

Students in the audience, including many from the College of Mass Communication’s School of Journalism, questioned the militarization of local police after viewing St. Louis Post-Dispatch photojournalist David Carson’s photos and videos from the Ferguson streets and inside police armored vehicles.

Others expressed their fears that the crises witnessed by the world — first after Brown was shot and when the local grand jury chose not to indict the officer — would soon be passed over for the next big story. Several in the audience were in tears as they watched videos from days and nights in Ferguson projected on a large screen behind the guests.

“Ferguson didn’t really have those weapons, those vehicles; they came from St. Louis (County),” Carson clarified, pointing to one of his most widely circulated photos: a helmeted officer using a tear-gas launcher on a Ferguson street.

“But they had snipers on top of those vehicles, pointing at peaceful protestors, at children,” French noted. “That only escalated the problem.”

USA Today reporter Yamiche Alcindor, who also covered the Sandy Hook Elementary shooting in Connecticut and the George Zimmerman murder trial in Sanford, Florida, said she hoped the risks she and others faced in covering Ferguson would ultimately be seen as useful.

She and Carson spoke of dodging bullets and tear gas with the crowds on the city’s streets. Protestors in Ferguson assaulted Carson, who had been embedded with U.S. troops in Iraq and Afghanistan, and French was arrested for unlawful assembly while trying to help keep the peace in the neighborhood around the fatal shooting site.

“I don’t see Ferguson as this new civil rights movement,” said Alcindor, whose source network from the Zimmerman case helped her get exclusive interviews with Brown’s mother, Lesley McSpadden. “I think Ferguson may be starting a new medium. I think the conversation they’re having there (about civil and human rights) are conversations they’ve been having for generations.”

“I covered the Trayvon Martin case,” Alcindor replied, “and for two years I talked with people of all different colors that came to Sanford and we heard all these different stories (about race and civil rights) there. Maybe this influences some families.

“I’m not saying that Ferguson isn’t a huge thing for some people, a catalyst for speaking about it in your home, but I think people of all races started talking about it when Trayvon Martin was killed, and that includes white families.”

Pat Embry, director of the Seigenthaler Chair, reminded the audience that the late newspaperman fought for civil rights during his work as a Justice Department aide in the Kennedy administration. Seigenthaler was assaulted and nearly killed by white rioters while he tried to protect Freedom Riders arriving in Montgomery, Alabama, in 1961.

MTSU established the John Seigenthaler Chair of Excellence in First Amendment Studies in 1986 to honor the iconic journalist’s lifelong commitment to free expression, including freedom of the press, of speech, and to peaceably assemble.

“We asked John what he wanted the chair’s activities to be in the next few years, and he said, ‘I hope you’ll focus on civil rights and women’s rights,’” Embry recalled. “That’s why we’re all here tonight.”

The Seigenthaler Chair supports a variety of activities related to topics of concern for contemporary journalism, including distinguished visiting professors and visiting lecturers at MTSU, research, seminars, and hands-on training for student journalists.