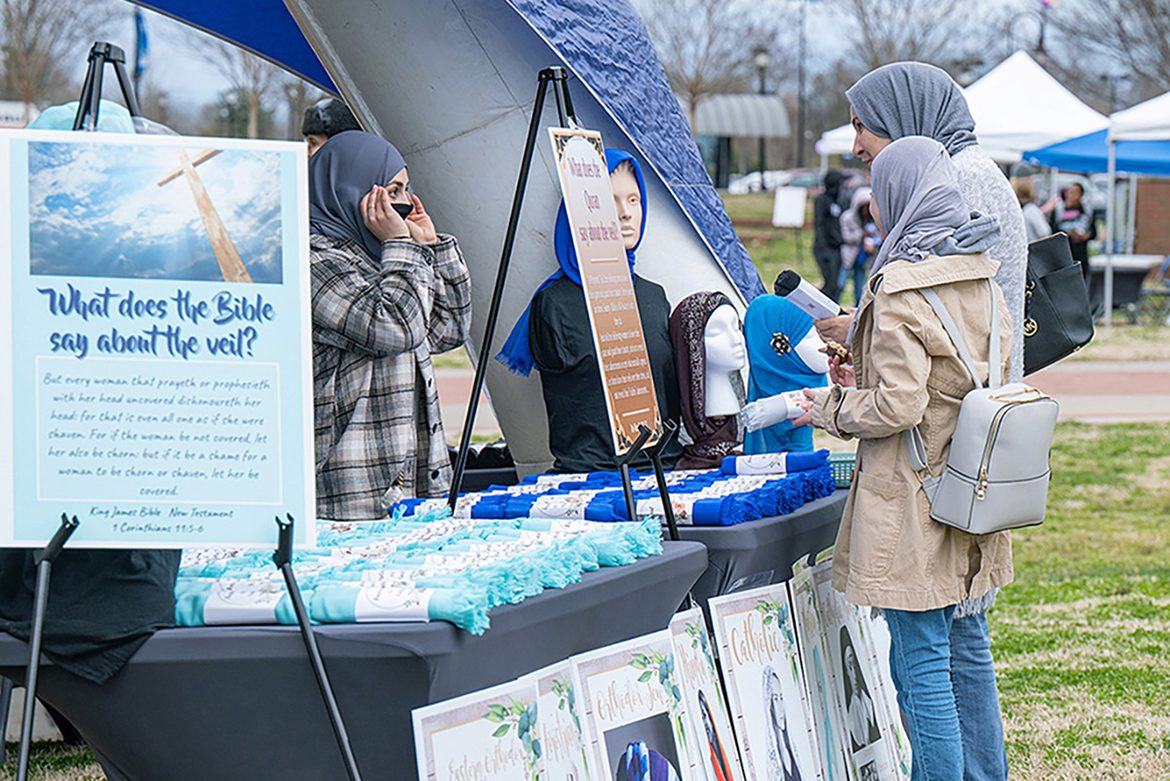 It was a windy, blustery day, a good day to wear a head covering.

At the Festival of Veils on the Student Union Commons, more than one woman covering her head and for more than one reason. The March 19 family-friendly event featured booths sponsored by organizations of various faiths hoping to spread enlightenment about the universality of veil-wearing by Muslim, Catholic and Jewish women.

A booth where free blue, black, light green and lilac veils were being given away also offered free demonstrations of how to wear hijab, the traditional covering for the hair and neck that is worn by Muslim women. 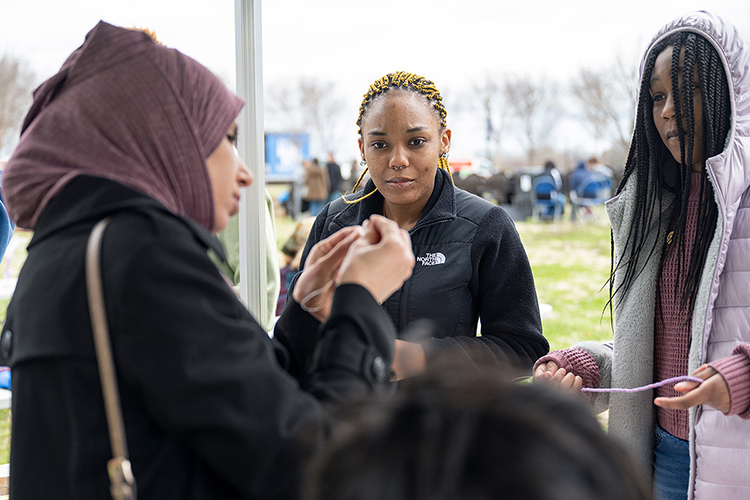 Salwi Alrubaye, left, a volunteer at the Festival of Veils, demonstrates stringing prayer beads for Lauren and Paige Surles. The festival was held March 19 on the Student Union Commons. (MTSU photo by Cat Curtis Murphy)

“I wouldn’t wear one outside of this event because I am not Muslim, but for the purposes of this event, I like to showcase it for everyone else,” Roesch said. “I want to spread diversity.”

In addition to Islam, a variety of religions and cultures have embraced the wearing of veils or head coverings for women, such as the various coverings called sheitels for Orthodox Jews, the turban for Sikhs and the caps and bonnets for Mennonites and Amish.

Zalykha Rasuli, a freshman political science major from Nashville, Tennessee, staffed a booth to explain why Muslim women wear hijab. Rasuli said the religious, cultural and modesty reasons apply, but she also finds it to be an act of independence.

“In a sense, for me, it kind of allows me to control my own narrative — not focusing on the outside beauty or outwards appearance in general, but people getting to know me for who I am,” Rasuli said. 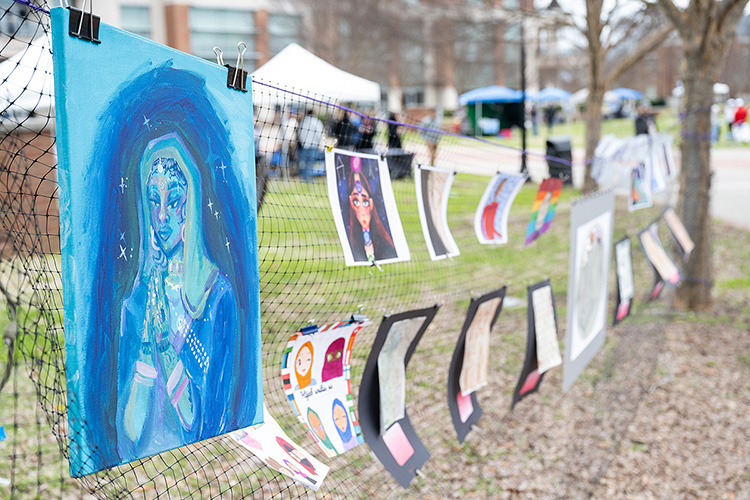 Entries in an art contest line a mesh partition on the Student Union Commons at the Festival of Veils, a March 19 event celebrating the ways women of various religions use veils. (MTSU photo by Cat Curtis Murphy)

While attendees munched on free popcorn and other goodies and their youngsters bounced on inflatables, learned speakers added their perspectives from an amplified stage. Imam Hassan Qazwini of the Islamic Institute of America in Dearborn Heights, Michigan, asserted that hijab is not a symbol of oppression.

Qazwini continued by saying that Muslim women who choose to wear hijab are trying to tell people that they will not allow their sexuality to be exploited.

“A Muslim woman wearing hijab is sending a statement that my brain is for all, my scientific, my social contributions are for all, but my physical beauty is not for everybody,” Qazwini said. “It is only for my husband. I am not an object to be used. I am not a tool to be used by men to fulfill their lust.”

Organizations like Murfreesboro Muslim Youth and the American Muslim Advisory Council provided literature about their humanitarian and advocacy work. Asmaa Mohamed, who is scheduled to transfer to MTSU in the fall with an undecided major, is an MMY board member.

“We do community service,” Mohamed said. “We do crisis assistance. We do youth events. It’s all based on donations and volunteers. No one gets paid.” 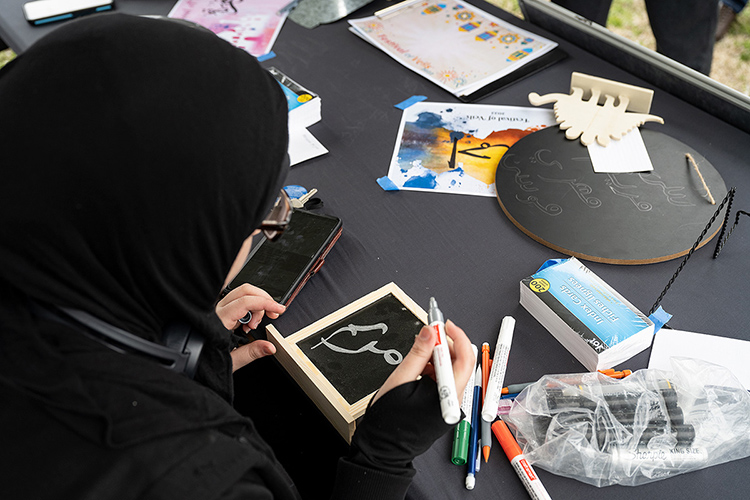 Fatimah Alnassari, an MTSU student, writes the name of a visitor to the Festival of Veils in the Arabic language. The booth was one of several on the Student Union Commons during the March 19 event. (MTSU photo by Cat Curtis Murphy)

AMAC program assistant Rayan Osman said her group educates other organizations, connects people to resources and advocates for fair treatment for Muslims and all Tennesseans.

“There are definitely a lot of people that understand that we’re all connected, we all live here and we all have a mutual shared interest in working together,” Osman said.

Khadijah Alnassari, co-organizer of the event and double major in biology and sociology, said she was pleased with the turnout, especially in windy weather.

“We’ve got a lot of people who were just very curious about the various reasons that we wear the hijab,” Alnassari, whose triplets all attend MTSU, said. “They want to just learn, have a little cultural experience and learn about the lives of others.”

MTSU sponsors of the Festival of Veils included the June Anderson Center for Women and Nontraditional Students, Intercultural and Diversity Affairs, the Religious Studies Program, Al-Wahda student organization, the Muslim Students Association and the President’s Commission on the Status of Women. 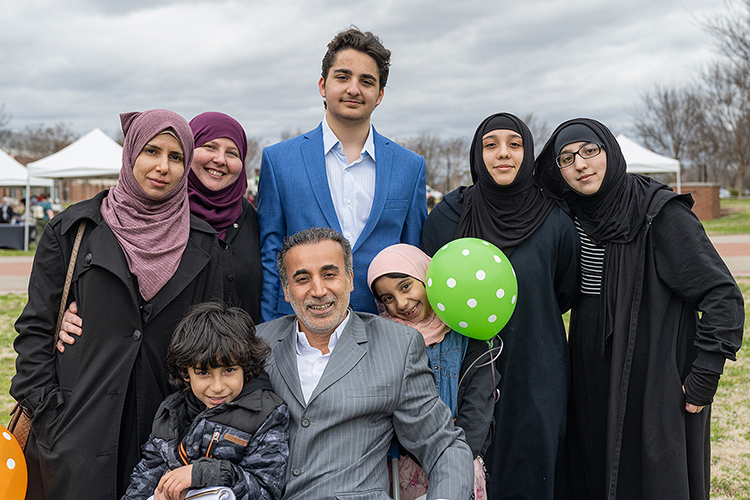 The Alnassari family was instrumental in organizing the Festival of Veils, a March 19 event that revealed the history of veils in various religions, on the Student Union Commons. Pictured, from left, in rear, are Salwi Al-Rubaye; MTSU student and chief organizer Khadijah Alnassari; and Khadijah’s triplets Ahmad, Zaynab, and Fatimah Alnassari, all of whom volunteered at the event. Al-Rubaye is the triplets’ stepmother. In front, from left, are 5-year-old Muhammad Ali Alnassari; Akeel Alnassari, the triplets’ father; and 8-year-old Zahrah Alnassari. (MTSU photo by Cat Curtis Murphy) 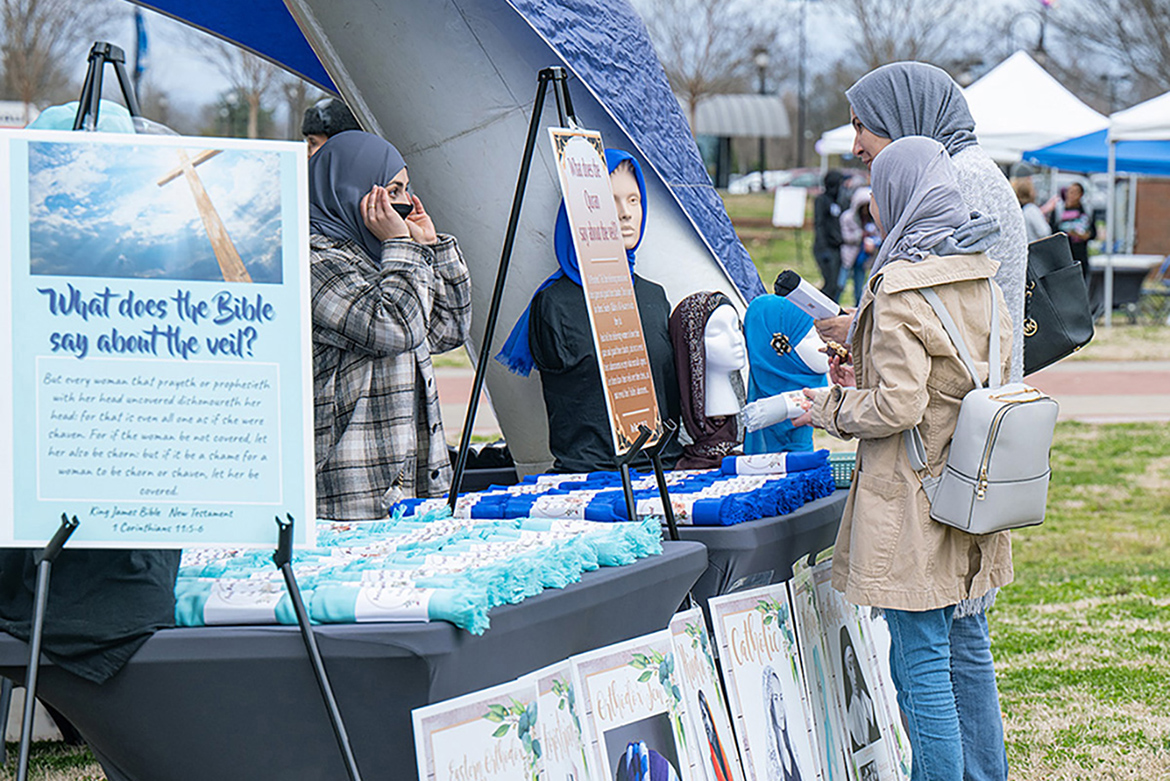 A volunteer explains the hijab, a head covering for Muslim women, to visitors to the Festival of Veils. Posters of various uses of veils in other religions, including Hinduism and Catholicism, are on the grass below tables of free veils. The event was held March 19 on the Student Union Commons. (MTSU photo by Cat Curtis Murphy)