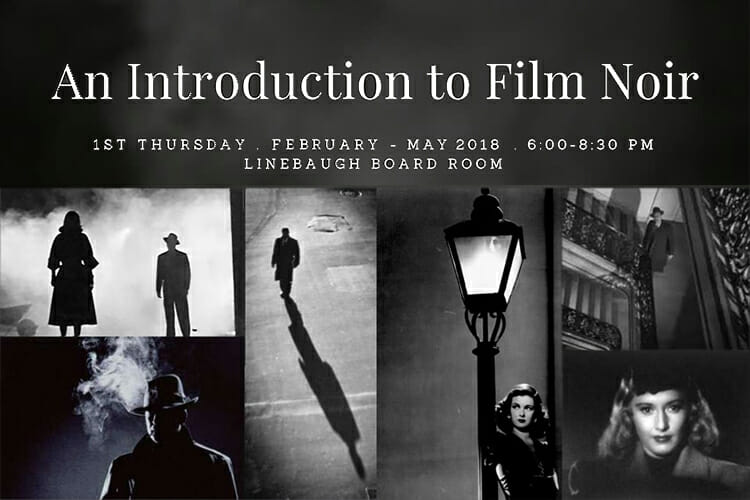 The MTSU community can dig into a free lecture series this spring that exposes cinema’s most shadowy genre to the light of day.

Dr. Elyce Helford, a professor of English at MTSU, will deepen participants’ understanding of the film noir genre of the 1940s and 1950s with “An Introduction to Film Noir,” lectures scheduled for the first Thursday of each month beginning Feb. 1 and continuing through May.

The starting time for each lecture is 6:30 p.m.

Film noir is a genre of moviemaking characterized by pessimism, violence, seductive women and perilous action that often but doesn’t necessarily include private detectives.

In each session, Helford will address a central element of film noir in a brief talk, followed by a screening of a classic noir film in the second-floor board room of Linebaugh Public Library, located at 105 W. Vine St. in Murfreesboro.

“The men and women of this sinister cinematic world are driven by greed, lust, jealousy and revenge, which leads inexorably to existential torment, soul-crushing despair and a few last gasping breaths in a rain-soaked gutter,” Eddie Muller, host of “Noir Alley” on Turner Classic Movies, wrote in an essay for TCM.com, “Low Company, High Style: The Eternal Allure of Film Noir.”

The discussion topics and films for each date are:

Helford is completing a book on gender in the films of Hollywood director George Cukor. Among the courses she teaches at MTSU are “Gender and Film,” “Film Noir,” “Survey of Popular Culture,” “Literature and the Holocaust” and “Introduction to Women’s Studies.”

The lecture series was originally set to begin in January but was rescheduled.

The film noir lecture series is co-sponsored by the MTSU Department of English and Linebaugh Public Library. For more information, contact Helford at 615-898-5961 or elyce.helford@mtsu.edu.