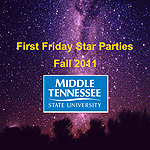 The star party will begin at 6:30 p.m. in Wiser-Patten Science Hall Room 102. After the lecture, weather permitting, there will be an outdoor telescope-observation opportunity for participants.

The Juno spacecraft is a NASA New Frontiers mission to Jupiter. Launched Aug. 5 from the Cape Canaveral Air Force Station in Brevard County, Fla., Juno is expected to arrive at our solar system’s largest planet around July 4, 2016.

It will travel about 1,740 million miles. Instruments aboard Juno will take thermal radiation measurements from within Jupiter’s atmosphere and collect other data. The mission, expected to end in October 2017, will include the spacecraft completing 33 orbits before being de-orbited and crashing into the planet.

Higgins is an associate professor in the Department of Physics and Astronomy and has been at MTSU since 2001.

Along with MTSU Space Grant coordinator Mark Abolins, Higgins’ most recent research grant study has been “Analysis of Jupiter’s Radio Emission” using the Voyager, Galileo and Cassini spacecrafts as part of the Tennessee Space Grant Consortium since 2006.

First Friday Star Parties are open to the general public as well as MTSU students, faculty and staff, and children are welcome. Free parking is available beginning at 4:30 p.m. behind Wiser-Patten only on Star Party Fridays.

The spring 2012 schedule for First Friday Star Parties will be announced early next year.