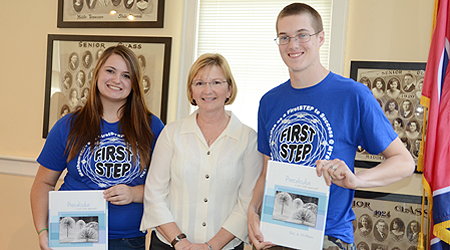 “That’s absolutely amazing,” Dr. Tom Cheatham, former College of Basic and Applied Sciences dean, said during a recent luncheon recognizing Slayton and 37 other STEM majors from all across Tennessee for completing the 10-day journey to bolster their mathematics knowledge.

Slayton, a pre-med major from Camden, Tenn., and a 2012 Camden High School graduate, admitted that completing so many problems — an average of 34.5 a day — wasn’t easy.

“It was pretty tough and a lot of hard work,” Slayton said. “They were prerequisites we need for precalculus. It was time-consuming, but I had a good calculus teacher my senior year.”

FirstSTEP is a five-year, $2 million grant funded by the National Science Foundation. The enrichment program provides financial and academic support for students majoring in biology, chemistry, computer science, engineering technology, geosciences, mathematics and physics and astronomy. It also helps students improve their college-life skills and learn about research and careers in science, technology, engineering and math — the STEM fields.

“FirstSTEP addresses their gaps in math,” said Cheatham, who led the grant-proposal development and will remain lead administrator in his new role as director of the Tennessee Mathematics, Science and Technology Education Center.

Incoming freshmen STEM majors are invited to join FirstSTEP if they have an ACT math subscore of 19 to 23, Cheatham said.

“These students are not required to take prescribed math courses, but they have some gaps in their mathematics development that need to be addressed to succeed as a STEM major,” he said.

Added co-lead administrator Dr. Ginger Holmes Rowell: “We developed an individualized study plan based on their areas of where they are deficient.”

During FirstSTEP Summer Bridge, students hear lectures from co-lead administrator Dr. Chris Stephens and others, and participate in hands-on activities led by assistant professor of university studies Dr. Joan Raines. They also do homework problems and other activities; some stay in campus residence halls.

“It’s a wonderful program,” said Cobble, a physics major and a 2011 Smyrna High School graduate. “It helped with my math scores and refreshing my high-school knowledge and retention.”

“It gives us a feel for knowledge,” Slayton added. “You get to meet a lot of new people before you start college, and the student workers and teachers are all smart.”

Cobble chose to join the Marine Corps reserves in his first year after graduation. Slayton said she wants to be a physician.

Attending FirstSTEP with her friend Sarah Ragsdale of Camden and 36 other students allowed Slayton to “get a feel for campus and a feel for freedom. It teaches you to get to know people more and connect with people. I knew one person (Ragsdale), and now I’ve met a lot more people.”

Results of the work with this group are not yet complete, but Cheatham and Rowell said they anticipate success.

“The data gathered has been encouraging so far, in that we’re making a difference,” Cheatham said.

“They all improved on their post-test,” Rowell added. “They came a very long way in two weeks. They now have a new study plan that tells them what to do for the next two weeks before school starts.”