Five Minutes with the President: Setting the Pace

Five Minutes with the President: Setting the Pace

In your recently released Biennial Report (available online at www.mtsu.edu), in “The President’s Post” section, you reported that based on information supplied by the Tennessee Higher Education Commission, MTSU was the top and most efficient producer of graduates among Tennessee Board of Regents (TBR) universities in 2011–12. Can you elaborate on those findings?

The 3,911 bachelor’s degrees awarded by MTSU in 2011–12 were the most granted by any TBR institution.

MTSU also graduated more for less state money per graduate than any TBR university. In dividing MTSU’s 2011–12 total state funding by the number of graduates that year, the state spent $18,773 per MTSU graduate.

MTSU had the second-highest graduation rate among TBR universities based on a six-year cohort with 51.6 percent in 2011–12.

MTSU led all state universities in the production of adult graduates—defined as age 25 and older—with 1,488 degrees granted in 2011–12.

The Complete College Tennessee Act calls for colleges and universities to focus on student retention, degree completion, improvement in the areas of transfer and articulation, and institutional mission distinctiveness. These goals have long been strategic priorities for MTSU, helping us become the number-one producer of graduates for the middle Tennessee region and number two among all state schools. 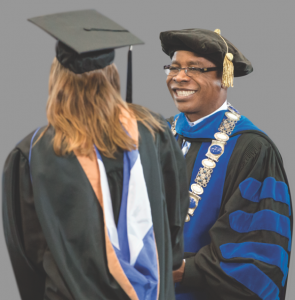 Gov. Bill Haslam recently identified the state’s need for more college graduates in his “Drive to 55” initiative, which calls for 55 percent of Tennessee’s workforce to earn a degree. As our biennial report reflects, we are proud of the role we already play in supplying these qualified workers to our economy. Our graduation rate percentage of approximately 52 percent—a very good rate of graduation for an institution our size—is very close to the 55 percent goal set by Gov. Haslam and higher than the national and state averages for institutions our size and type.

MTSU entered its second century with a clear mission: to increase its already considerable commitment to provide quality education and, in doing so, provide even more college graduates for Tennessee’s workforce.

When we say “I am True Blue,” we are also reaffirming our devotion to student success.