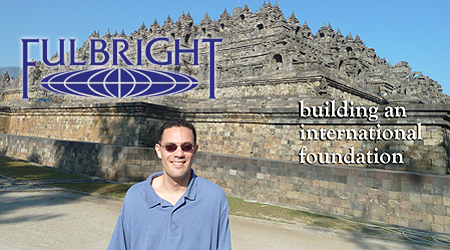 The next superstar of the Muslim world might not be a political activist or a crusading journalist; instead it just might be a Lebanese singer who was raised in Sweden, worked in New York City and lives in Malaysia.

That’s only one of the fascinating insights Dr. Sean Foley gained during his 15-month trip to Southeast Asia in 2010-11.

Funded with his third Fulbright Foundation grant, Foley conducted research at International Islamic University in Kuala Lumpur, Malaysia, and made additional visits to Brunei, India, Thailand, Singapore, Indonesia, China and New Zealand to give presentations at universities in those countries.

Foley, who teaches undergraduate and graduate courses in Middle Eastern and world history, pours the knowledge he acquires during his travels into the classroom at every opportunity. But that’s not the only benefit these trips produce.

“I’ve already had students ask about going to India,” he said. “(It’s) the connections (I make) not only as a scholar, but also in the classroom, both directly with students and what I present to students, but also one-on-one, working with them to develop their own careers as individuals and as scholars and as professionals, as well.”

While in Malaysia, the MTSU associate professor of history became acquainted with and wrote about Maher Zain, the hottest singer in the region. Zain embodies the modern Malaysia, reconciling modern singing with Islamic-themed music and clearly Islamic lyrics.

“He spent virtually no money at all on advertising in the traditional sense of the word,” Foley said in a recent interview on WMOT-FM’s “MTSU on the Record.” (You can listen to the program here.)

“His advertising was done online, on Facebook. One thing I didn’t expect is that Facebook is extremely popular in Malaysia and, in fact, has one of the highest penetrations. Something like 40 percent of the population is on Facebook.”

The prevalence of smart phones and the presence of technology in houses of worship are also indications that Malaysia is combining 21st century modernity with both Islamic traditions and religious and ethnic diversity.

“It’s one thing to think about linking modernity and Islam,” Foley said. “It’s something very different to see it in practice. And it’s not just Islam and modernity. Christians and other peoples do it, as well.”

Sixty percent of Malaysia’s population is Muslim, but the country also has large non-Muslim populations. The government is a parliamentary democracy with representatives of various religions and ethnic cultures elected to the parliament.

“They have strong connections and have been able to build a prosperous society because of those linkages not only to Asia but to the Western world, as well,” said Foley.

Foley’s previous Fulbright-sponsored excursions were to Syria and Turkey. While visiting a sheik in Syria, Foley noticed several people from Southeast Asia in the room. While talking with a neighbor that night, the neighbor asked Foley, “Did you meet any Malaysians?”

The neighbor explained that many Malaysians take side trips to other Middle East countries when they make their annual pilgrimage to Mecca. At that exact moment, a commercial appeared on Syrian television promoting Malaysia as “Truly Asia.” The image stuck and inspired Foley’s latest cultural and historical explorations.

Another feature of Foley’s Southeast Asia experience was his appearance on al-Jazeera’s English-language channel. While at the National University of Singapore to deliver a speech, al-Jazeera’s Kuala Lumpur bureau reached him for comment on the Arab Spring. Foley previously appeared on the network from its home base in Qatar.

“The two parallel networks had lived in different worlds in many ways,” Foley noted. “The English network wouldn’t necessarily cover the Arabic (network) and vice versa. But what was really interesting about what happened during the Arab Spring was that the two began to work together in tandem.”

Of even more importance to Foley was that his parents, who live in California, could watch their son provide up-to-date analysis of one of the world’s most dynamic geopolitical evolutions in real time.