The influence of World War I on the current-day formation and struggles of Middle Eastern nations was the topic of a recent “MTSU On the Record” radio program.

Host Gina Logue’s interview with Dr. Sean Foley, an associate professor in the Department of History, first aired Nov. 13 on WMOT-FM Roots Radio 89.5 and www.wmot.org. You can listen to their conversation above.

Foley, who has traveled in and written extensively about the Middle East, discussed the visit by Dr. Eugene Rogan, a professor of modern Middle Eastern history at the University of Oxford and director of the Middle East Center at St. Antony’s College at Oxford.

Rogan, who presented this fall’s Strickland Visiting Scholar Lecture at MTSU Nov. 15, spoke on “World War I and the Making of the Modern Middle East.”

The Strickland Visiting Scholar program allows MTSU students to meet with renowned scholars whose expertise spans a variety of historical issues. You can learn more about Rogan’s visit here.

This year marks the 100th anniversary of the end of the so-called “war to end all wars.” Foley said World War I marked the beginning of the world’s dependence on oil after Winston Churchill, as Britain’s First Lord of the Admiralty, ordered all British Navy vessels retrofitted to run on oil instead of coal.

“One of the things that the war does with oil is transform oil into the most important strategic commodity in the world,” Foley said. “And that means, the Middle East, already a crossroads with the Bosporus Straits, as well as with the Suez Canal, takes on even greater strategic importance because everybody is interested in getting a piece of that oil.” 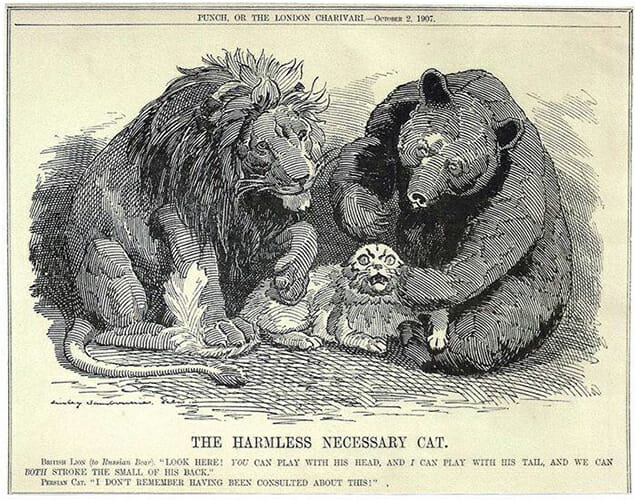 This Oct. 7, 1907, editorial cartoon in “Punch” magazine parodies a secret pact between Great Britain and Russia that included a potential plan to divvy up and control the Ottoman Empire, particularly Persia, as Iraq was then known, and its oil supplies, after World War I. The caption of “The Harmless Necessary Cat” reads “British Lion (to Russian Bear): ‘Look here! YOU can play with his head, and I can play with his tail, and we can BOTH stroke the small of his back.’ Persian Cat: ‘I don’t remember having been consulted about this!'” (Cartoon by Edward Linley Sambourne; courtesy of Punch Limited archives)