The Encyclopedia of Reggae

Co-chairs of the Campaign for MTSU discuss the importance of giving back . . . and paying forward.

Middle Tennessee State University is fortunate that its fundraising campaign is being led by alumni who firmly believe in the University’s ability to promote positive change in the world. Campaign cochairs Pamela Wright and Don Witherspoon have volunteered their time to be advocates for MTSU, rallying support to reach the campaign’s $80 million goal.

Below, Wright and Witherspoon share their perspectives on the campaign and how it will shape the future of MTSU 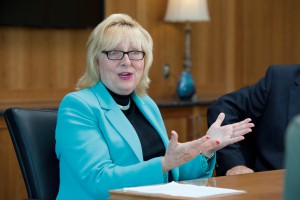 This is the biggest campaign in MTSU history. Why is it so important, and why is now the right time to launch such a campaign?

Witherspoon: One reason this is so important now is the cutbacks that have occurred in state funding.

Education is the answer to a lot of our problems, and with state funding being cut, it is particularly important that we have this campaign underway.

Wright: The campaign’s stated goals are focused on what is really important now, not only for the University and community but the whole nation, which is focused rightly on finance, growth, opportunities, and problem solving. So, now is the time to focus on excellence and how to move MTSU and the country forward. It all ties in to why this campaign is important. 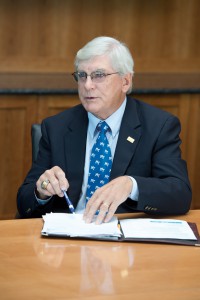 Talk about MTSU’s impact on the local workforce. Is that a reason to support this campaign?

Witherspoon: The role MTSU plays in middle Tennessee is extremely important. First and foremost, if you go into most K–12 schools in this area—and probably throughout the state—teachers will have been trained here. Education is so important in terms of where the country needs to go. And we are training those people who are going to take us there.

Wright: What makes any business successful is the workforce, the quality of that work, and the products and services that we produce. That is strongly linked to education—not only in attracting the best and brightest but also in what happens with their development while here. Hopefully, during this campaign, businesses will see that MTSU’s role in local workforce development is critical to their success. This University feeds so many businesses and creates those successes. So many of us hire MTSU grads, and it’s critical to get the right people as we continue to build our own companies.

In the end, then, what could this campaign mean in terms of taking MTSU and the region to next level?

Wright: To me, it is all about creating leaders for the future, new leaders who can move us forward as a local and regional and national community.

One of the four campaign goals is raising money to provide more scholarships. How important is it to attract the best and brightest students?

Witherspoon: Becoming involved in the campaign opened my eyes to something I wasn’t fully aware of. I’m aware of athletics and how we need to recruit top athletes to compete in the various sports. The concept of recruiting scholars really, to me, was a little bit foreign. But now I have been involved in some activities where I’ve seen what has had to happen to attract these top students to MTSU. We are in competition with colleges and universities throughout the world for top-notch students, and having the financial resources to assist those students in coming here really moves things forward.

This campaign will help us do a better job of that.

Another major component of the campaign is raising money to attract great faculty through the establishment of more chairs of excellence.

Pam, you’re one of the most successful female entrepreneurs in all of Tennessee. You’ve established a chair in entrepreneurship at MTSU. Tell me about that aspect of the campaign since that is where you chose to make your own personal investment.

Wright: A few years ago, when I first began thinking about a major investment in the University, I really wasn’t sure what I wanted to do or how to use my own gift to make a difference. After several discussions about the needs and opportunities available to me, I found my passion—something that was truly important to me, and it was a vital need for the University. Establishing an endowed chair in entrepreneurship has enabled MTSU to bring a nationally recognized expert to campus, where he can be found in the classroom with students, as well as out in the business community providing a valuable link to the University. I realize now that we would not have been able to attract such a noted individual without the chair. The real workplace knowledge that person brings, as well as the potential for research and for community outreach in terms of enhancing the reputation of the University—it can have a transformational impact.

Raising money for MTSU athletics is also a focus of the campaign. Why is that so important?

Witherspoon: Sports are the front porch of a university. It’s an outlet of the full college experience for the students who participate, both athletes and spectators alike. Some scholars might say, “Why is athletics so important?” I think it gives some students a chance that they might not otherwise have to attend college. It also promotes the morale of the University. And it’s a terrific part of campus life.

Wright: The pride of following your team is exciting. It links people who maybe have lost touch with the University or don’t have any connection academically with the University but will follow and support the Blue Raiders because they feel linked to the excitement and pride of that.

Serving on the executive committee of this campaign is a big commitment. Why are you so heavily involved?

Wright: You have to make your own personal commitment before you can ask anyone else to do it. As a person who has worked to have a successful corporate business, it is just extremely important to give back.

Witherspoon: My wife Hanna and I have been able to see the results of the programs we have gotten involved in financially and with our time. We’ve met the people we’ve been able to sponsor scholarships for, and seen real results. We also feel a sense of community with MTSU, and this is one of the ways we express that. In addition to your time, you’ve also put your own money into this effort. Why did you choose to give and what do you hope will be the outcomes of your gifts?

Wright: The growth and success of this community is important, and I believe the entrepreneurship chair I funded can make a difference in the way that we develop students and present opportunities for students. I’m a strong believer in entrepreneurship. It was important that I connected with the University on a need that fit for me, as well. So there was a strong connection there and a good feeling that this was the right thing to do.

Witherspoon: We can see the good that it does when we give. We can see where education is going to take a student and, by extension, this country in the future. That’s our biggest motivator.

Is this campaign exclusively about getting large donations?

Witherspoon: It is not just for major donors. It is for everyone. We are as interested in the small donations as the large. Many times, the publicity of major donors causes us to lose [smaller] contributions. But one of the important things about this campaign, I believe, is that it will increase the number of overall donors. And this increase will be exponential. It will continue and continue this way into the future. We’re already seeing that happen. It’s very important we find those people giving smaller and medium-sized gifts, as well as the larger gifts, in order to make this successful.

Wright: It also gives people an opportunity to be a role model to their kids and really communicate what’s important. We are all telling our kids education is so important, so we need to be showing that and putting some money behind it. It can be a $20 gift, but it is communicating to your kids that you’re supporting education. That’s important. What would you say to someone considering their first gift?

Witherspoon: Would you like a pen? [laughter] The reason my wife and I give is we really think we can make a difference. That’s important to us.

Wright: Outlining the successes of the University and connecting the fact that every small gift is a contribution to those continuing successes—it creates a pride and a connection. Most people can afford to do a small gift. So getting them engaged with the University at that beginning level is so important, as is emphasizing that it doesn’t have to be a large gift.

Witherspoon: Also, there are several areas of the University where we are leaders. Mass Comm. Aviation. Concrete Industry. The [college of ] business. There are other great programs, too. When you put it all together, the sum of those parts just makes MTSU a terrific university. We really need to make sure that message gets out and that people continue to see us in that light.

Wright: We need to also remember the intangible benefits of college. This is a huge population of students, and the impact we make on their lives is huge. We see the grades and the jobs they get, but think about the personal development and the character development that occurs here—that comes from exposure to university life.

Thank you both. –MTSU