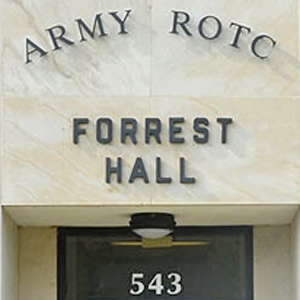 MTSU’s Forrest Hall task force will host an off-campus open forum Wednesday, Feb. 24, to get more community feedback on whether to change the name of the building that houses the university’s ROTC program.

Task force chairman Derek Frisby, who heads the 17-member panel of students, faculty, alumni and community members, said the second public forum will be from 6:30 to 8:30 p.m. Feb. 24 at the Lane Agri-Park, located at 315 John R. Rice Blvd. in Murfreesboro.

Frisby, a Civil War historian and faculty member in the Departmento f Global Studies and Cultural Geography, said it is important for the task force to host an off-campus forum to get feedback from the wider community.

The first forum was held Dec. 1 at the university’s Student Union Building.

The university announced in June 2015 that it would engage the community on the name of the campus building that houses MTSU’s Army Reserve Officer Training Corps program and is named after Confederate Gen. Nathan Bedford Forrest.

MTSU President Sidney A. McPhee asked the panel to recommend by April whether the building should be renamed, retain the name but with added historical perspective, or recommend that no action or change is warranted.

The Tennessee Board of Regents would have to approve any recommended name change. The university is also researching whether other state authorities would have to give approval as well.

Task force meetings are open to the public. For more information about the task force, visit www.mtsu.edu/forresthall.