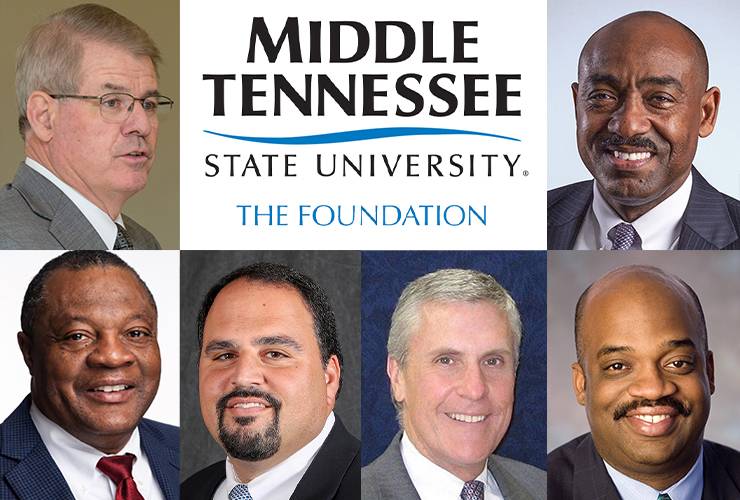 “We’re extremely pleased to add these outstanding community leaders to our trustee roster and look forward to working with them, as we continue to build support our faculty and students and strengthen the university’s programs,” said Joe Bales, MTSU vice president for university advancement who also serves as the executive director of the foundation.

The MTSU Foundation was established in 1961 as a 501(c)(3) tax-exempt organization and is managed by a volunteer Board of Trustees and staffed by MTSU employees. The foundation’s primary function is to receive and acknowledge private gifts to the university. More than 25 MTSU Foundation trustees serve three-year terms.

• Roberts is a managing partner for Nashville-based public relations firm DVL Seigenthaler and leads its client retention program. He is a member of the company’s crisis communications team and also specializes in media training, message development, media relations and strategic planning.

Prior to joining DVL Seigenthaler, Roberts was an assistant director of public relations at MTSU, later moving to the mass communications faculty. He also worked as assistant producer at The Nashville Network (TNN) prior to his MTSU tenure. Roberts earned his bachelor’s degree in mass communication (1984) and his master’s in education (1991) from MTSU.

A 1986 MTSU graduate, Gaines is a previous MTSU Blue Raider Athletics Association board member and currently serves as a team leader with the MTSU Build Blue Campaign.

• A Michigan native, Hassan moved to Murfreesboro as a child in 1979 when his father became an executive with Nissan. A graduate of Oakland High School and MTSU (1998, bachelor’s in accounting), Hassan has worked professionally in the transportation industry since 2000 and has been owner of Specialized Transportation Services since 2006.

• Ussery was promoted to the position of president and chief operating officer of Murfreesboro-based National HealthCare Corp. in January 2017, having served in top executive positions within the company for many years after beginning his career there in 1980. Ussery was honored as NHC’s Administrator of the Year in 1989 while the administrator at NHC Murfreesboro.

Ussery earned his bachelor’s in business administration from the University of Notre Dame in South Bend, Indiana, and his MBA from MTSU in 1989.

• Wright is an attorney of counsel and assistant director of client training at the Nashville office of Ogletree Deakins law firm. He has significant experience in the areas of labor and employment law, corporate business litigation and complex litigation, including class action and collective action lawsuits. Wright is a member of Ogletree’s Diversity and Inclusion Practice Group and routinely provides client advice and guidance on diversity related matters.

Wright earned his bachelor’s in broadcast journalism from MTSU (1992) and his law degree from the Vanderbilt University Law School (1995). He has served on numerous professional and community boards, including past governor of the Nashville Area Chamber of Commerce Board of Governors and current member and past board chair of 100 Black Men of Middle Tennessee.

For more information about the MTSU Development Office and the Foundation, visit www.mtsu.edu/development.