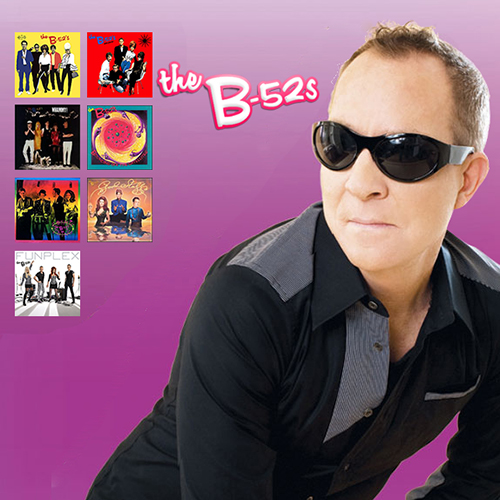 MTSU will hear plenty of good stuff from B-52s frontman Fred Schneider when he visits campus Thursday, Sept. 29, for a special lecture sponsored by the university’s Department of Recording Industry and the Center for Popular Music.

Known for his distinctive spoken-singing style, the poet-musician will discuss his nearly four-decade career in new-wave rock at 4:30 p.m. in the State Farm Lecture Hall in MTSU’s Business and Aerospace Building, Room BAS S-102.

The event is free and open to the public, and a searchable campus parking map is available at http://tinyurl.com/MTSUParkingMap.

Schneider and Ricky Wilson co-wrote “Rock Lobster,” and the entire band collaborated on other B-52s classics, including “Private Idaho,” “Planet Claire,” “Dance This Mess Around,” “Roam,” “Good Stuff,” “Is That You Mo-Dean?” and their biggest hit, “Love Shack.”

“Love Shack,” which was the band’s first charting single after Ricky Wilson’s death in 1985 and their subsequent two-year hiatus, was one of the 365 “Songs of the Century” list by the Recording Industry Association of America and the National Endowment for the Arts and included in Rolling Stone’s list of the “500 Greatest Songs of All Time.”

Schneider, a New Jersey native, attended the University of Georgia intending to major in forestry. He earned an “A” for a book of poetry he impulsively wrote for a final class project and has admitted that he had little musical experience when the B-52s began; his enthusiastic cowbell playing is part of the band’s charm.

Along with his years with the B-52s, Schneider’s had a successful solo music career as well as doing a bit of acting in films that include “The Flintstones” and “The Rugrats Movie.” His newest project is a comedic synth-pop band, The Superions, but he’s still busy touring with the B-52s.

Schneider also recently helped organize a Nashville fundraiser for the family of the late Paul Gordon, a respected guitarist for bands such as the B-52s and the Goo Goo Dolls.

“I’m not wealthy. We only started making money after ‘Cosmic Thing,’” Schneider said in a 2010 radio interview, referring to the B-52s’ fifth album, which was released in 1989 and included “Love Shack” and “Roam.”

“Fred and the B-52s have been a part of and led so many musical movements and produced hits in the 1980s and 1990s,” Dahan said. “It’s a rare treat for our students to hear from such an innovator with longevity.”

You can enjoy Schneider’s work with the B-52s in the award-winning “Love Shack” video and in the Superions’ “Who Threw That Ham at Me?” video below.

The Center for Popular Music and the Department of Recording Industry are part of MTSU’s College of Media and Entertainment.