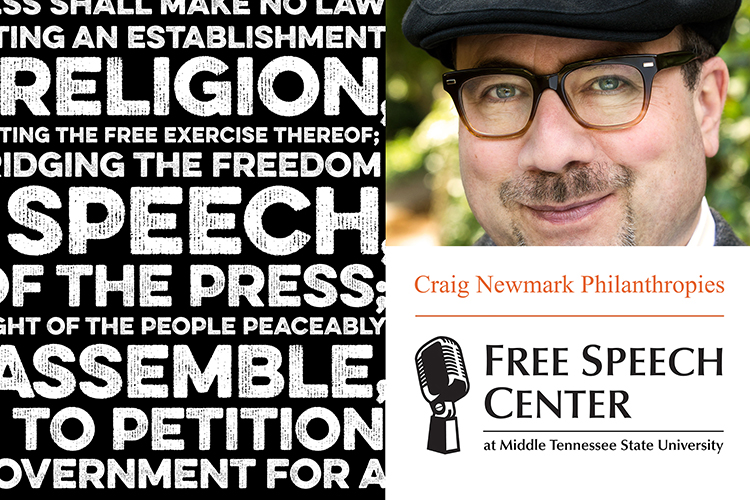 The nonpartisan public policy center, based in MTSU’s College of Media and Entertainment, works to educate the public about the five freedoms they’re guaranteed by the First Amendment: speech, press, religion, assembly and petitioning the government.

The Free Speech Center’s focus is on high schools and colleges across the country, building understanding of the First Amendment through education, information and engagement.

“A trustworthy press is the immune system of democracy,” Newmark said. “Protecting American democracy is an all-hands-on-deck mission, and the Free Speech Center at Middle Tennessee State University plays a serious role.”

Established in August 2019, the Free Speech Center at MTSU’s full resources include the unique First Amendment Encyclopedia, the world’s single most comprehensive free reference work on the first item on the U.S. Constitution’s Bill of Rights.

The center also directs the nonpartisan, nonprofit 1 for All educational project, focusing on ensuring that every high school and college student in America fully understands the five freedoms of the First Amendment. Its initiatives, detailed at http://1forall.today, also build broad public awareness of the First Amendment’s continuing relevance.

Newmark, who began his career in the 1970s as a computer programmer, began what would become “craigslist” in 1995 as an email distribution list to his friends, alerting them to events in the San Francisco Bay Area, where he still lives.

He established craigslist as a web-based service the next year and added other classified advertising categories, then began expanding to other cities in the United States and Canada in 2000. The service now covers 70 countries worldwide and receives 20 billion-plus page views each month.

The site’s growth and revenues have since allowed Newmark to contribute millions of dollars to various causes, including voter registration efforts, military families, consumer privacy rights and women in technology.

His Craig Newmark Philanthropies foundation has also focused its funding efforts on journalism, donating more than $40 million to media initiatives since 2015.

Some of the Newmark recipients include ProPublica, a nonprofit New York City newsroom focusing on public-interest journalism; the St. Petersburg, Florida-based Poynter Institute, a nonprofit journalism training and research organization; and the City University of New York’s journalism graduate school, which now carries his name. 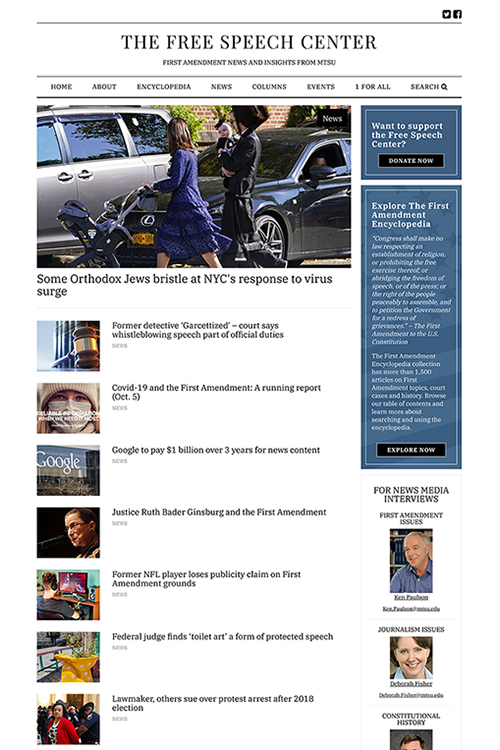 This recent screenshot shows the Free Speech Center at MTSU’s home page, http://freespeech.center, with its daily updates on the First Amendment in the news as well as links to the fully online and searchable First Amendment Encyclopedia, special center events and more. Click through for the latest First Amendment news.