In the News: Fermentation scie.. 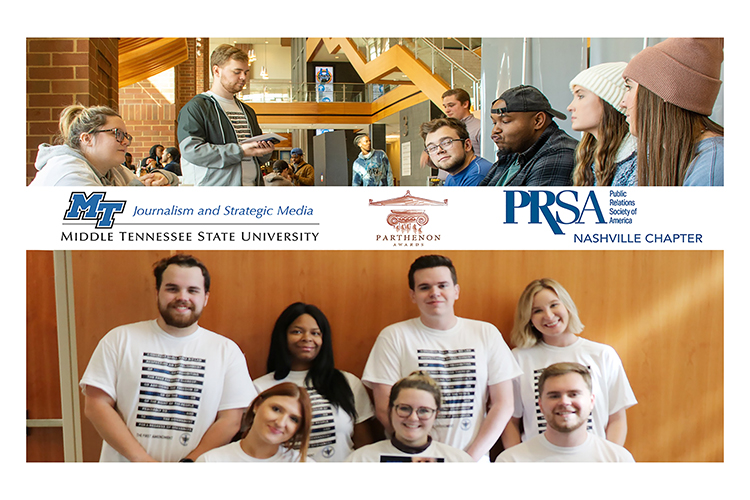 A team of nine MTSU students and alumni is celebrating two 2020 Parthenon Awards earned for a “shoestring budget” public relations campaign last fall to educate their peers about the First Amendment.

“Our PR team worked very hard last fall to engage MTSU students in the First Amendment campaign,” Park said. “They are well deserving of the awards! This recognition will help build our program’s reputation for excellence.” 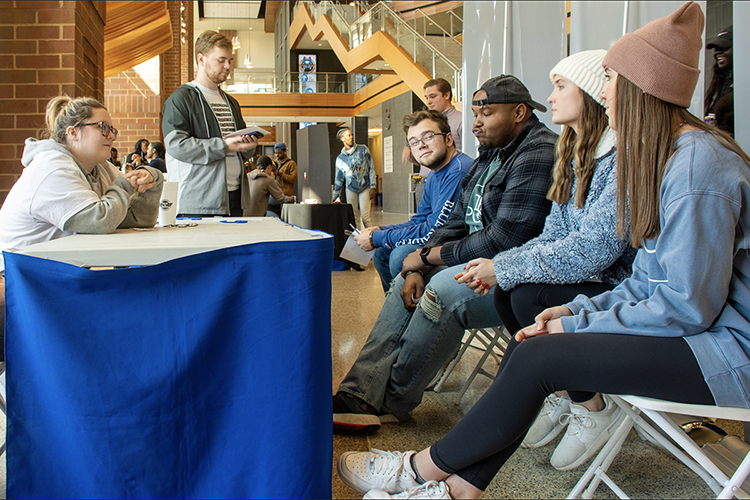 Using a $2,000 national grant from the Free Speech Center at MTSU, which directs the nonpartisan, nonprofit 1 for All educational project, the students created a multifaceted campaign that included:

• A “Freedom Comes First” information booth in the Student Union with 1 for All-themed games, prizes and free coffee and doughnuts.

• A “Freedom Comes First” free lunch that let participants choose whether to temporarily trade their five First Amendment freedoms for a chicken sandwich.

• An Instagram account, @oneforallMTSU, where students could enter prize drawings, learn more about the First Amendment in Instagram Live discussions and post photos of themselves from the information-booth event with a First Amendment-related cutout.

For their efforts, the MTSU participants brought home the top student project award and the prize in the “Most Effective Campaign on a Shoestring Budget $5,000 or Less: Associations/Government/Nonprofit Organizations” category from the Nashville chapter of the Public Relations Society of America at its 34th annual Parthenon Awards ceremony, held online last month in Nashville.

The organization recognizes excellent work by Middle Tennessee industry professionals and students each year with the awards.

• Ashley Carman of Murfreesboro; Katelyn Compton of Nolensville, Tennessee; and Donivous Odom of Murfreesboro, who received their bachelor’s degrees in advertising and public relations last December.

Surveys conducted by the Freedom Forum First Amendment Center, and cited by MTSU’s Free Speech Center, indicate that a third of Americans can’t name a single one of the rights included in the First Amendment. The students’ own research on campus had similar results.

The national surveys also show a vast majority have very little understanding of any of those rights.

“We have supported 1 for All campaigns on 50 campuses, and this is the first to be honored by communication professionals,” said center director Ken Paulson.

The MTSU group spent their grant money on the food and for promotional items with their team-designed logo.

The Free Speech Center at MTSU is a nonpartisan public policy center that works to build understanding and support for the five freedoms of the First Amendment through education and information. Its resources, including the First Amendment Encyclopedia, are open to the public anytime at http://freespeech.center.

The School of Journalism and Strategic Media and the Free Speech Center are part of MTSU’s College of Media and Entertainment. 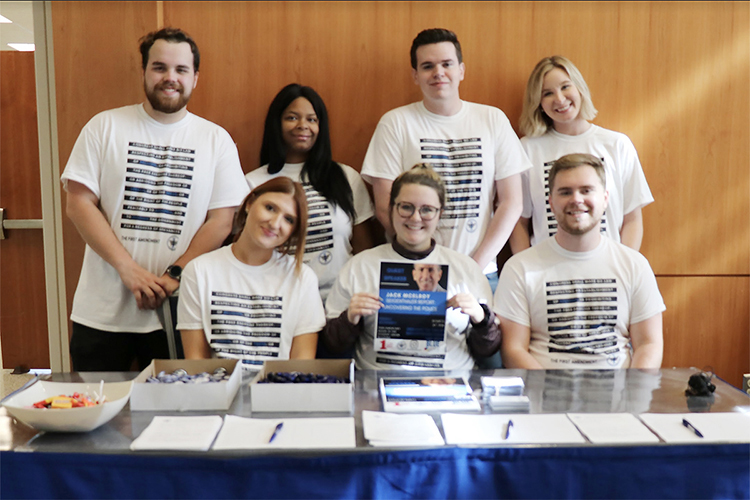 MTSU public relations students pose for a photo before a November 2019 seminar they promoted as part of their award-winning “1 for All @ MTSU: Freedom Comes First” campaign to educate their peers about the First Amendment. Seated from left are Katelyn Compton of Nolensville, Tenn.; Hannah Field of Murfreesboro; and Grant Thompson, a Shelbyville, Tenn., native who now lives in Antioch, Tenn. Standing behind them, from left, are classmates James Whitaker of Murfreesboro; Kintea Webster of Nashville; Jacob West of Gallatin, Tenn.; and Delaney Johnson of Smithville, Tenn. Not pictured are classmates Donivous Odom and Ashley Carman, both of Murfreesboro. The nine-member team recently received two 2020 Parthenon Awards from the Nashville chapter of the Public Relations Society of America for their “shoestring budget” project. (Photo submitted) 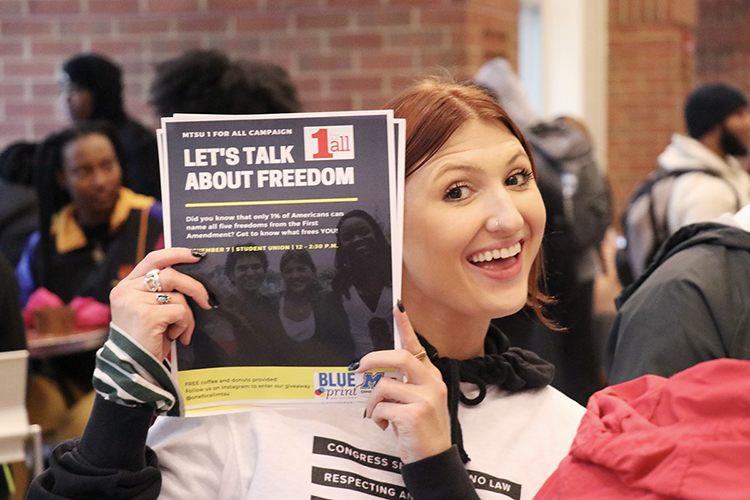 MTSU public relations student Katelyn Compton of Nolensville, Tennessee, displays one of the flyers from her class’s award-winning “1 for All @ MTSU: Freedom Comes First” campaign inside the Student Union in this November 2019 photo. Compton, who received her bachelor’s degree last December, and her eight classmates developed the plan to educate their peers about the First Amendment and recently received two 2020 Parthenon Awards from the Nashville chapter of the Public Relations Society of America for their “shoestring budget” project. (Photo submitted)