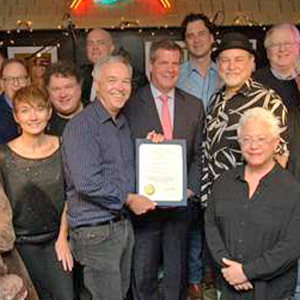 NASHVILLE — Nashville Mayor Karl Dean on Tuesday honored Freedom Sings, a celebration of free speech and music that tours college campuses across the nation, on the occasion of its 15th anniversary, calling it a “critically acclaimed, multimedia experience.”

The mayor appeared at The Bluebird Café between two sold-out anniversary concerts held at the Nashville music landmark to celebrate Freedom Sings’ anniversary.

Freedom Sings, the mayor said in a proclamation, tells an “entertaining, engaging and inspiring story of free speech in America” through “rock, pop, hip-hop and country music.”

The signature program of the Newseum Institute’s First Amendment Center, Freedom Sings features prominent recording artists playing music that has been banned or censored, or has sounded a call for social change.

Ken Paulson, president of the First Amendment Center and dean of the College of Mass Communication at Middle Tennessee State University, expressed his “deepest thanks to the mayor for his incredible support of the music in Music City.”

The Nashville-based center chose to mark Freedom Sings’ birthday during its annual pilgrimage to The Bluebird Café, a 90-seat venue that has gained worldwide recognition as a songwriter’s performance space. It is one of the backdrops used in the hit ABC TV series “Nashville.”

The Freedom Sings project was launched by the center in 1999 with a performance at the Bluebird. Since then, it has toured the United States under the direction of Paulson and Gene Policinski, the institute’s chief operating officer and senior vice president of the center. CDs, a documentary and teachers’ guides have supplemented the show.

The Newseum Institute’s First Amendment Center serves as a forum for the study and exploration of free-expression issues, including freedom of speech, of the press and of religion, and the rights to assemble and to petition the government.

Paulson was appointed dean of MTSU’s College of Mass Communication in July 2013. It is the fifth-largest mass-communication college in the nation and is the only one that features departments of recording industry, journalism and electronic media communication.