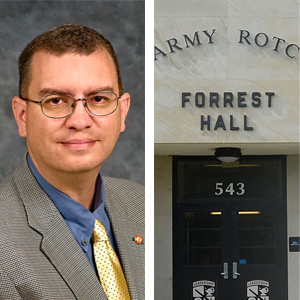 Dr. Derek W. Frisby, a distinguished MTSU professor whose research has examined the Civil War and how cultures memorialize military conflict, was appointed Thursday, Aug. 27, to chair a panel to re-examine whether the university should change the name of Forrest Hall.

The university announced in June that it would engage the community on the name of the campus building that houses MTSU’s Army Reserve Officer Training Corps program. It is named after Confederate Gen. Nathan Bedford Forrest.

The decision at MTSU came following a mass shooting at a historically black South Carolina church that prompted a national discussion about Confederate iconography on public property.

Forrest, a Confederate officer praised for his tactical methods, has also drawn attention recently because of his early ties to the Ku Klux Klan. A state of Tennessee historical panel also is reviewing whether a bust of Forrest should be removed from the State Capitol.

Frisby, a faculty member in the Global Studies and Cultural Geography program in the College of Liberal Arts, was a 2003 military history fellow at the U.S. Military Academy at West Point.

A graduate of MTSU, he has authored numerous articles and essays dealing with Tennessee’s Civil War occupation and serves as a historical consultant to ROTC programs and National Guard units in and near Middle Tennessee.

With MTSU students and others in the background, university President Sidney A. McPhee, left, answers questions from a video journalist from Fox 17 News in Nashville. McPhee addressed students protesting the continuing use of the name of Forrest Hall on the military science building. It is named after Confederate Gen. Nathan Bedford Forrest. (MTSU photo by Randy Weiler)

“I am pleased that professor Frisby, a scholar of Civil War history and an expert in the field of military commemoration, will lead this panel,” said President Sidney A. McPhee, who announced Frisby’s appointment to a crowd of peaceful protesters during a Thursday rally outside Forrest Hall.

“I am confident that he will conduct the panel in a manner that will be inclusive of all viewpoints and perspectives.”

McPhee said the panel will include student, faculty and community representatives. The panel will be tasked to recommend whether the building should be renamed; retain the name but with added historical perspective; or recommend that no action or change is warranted.

The Tennessee Board of Regents would have to approve any recommended name change and the university is also researching whether other state authorities would have give approval as well.

Frisby, who served in the U.S. Marine Corps, is also involved in various campus initiatives as a member of the MTSU Veterans Memorial Committee, which established a monument plaza near the Tom Jackson Building. He frequently conducts courses in Europe and Asia that explore battlefields and the cultural influence of warfare.

“My research has focused on conflict and culture and how societies remember and memorialize warfare,” Frisby said. “These kind of questions are not unique to America — they happen all over the planet.

“We want to put this not only in an institutional, regional and national context but a global context as well.”

MTSU students, alumni and others wanting to change the name of Forrest Hall walk in an organized protest from the Student Union Commons to the building that houses the military science program Aug. 27. Forrest Hall is named for Confederate Gen. Nathan Bedford Forrest. (MTSU photo by Randy Weiler)

Forrest Hall was built in 1954 to house the ROTC program but wasn’t dedicated until 1958, when the name became official. It was chosen because of Forrest’s notoriety as a military tactical genius and his ties to the Middle Tennessee region.

Debate about the university’s ties to Forrest rose periodically through the civil rights era and beyond. The university removed a 600-pound bronze medallion of Forrest from the Keathley University Center in 1989.

Opposition to the name of Forrest Hall didn’t reach its height until 2006-07, when a number of students petitioned to have the name removed because of Forrest’s ties to the Ku Klux Klan.

Others supported keeping the name. The university conducted a series of public forums and decided to keep the name after the Student Government Association rescinded an earlier request to consider a name change and African-American student groups informed university leaders that such a name change was not a priority for them at that time.

Frisby was tasked with researching the institution’s association with Forrest’s image as part of the 2007 discussion on Forrest Hall. His findings were also incorporated into a University Honors Lecture Series and as part of a published collection of essays that marked the university’s centennial in 2011.

Frisby received the 2009 MTSU Outstanding Teaching Award and recently appeared on the National Geographic Channel’s Civil War series, “Civil Warriors,” in an episode that detailed the conditions of Union occupation in the Middle Tennessee region.