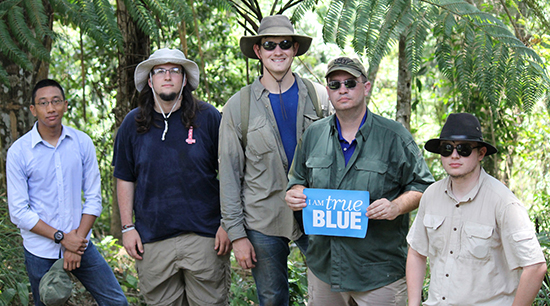 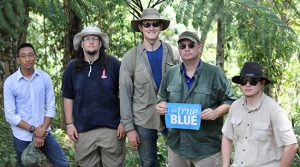 MTSU history professor Dr. Derek Frisby, at right holding sign, is leading a study-abroad group in Vietnam. From left to right, students Tim Chitpanya, Jonathan Essaff, Nathan Abelt, Frisby, and student Austin Duke pose for a photo on Hill 937, known as ÒHamburger HillÓ in Vietnam’s A Shau Valley. MTSU alumnus Jerry Michael Lovell of Shelbyville, Tenn., was killed May 18, 1969, during the Battle of Hamburger Hill in which members of the U.S. ArmyÕs 101st Airborne Division assaulted the hill against stiff enemy resistance. Frisby said Lovell was killed about 800 meters behind where the group is standing. (MTSU photo by Sean Martin)