From Walk-on to Starter to Scholarship

From Walk-on to Starter to Scholarship 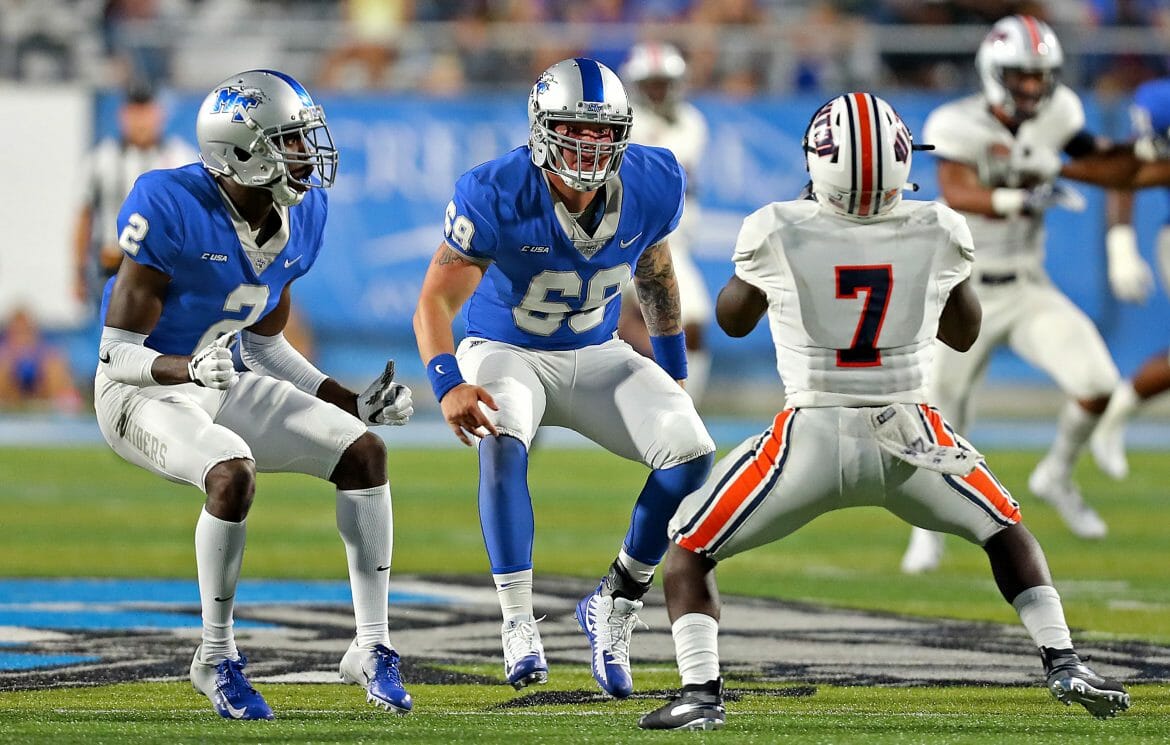 To the organization that I love,

Coming out of high school I had no offers, I played for a football program in high school that wasn’t very successful, and with my grandmother having cancer we couldn’t afford the football camps needed to get the scouts attention. I was planning on going to WKU for a business degree. However, my best friend Dach Diseker had decided to go to MTSU and needed a roommate. He talked me into changing my decision and leaving my comfort zone to go to a school that was further from home.

When I got to MTSU, I was lost. I missed the feeling of being a part of something bigger than myself. Because I had played sports my whole life, I was used to that team mentality. When I learned of the walk-on tryouts, I trained all summer with a former coach. Yet, when the week of the tryouts came I still wasn’t confident enough in my athletic ability to try out.  I remember walking into the dorm and telling Dach that I didn’t think I was going to try out.  I was scared of failure and felt undeserving of the opportunity to be on the field with D-1 athletes.

After a heart-to-heart with my best friend, I had decided it was better to know I wasn’t good enough than to always wonder, “What if?” Little did I know that this was just the beginning to one of the greatest blessings in my life.

Danny Sargent as a Freshman here at MTSU.

At the tryout, there were about 30-40 guys trying out, most more athletic than myself.  As I went through drills, my confidence decreased. I’m simply not the biggest, strongest, or most physically-gifted athlete. However, when it came to positional work my confidence grew. It was all muscle memory, and when I was done a few coaches spoke to me. However, that didn’t mean I would make the cut.  Four days later I was sitting in a general education literature class when I received a phone call from an MTSU phone number. I immediately answered and was asked to come into the football office.   At the end of that day, I was welcomed to the Blue Raider family. My emotions were overwhelmed with excitement and accomplishment. I believe only three of us made the cut.

At my first practice, I was a nervous wreck. I remember being thrown into a scout position immediately. Not knowing anyone and still feeling that I didn’t deserve to be on the field was tough for me. But, the specialists on the team (Canon Rooker, Jim Cardwell, Williams Eads) began to take me under their wing. The coaches and team also welcomed me with open arms.

I remember being in the weight room staying quiet as a mouse and linebacker, Ykeem Wells, asking me why I was being so quiet, and

I said that, as a walk on, I felt I had to earn my respect.

I was speaking to a man who was twice my size, and who had been doing so well for the organization that I had just joined.

Sarge, there is no difference between you, I or anyone else on this team. We all play with a chip on our shoulder and are chasing the same dream. He grabbed my arm and said if you stick with it and work hard then you’ll be as big as I am soon enough.  That was the little confidence boost that I needed to grow hungry for success.

More motivated than ever, I began to grow in this organization.

I grew as a student, I grew as a player, and I grew as a man. That was also the first week that I had the opportunity to run onto the field with the team. It was such an incredible experience. We were playing Vanderbilt: the stands were filled, the fans made the stadium roar, the announcer introduced the Raiders, the flames went up, my world went into slow motion as I realized that I had made it.

I had taken the field as a college athlete and beat the odds.

This was the first of many similar memories. William Eads became a mentor to me as he was listed on the depth chart ahead of me for my freshman and redshirt freshman year. I went to him about everything, as I was eager to learn and anxious to play at the level he did. In 2016, I traveled with the team for the first time to North Texas.

I remember being so proud of myself that I made the travel squad. Calling my dad and telling him the news, knowing that his face lit up with a smile and an “I’m so proud of you, son,” meant the world to me.

I worked for this, I chased this dream, and I prayed for it. Things were starting to fall into place for me. I traveled the rest of the season and continued to be coached up by William Eads. That season was an incredible experience. I had the opportunity to travel, I got meaningful reps, I learned a lot, and I was able to travel to the bowl game.

The next season was my redshirt sophomore year, the year that I had the opportunity to compete for the starting long snapper job. I worked my tail off all off-season. There were many walls I had to knock down to get to the level of play that I knew I was capable of achieving. Eads had graduated but remained a mentor. I also relied heavily on Matt Bonadies, Canon Rooker, and Jim Cardwell. These were the guys that would break down film with me, push me in the weight room, and keep my head up and confidence high when I was struggling. All of which played a role in me having the opportunity to start against the team thirty minutes north.

Everything about that day will always be an important memory to me. From the hotel meetings, the Raider Walk, the moment I stepped on the field.  My world seemed as if it had stopped, and I had more time than I could’ve ever imagined to take it in. All my hard work had finally become a reality.

As the season progressed, I continued to improve. I cherished each moment and realized that this opportunity had changed my life. Not many people get the chance to play at the D-1 level, and not many have the opportunity to be a starter at a major program like MTSU.

That season was one for the books. Our team fought through all obstacles and not only made it to a bowl game but also won the game and a trophy.

As the offseason came, I prepared myself as I always have with passion and purpose. I was more motivated than ever. I was beginning to feel at home as if I actually did deserve this. Spring ball came, and I continued to improve.

At the end of the spring, Coach Stock had a meeting with me.

We talked about a potential scholarship, with the understanding that nothing was guaranteed, but that he believed I deserved one.

The words he spoke to me meant more than the scholarship ever would. Words of encouragement, respect, and belief.

He noticed my potential way before I ever could.  He and the other coaches and players on this team had always invested in me and treated me no different than any other player.

MTSU and the organization as a whole is a true family.  They care for each athlete as if they were their own child, and they invest in as people before athletes. The staff in this organization set us up with the opportunity to succeed not just on the field but off the field as well.

I didn’t hear anything on the scholarship front until 8/15/18. I had already paid and registered for my fall classes, and two days later I was called into his office and got the news I had hoped for.

Beyond thankful for all that MTSU Football organization has offered me in my time here. I can truly say that I’ve become a better student, player, and man in my 3 years due to my Coaches and Teammates. I’m excited and humbled to announce that I have earned a Scholarship!

However, the fact that they decided I was deserving of a scholarship is a feeling that no words can describe. I was emotional, proud, excited, thankful, and overwhelmed by the blessing that my hard work had paid off. My hard work didn’t go unnoticed, and I finally obtained a dream that I had longed for. It’s a humbling experience, one that I will never forget and always be thankful for.

Calling my dad while he was deployed and relaying the news to him was a special moment that will always be close to my heart.

Sargent fired up running on to the field for a game.

Calling my Grammie, who pays for my school, to let her know of the news and to reimburse her for all of her help a feeling that I will never forget.

Being able to thank all of the people who had invested in me, coached me, pushed me, or believed in me was an incredible experience.

The amount of love and passion I have for MTSU is unreal. This university has given me all that I could’ve ever dreamed of and more!  I’m forever a Blue Raider, and I’ll always be thankful for this organization. This opportunity was one of the greatest blessings of my life.  Never think the sky’s the limit because there are footsteps on the moon!