In the News: MTSU faculty touc..

Money raised by MTSU students during the fall semester is going to help the children of fallen military members in December.

The Office of Fraternity and Sorority Life handed a check for $6,864.40 to A Soldier’s Child Foundation Dec. 3 in the Student Union Building. Students raised the funds during the Crash the Commons “Change Wars” Sept. 3-5 on the Student Union Commons.

Leslie Merritt, director of Fraternity and Sorority Life, said Greek organizations and residence halls competed over a three-day period to top their rivals in raising money for a worthy cause. 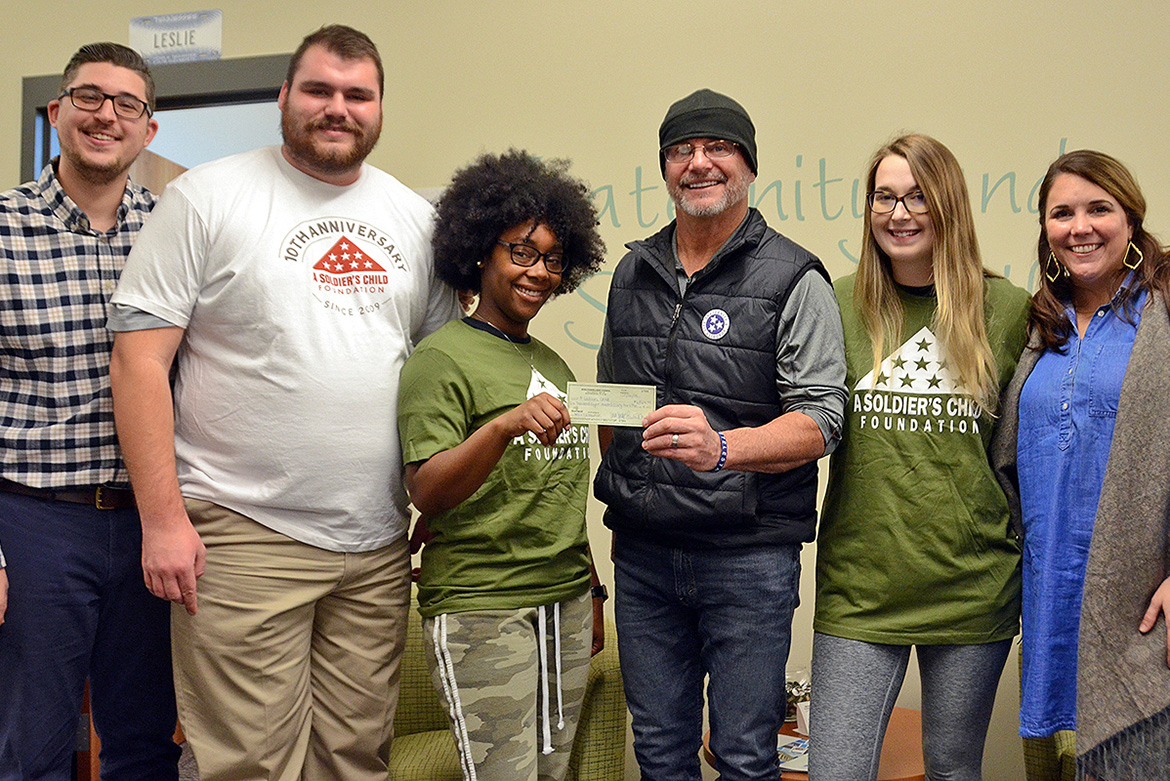 “Any metal change is worth positive points, and, if you put paper money in, it’s negative points,” Merritt said. “Students will put a lot of change into their own buckets, but then they will put paper bills in other teams’ buckets to give them negative points.”

A team made up of Alpha Omicron Pi, Alpha Tau Omega, Kappa Alpha Order and Zeta Phi Beta Greek organizations and Deere and Nicks residence halls won the overall Crash the Commons contest and the right to choose the philanthropy. They picked the Smyrna, Tennessee-based A Soldier’s Child Foundation.

“Our organizations really care about helping those in need and giving back, and, specifically, they wanted to choose a philanthropy local to MTSU and Rutherford County,” Merritt said.

A Soldier’s Child, now in its 11th year, is a nonprofit organization helping children who have lost a parent to military service.

Daryl Mackin, founder and executive director of the foundation, said he was inspired to create the group upon learning that his neighbors lost their son, U.S. Marine Staff Sgt. Marcus Golczynski, to sniper fire in Iraq in 2007.

Mackin, a U.S. Navy veteran, said the Marine’s father asked, “Did it matter, and does anyone even care?” A photo of young Christian Golczynski, Marcus’ son, receiving his father’s flag at the cemetery hangs on Mackin’s wall and reminds him of his purpose.

“We ship packages, these big birthday packages, all over the country to children who have lost a mom or dad in the military,” Mackin said.

According to Mackin, A Soldier’s Child serves about 3,500 children each year and spends $35,000 on birthday gifts each month. The group also funds Christmas presents, 17 camps across the country, college scholarships, a leadership program for adult children who have lost military parents, and Operation Genesis, a project that provides kids with their first cars.

Mackin said MTSU has been very generous in its assistance.

“Over the last six years, we’ve had well over 20 interns from MTSU,” Mackin said. “Some of the coaches have participated in our golf scramble. The college itself has championed A Soldier’s Child Foundation, and I am grateful for it.”

Mackin said the Change Wars donation will be spent specifically on Christmas presents, but the foundation’s overall work will have an impact far beyond this year’s holiday.

“I really, truly believe that our foundation is changing the trajectory of these children’s lives, the path they will take,” Mackin said.

For more information about A Soldier’s Child, go to www.asoldierschild.org. To learn more about MTSU fraternities and sororities, go to www.mtsu.edu/fsl.