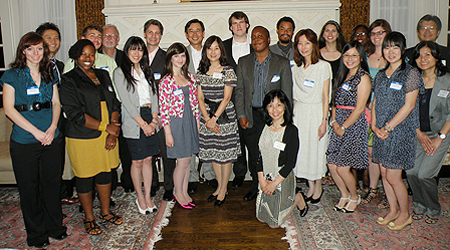 A contingent of 10 students and two professors from MTSU left Nashville June 4 to participate in the cleanup and rebuilding mission in Fukushima, Japan.

On March 11, 2011, an earthquake registering 9.0 on the Richter scale created a tsunami that killed nearly 16,000 people and left more than 3,000 missing on the main island of Honshu. In addition, ocean waves engulfed the Fukushima Daiichi nuclear power plant, sending three reactors into meltdown.

“MTSU has assessed the current situation and consulted with Fukushima University,” says Dr. David Schmidt, vice provost for international affairs. “At no time while engaged in program-related activities will students be in areas where the U.S. government recommends its citizens avoid travel.”

The triple catastrophe left behind an estimated 23 million tons of debris in the hardest-hit coastal areas of Iwate, Miyagi and Fukushima prefectures alone. The Japanese government announced Feb. 21 that the country has cleaned up only five percent of the rubble more than a year later.

The MTSU students are hearing presentations from Fukushima University students, working with other volunteers to clear debris and preparing meals in the Soma district. At the program’s conclusion, they will exchange observations with the Fukushima students.

Not only are the MTSU students intrigued by the opportunity to witness a national disaster firsthand, but they are compelled to help by persistent images of the damaged lives left behind.

“I remember a Japanese woman crying over her lost family member at a function I went to in Nashville,” says Preston Nalls, a mass-communication major from Franklin. “All I could do was just watch … as other Japanese comforted her. I didn’t know her, so although I felt compelled to say something, I just clenched my fist and grieved for her from afar.”

“Sure, we are only going to Fukushima, but that will resonate all over Japan,” adds Justin Bingham, a liberal-studies major from Murfreesboro. “So, in a way, we 10 students are going to help an entire nation. That’s something worth smiling about.”

Each student paid $1,000 to cover all instruction fees, lodging and international airfare from Nashville to Japan. The group is slated to return June 15.