Very few people on the campus of Middle Tennessee State University have been as instrumental to the growth of the institution as track and field head coach Dean Hayes.

Now in his 54th season, Hayes’ legacy, as well as that of the Blue Raider track program, is being featured in the exhibit “A Lasting Legacy at Home and Abroad” on the first floor of MTSU’s James E. Walker Library.

The exhibit, which will run through April 14, is the first in a partnership between the library, Middle Tennessee Athletics, the Blue Raider Hall of Fame and the Albert Gore Research Center. 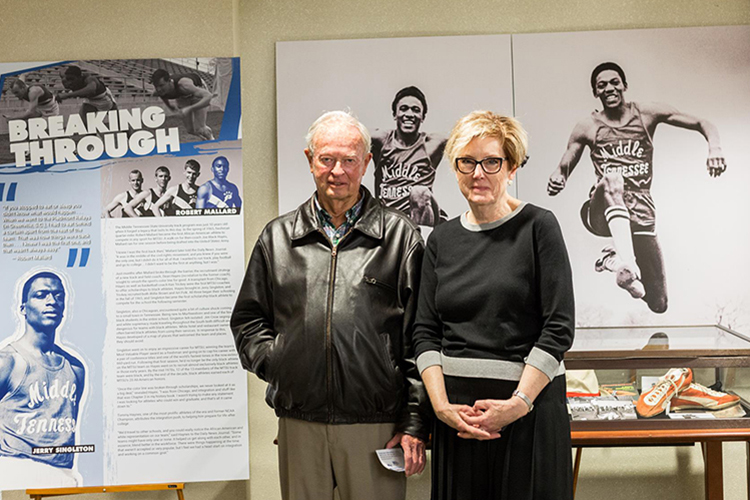 Renowned MTSU track and field coach Dean Hayes, left, stands with Bonnie Allen, dean of the James E. Walker Library, in front of a new library exhibit chronicling highlights and milestones in Hayes’ career and in the history of the university’s track and field program. (Photo courtesy of GoBlueRaiders.com)

“Collaboration for the library has a long history,” explained Bonnie Allen, library dean, “whether it’s with exhibits or special collection or our digital collections. This is yet another example of that as we’ve teamed up with athletics for the first time, and I’m really happy about it.”

The exhibit actually begins its story in the year before Hayes took over the program.

Robert Mallard, a Murfreesboro native, became MTSU’s first black athlete in the spring of 1965. Months later, Hayes was hired as the new head coach, and in one of his first acts at the helm of the team, he offered a scholarship to Jerry Singleton, who became the first scholarship athlete to officially compete for the Blue Raiders the following spring.

From there, Hayes would continue to recruit black athletes to campus. Only a decade after Mallard was the lone black athlete on the track team, the ratio was effectively flipped. Hayes also served as the first adviser for Kappa Alpha Psi, which was the first black fraternity on campus.

“I’m thrilled the idea came up to honor Dean Hayes and the excellence he’s provided this university over the last 54 years,” said Jim Simpson, who serves as the director of the Blue Raider Varsity Club and oversees the Hall of Fame.

“I’m also glad that the exhibit features how integral the track program was in helping this school transform to the diverse institution that it is today. It’s a thrill for me to see that.”

In his 54 years at MTSU, Hayes has won 53 conference championships, which includes the recent Conference USA indoor crown, seen his athletes rack up 117 All-American awards and mentored 14 Olympians.

Hayes also memorably served as the jumps coach for the United States in the 1988 Olympic Summer Games, which featured Carl Lewis and a 1-2-3 finish for the Americans in the long jump. Hayes was also an official for the 1996 Summer Games in Atlanta. A decade ago, MTSU renamed its track and soccer facility in his honor.

The library exhibit, which is located just beyond the elevators on the first floor, features photos from those early days, Midlander yearbooks and a number of items from the history of the program. Many are on display for the first time since their donation to the Blue Raider Hall of Fame.

For more information as well as the hours of operation for the library, visit library.mtsu.edu. 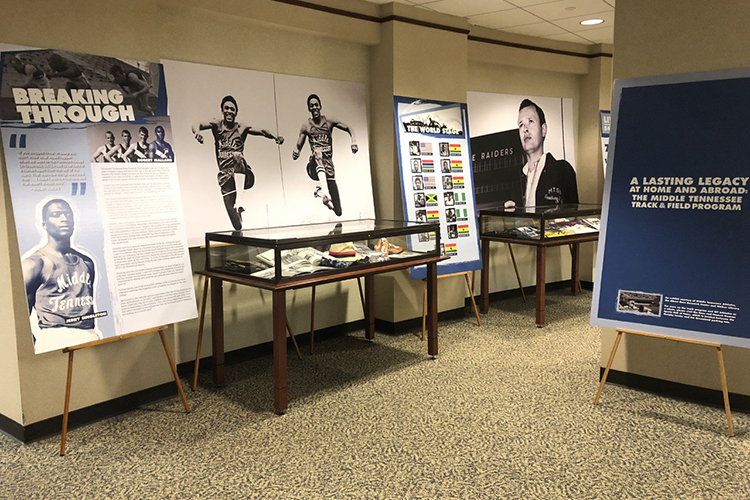 The new MT Athletics exhibit on the first floor of MTSU’s James E. Walker Library focuses on internationally renowned coach Dean Hayes and the team’s stellar history over its 5-plus decades. The exhibit, which will run through April 14, is the first in a partnership between the library, MTSU Athletics, the Blue Raider Hall of Fame and the Albert Gore Research Center. (Photo courtesy of the Blue Raider Hall of Fame)