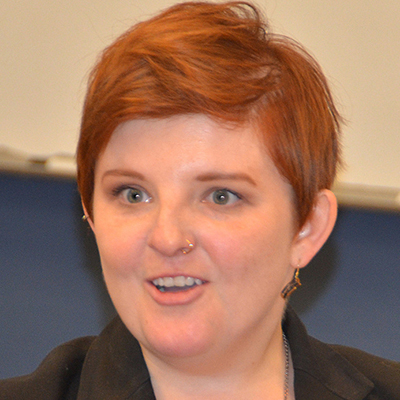 In the midst of a four-day visit to the MTSU campus she attended as an undergraduate from 2004 to 2008, Dr. Jessica Morrison will share about the career path that has taken her from Tennessee to Washington, D.C.

Morrison, who majored in geosciences at MTSU, will speak at 7 p.m. Thursday, March 3, in Room S328 of the university’s Business and Aerospace Building. A searchable campus parking map is available at http://tinyurl.com/MTSUParkingMap.

Her talk is open to the public and is a Women in Science Invited Lecture that is a part of National Women’s History Month activities.

Morrison is an assistant editor on government and policy for Chemical and Engineering News, the weekly journal of the American Chemical Society.

Her fields of interest include nuclear research and development, hazardous waste, water pollution, critical materials, the federal budget and biotechnology.

For a second scheduled talk that is open to the public and campus community, Morrison will speak at 3 p.m. Friday, March 4, in Science Building Room 1191.

Morrison earned her doctorate from the University of Notre Dame. She has interned at The Charlotte Observer and Chicago Tribune.

MTSU geosciences students and faculty listen as MTSU alumna Jessica Morrison discusses her career as a writer and assistant editor with Chemical and Engineering News, the weekly journal of the Washington, D.C.-based American Chemical Society, during a campus visit March 2 in Kirksey Old Main. Morrison (Class of ’08) also will speak Thursday, March 3, in BAS S328, and Friday, March 4, in Science Building 1191. (MTSU photos by Randy Weiler)