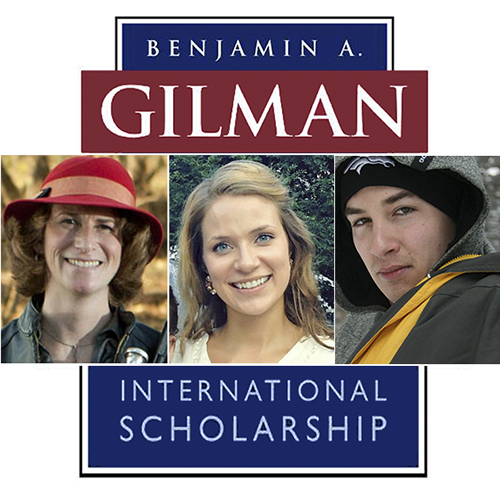 Three MTSU students have been honored with one of the most illustrious study-abroad scholarships in the nation.

Elizabeth Enck, Michele Kelley and Nathan O’Connell are 2014 recipients of the Benjamin A. Gilman International Scholarship, sponsored by the U.S. Department of State’s Bureau of Educational and Cultural Affairs.

Gilman scholars receive up to $5,000 to apply toward education-abroad program costs. The winners from MTSU are among the more than 1,000 American undergraduates from 358 colleges and universities across the United States selected to receive the award.

“The Gilman Scholarship has been one of the most successful in diversifying the participation pool and the program location of education abroad for U.S. university students,” said Dr. David Schmidt, vice provost for international affairs.

“Additionally, it is one of the most competitive and prestigious, so we are extremely proud of our student recipients.”

Enck, a senior university studies major from Rockvale, Tennessee, will study in Nepal this summer. She said a comparative religions class taught by Dr. Jenna Gray-Hildenbrand, an assistant professor of religious studies, piqued her interest.

“I had been interested in eastern philosophy, the Everest region and the Sherpa culture for some time,” Enck said, “but when I found out about the diverse cultural and religious aspects of Nepal, it seemed like one of those places one should visit in their lifetime.”

“Professionally, I’m interested in traveling and documenting the celebrations, rituals and festivities of different cultures and subcultures,” Enck said.

O’Connell, a senior music education major from Las Cruces, N.M., chose Costa Rica as the site of his summer education.

“I am half-Irish on my father’s side and half-Latino on my mother’s side,” O’Connell said, noting that his mother came to the United States from Central America when she was 10 years old.

“Her struggle to adapt to a new culture in a foreign country has been a source of inspiration to me throughout my life and during my educational career,” O’Connell said.

He also noted that the study-abroad experience will enable him to add Spanish as a major and graduate from MTSU with two degrees.

“Most importantly, however, I want to become fluent in the Spanish language because of the impact that skill will have on my life as a professional educator,” O’Connell said. “I want to be the kind of teacher who can help people like my mother adapt to a new way of life and yet still be comfortable enough with their heritage to express themselves freely.”

Kelley, a junior with double majors in aerospace and physics, said she chose to study in the Czech Republic because she knew it would be outside her comfort zone.

“Though I’ll be taking Czech language courses, I will still have to learn to thrive in an environment that is completely foreign,” said the honors student from Murfreesboro.

“I think that it is the point of studying abroad — learning to not only thrive in a foreign country, but to understand its beauty and complexities.”

Kelley said she hopes to work outside the United States, but her appreciation of studying abroad goes beyond professional opportunities.

“I view it as a vital part of my education,” she said. “What I really wish for, though, is for spending two months in the Czech Republic to give me a lasting experience that I will carry with me.”

For more information about MTSU opportunities to study abroad, call the Office of Education Abroad at 615-898-5179 or send an email to educationabroad@mtsu.edu.