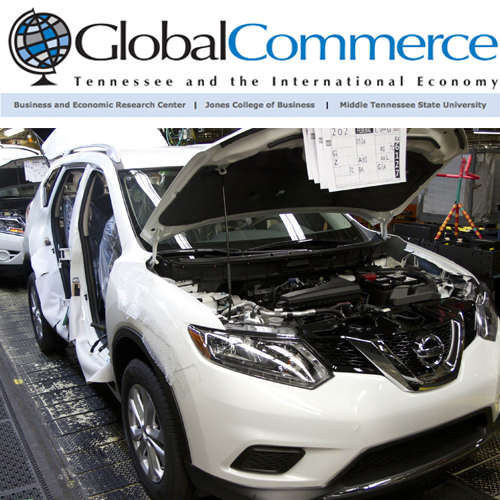 MTSU’s Business and Economic Research Center explores the trade relationship between Tennessee and Mexico in its latest “Global Commerce” report.

Report author Steven Livingston notes that Mexico “is a large part of Tennessee’s economy,” with the Volunteer State exporting almost $5 billion to Mexico in 2015 while importing $7 billion that same year. The report comes as President Donald Trump and his administration scrutinizes the relationship with the key trade partner along the country’s southern border, including the North American Free Trade Agreement, or NAFTA.

The Tennessee-Mexico trade relationship, a good deal of which is concentrated within the automotive industry, “is larger than the entire economy of the Clarksville or Kingsport areas,” stated Livingston, a political science professor and editor of Global Commerce. “Only eight American states export more to Mexico, and only four import more.”

View the full “Global Commerce” report, including maps and charts, at http://capone.mtsu.edu/berc/globalcommerce.html.

In 2015, 15 percent of Tennessee’s foreign shipments went to Mexico, while 9 percent of its imports came from Mexico, the report states. The majority of exports to Mexico were destined for states where U.S. automakers have manufacturing operations.

“For the most part, it’s not a matter of exchanging products but of sharing supply chains,” Livingston noted about the auto industry trade. “Policies that aim to change that would certainly have a significant impact on the Tennessee economy and in ways that would be difficult to predict.”

For more information about the report, contact Livingston at 615-898-2720 or email steven.livingston@mtsu.edu.

These charts shows the value of trade (exports and imports) between Tennessee and Mexico since 2010 as well as the percentage of Tennessee’s overall trade that involves Mexico. (Source: MTSU Global Commerce Report)