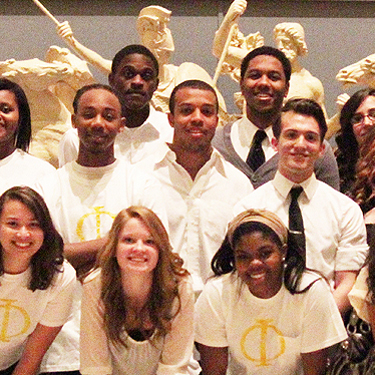 MTSU students played a part in a recent arts performance that will soon be on exhibit across Tennessee and will ultimately travel to Athens, Greece, for an international arts education exchange.

During the performance, young people with disabilities used music, dance, poetry and the visual arts to explain the mathematical concept of the Golden Ratio, an irrational number that has ties, either by design or coincidence, that can be found in nature, architecture, the human body and even the universe.

Members of an MTSU organizational communication class pose for a photo at the feet of the Athena statue inside Nashville’s Parthenon Dec. 5. The group provided funding for the VSA Tennessee “Golden Ratio Project” and also served as volunteers.

The performance was a result of workshops and residences conducted this fall through VSA Tennessee to help children connect to math. VSA Tennessee is a statewide nonprofit organization that provides resources, tools and opportunities for arts programming for people with disabilities.

Kissinger, who teaches organizational communication at MTSU, said the works of art from the program, as well as a DVD of the performance, will travel across Tennessee for exhibitions before heading to Athens for the international event.

VSA Tennessee is an affiliate of VSA, the international organization on arts and disabilities founded in 1974 by Ambassador Jean Kennedy Smith. VSA was formerly known as Very Special Arts.