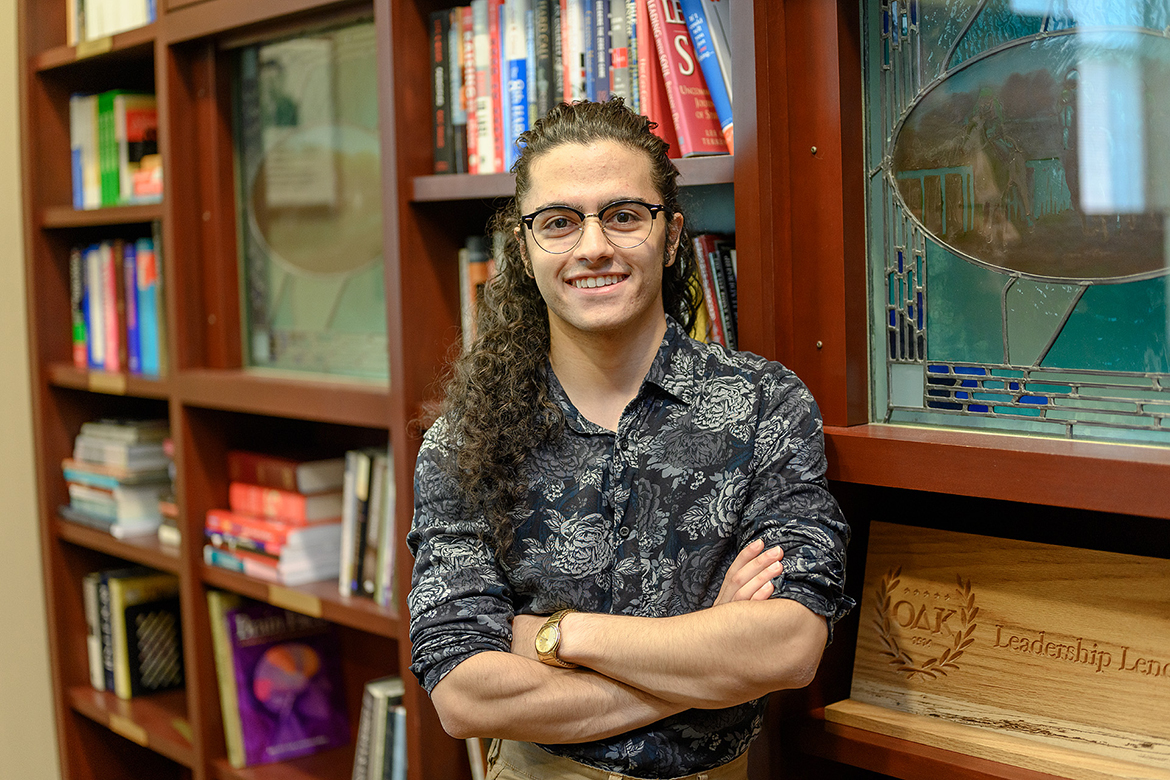 Two years later, thanks to a freshman-year nudge by biology professor Frank Bailey, the now-rising junior is totally into research — a true match for MTSU’s elevated status as a Carnegie R2 (high research activity) university earlier this year.

This year, Ginnab, 20, who is from Nashville, Tennessee, received a prestigious Barry M. Goldwater Scholarship to pursue research and this summer he is spending three months in Nova Scotia, assisting with a Canadian Fulbrightproject as part of the MITACS Globalink Internship Program.

The Goldwater scholarship is named after the late former U.S. senator from Arizona, who served in Congress for 30 years and had a strong interest in science and technology. It is among the highest awards undergraduates majoring in science can receive.

The Fulbright-MITACS Globalink is intended for U.S. students interested in going to Canada to undertake advanced research projects in their area of interest. Ginnab applied and interviewed for seven internships. He was matched with is professor and biologist Gavin Kernaghan of Mount Saint Vincent University, “looking at polypores in the forest and documenting which fungi species are growing on which tree species, and whether they’re on living, dead standing or fallen trees — plus a lab component,” Ginnab said.

The Goldwater award provides funding for up to $7,500 per year to cover the cost of tuition after other scholarships.

“It means a lot to me,” Ginnab said of the award. “It signifies the start for my graduate school career, even though the scholarship is for my final year in undergraduate. It tells me that once I start graduate school, I’m a lot more confident in myself. I think I’ll be more successful than I was thinking beforehand.

“Being labeled as a ‘Goldwater scholar’ is so extremely important, as it puts me on a list of undergraduates who receive this recognition before they have gone to graduate school. It’s a recognition that we have a high potential to contribute a lot to the field of research.”

Ginnab praises Laura Clippard, who coordinates the Undergraduate Fellowship Office for the Honors College, for assisting with his Goldwater application. It took three months of writing and revising to make it happen, he said.

A growing group of mentors

Crediting faculty and advisors, Ginnab said “MTSU has been responsible for my career path in research. Anyone who I’ve met has been — if I engage a conversation with them, they are incredibly engaging. They love to just talk with me. … (Dr. Bailey) noticed that I had, I guess, the mindset of a researcher.”

“Dr. Bailey connected me with Dr. Herlihy (first official research opportunity),” Ginnab said. “I met Dr. Walck through the research with Dr. Herlihy. Dr. Walck’s written me some letters of recommendation, and recommended I enter his graduate course, ornithology, or bird watching.” Ginnab took that class this spring.

“Yaseen has been involved in field research with my lab over the past two years,” Herlihy said. “He has been an important part of the research team, and has contributed greatly to our endangered species research.”

Walck, Herlihy and their research team are conducting research associated with the federal species recovery plan for the endangered plant Astragalus bibullatus (Pyne’s ground plum), found in Rutherford and Davidson counties and nowhere else in the world.

“Yaseen has been a great help with pollinator observations,” Herlihy said. “He has logged countless hours in the field observing and identifying pollinators and documenting their behavior.”

Noting Ginnab’s 3.95 GPA, Herlihy said the student “has tremendous potential as a researcher going forward in his career.”

For his Honors thesis, Ginnab will be looking at a plant that’s endemic (found in only one location worldwide) to the Middle Tennessee cedar glades — Astragalus tennesseensis or Tennessee milkvetch, checking its ability to accumulate a metalloid or toxin (selenium) from the soil.

After eventually graduating from MTSU, Ginnab wants to pursue a master’s degree and doctorate, with McGill University in Montreal, Canada, his first choice.

“The reason I’m considering going to Canada is the Fulbright internship I received this summer,” Ginnab said. “They also offer a graduate school fellowship for all alumni of this internship. We would receive funding for up to one year in graduate school. So, that opened up the option for graduate school in Canada.”