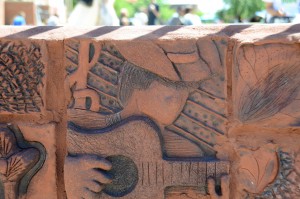 What many saw as a pedestrian traffic barrier, art professor John Donovan saw as an opportunity. Donovan and his students are the artists behind the new ceramic wall mural recently installed between the KUC and Todd Hall. As the art project took shape, it became a hot topic among students and faculty alike on the campus of MTSU.

“The wall was really an eyesore,” says Donovan. “And I just thought of it as a canvas. It presented itself very strikingly in a predominant spot, as far as people always being around it.”

To Donovan’s thinking, the wall presented the perfect opportunity to engage students in his 3D Design course, not only as a hands-on learning experience, but also as a chance for students to really invest pride in their final product given it would be so prominently displayed.

“People would get through the class in the past and their pieces would end up in the dumpster,” Donovan says. “It was just heartbreaking. I felt like there had to be a way to get more of a sense of ownership or value to the work.”

Since his idea required the purchase of more materials for grouting, installing and sealing than could be covered by student lab fees, Donovan applied for an instructional development grant. The grant, which he secured, is designed to help the faculty to enhance their teaching, whether it is in the experience students have in the classroom or how students are evaluated in their performances.

It’s not the first time Donovan has transformed a non-descript brick wall using ceramics. Before Donovan became a teacher, he worked at Stonehaus Architectural Ceramics in Pensacola, Florida. While there, he began working with clay on a grand, architectural scale.

“You typically think of clay as a functional medium – things we hold, or more intimate pieces. But there’s a really rich history of clay being used on a large, architectural scale,” he says. “I’d never really connected what I’d done in Florida, as far as architecturally, to a classroom. This was the first time that’s happened, so it’s been a real treat…It’s been a really nice chance to take something I have prior experience with and inject it into the classroom.” 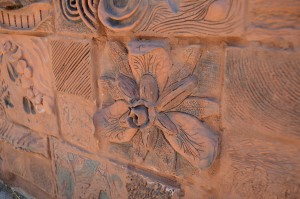 Donovan’s guidelines for the class project were simple. Students were to design a 12×12 tile based on an indigenous plant, animal, insect or other icon, as long as it connected to the Middle Tennessee region. Each tile needed to have a distinct foreground, middle ground and background, encouraging the students to explore and manipulate depth. From start to finish – including the process of researching, designing and sculpting their tile — students invested anywhere from 15 to 30 hours in their individual tile of artwork. One of the final steps in completing the tiles involved covering the entire surface of each tile with a stain and then wiping it out, a process designed to create higher contrast value and show more texture detail. Donovan explains this challenged students to “work reductively and deal with the whole rather than pieces of the whole.”

“They use that technique in drawing classes a lot. Instead of drawing something on the corner of the page, it forces students to work with the whole piece of paper. We did something similar here, and it really calls attention to textures. You can even find fingerprints in a lot of them. You can literally find the signature of the person who made it, which you never would have seen unless the tiles had been stained and wiped out.”

As a foundations level course, the class isn’t restricted solely to art students. “There are a lot of hands in it,” says Donovan. “It’s not just two or three art majors who have worked on this mural.”

Consequently, he says the art wall serves as a good representation of the campus community. “For some kids, this might be the only piece of art they make. They might go into a field that is more technical, or more structured. But were they to come back for an alumni event in 20 years, they can find that one tile and point it out.”

The tiles are now installed and the project completed after nearly three semesters of investment and commitment from Donovan and his students. Pleased with the final product, Donovan hopes it encourages similar assignments in the future. There are plenty of other walls on campus, after all.