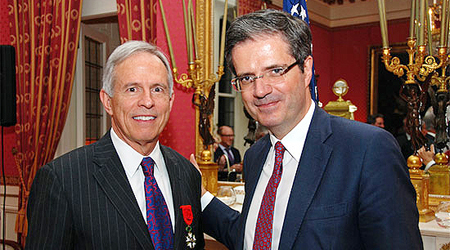 MTSU alumnus and former U.S. Congressman Bart Gordon has been honored with the designation of “Officer” in the French Legion of Honor for his nearly 30 years of public service, including his focus on innovation, science and technology.

MTSU alumnus and former Congressman Bart Gordon, left, is shown with French Ambassador Francois Delattre at a ceremony to announce Gordon’s designation as an Officer in the French Legion of Honor. (photo submitted)

“It is France’s highest distinction and one of the most coveted in the world,” French Ambassador Francois Delattre said during a ceremony announcing Gordon’s honor. “The president of France has decided to promote Congressman Gordon to the rank of Officier (Officer), which is exceptional, illustrating France’s deep gratitude for his personal commitment to French-American relations and friendship.”

According to the French embassy in Washington, D.C., Napoleon Bonaparte created the Legion of Honor in 1802 “to reward extraordinary accomplishments and outstanding services rendered to France, based on a personal decision by the president of the French Republic.”

Gordon, now a partner with the law firm K&L Gates in Washington, spent 26 years in Congress representing the 6th District, retiring in 2010. The Murfreesboro Democrat served as chairman of the Science and Technology Committee and was a strong proponent of improving science and technology education.

Delattre pointed out that Gordon, as a member of the French Congressional Caucus, “advocated for a strong French-American bilateral relationship, meeting with visiting French delegations, traveling to France to meet with your French counterparts and promoting the importance of our two countries working together.”

Gordon enhanced collaboration between France and the United States by fostering cooperation between NASA and the French Space Command, Delattre said. He also led congressional delegations to France to learn more about nuclear energy and recycling projects.

Gordon continues to be involved in think tanks and other programs aimed at strengthening collaboration between Congress and the European Parliament, Delattre added.

The Legion of Honor is divided into five different ranks. The most common are Chevalier, or Knight; Officier; and Commandeur, or Commander. The top levels, Grand Officier and Grand Croix, or Grand Cross, are usually reserved for presidents and other world leaders.

The honor is typically bestowed upon French military recipients, entrepreneurs, high-level civil servants and other business executives — always at the initial Chevalier level. Foreign recipients, like Gordon, can enter the order at a higher level, depending on their overall body of work.