Smith-Walters one of Project L.. 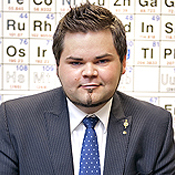 Award-winning May MTSU graduate Daniel Gouger added to his many honors just before commencement—he learned he had received a Fulbright U.S. Student Program Scholarship to study in Spain.

Gouger, who is from Jasper, Tenn., will leave in September and study at the Institute for Research in Biomedicine, focusing on molecular dynamics and molecular modeling until June 2013.

“I was really overwhelmed—excited, overwhelmed and humbled,” Gouger said.

The U.S. Department of State’s Bureau of Educational and Cultural Affairs funds the Fulbright Program, one of the world’s most prestigious international educational exchange programs. Recipients are chosen on the basis of academic or professional achievement and demonstrated leadership potential.

He becomes the second MTSU graduate to receive a Fulbright this year. Anna Yacovone, a December 2011 graduate from Sevierville, Tenn., was awarded a Fulbright scholarship to Laos (mtsunews.com/yacovone-fulbright).

A May 2008 graduate of Marion County High School, Gouger graduated from the University Honors College, where he was a charter member of Omicron Delta Kappa and a member of Phi Kappa Phi and served three years as president of the Honors Student Association.

MacDougall, a chemistry professor,  “guided me from an academic standpoint and helped to develop a scholarly attitude” and opened the doors for Gouger’s opportunity in Barcelona by carrying the student’s resume to Spain and securing a professor/mentor at the institute.

Dunlap, a chemistry professor, “opened my mind to the world of medicinal chemistry and really mentored me as a scholar and a student. … She helped me grow through the thesis process and been my go-to professor for the last three years,” Gouger said.

And Novella, a professor in foreign languages, “taught me a lot about Spanish and Spanish culture” and “helped motivate me to go into the medical profession.” Novella’s battle with cancer—she’s now five years cancer-free—further inspired him.

“I hope to one day impart upon my future patients the same care and leadership that she’s been able to give me,” Gouger said.

Eight years ago, when Gouger was 15, the death of his father, Thomas, also influenced his decision to study medicine.

Even while earning 195 almost-perfect credit hours (the University’s minimum requirement is 120), Gouger found time to work as a global ambassador and student representative at MTSU for International Studies Abroad, promoting international education on campus. He also was a peer career adviser for the Career Development Center and worked three years as a mentor and tutor in the Student-Athlete Enhancement Center.