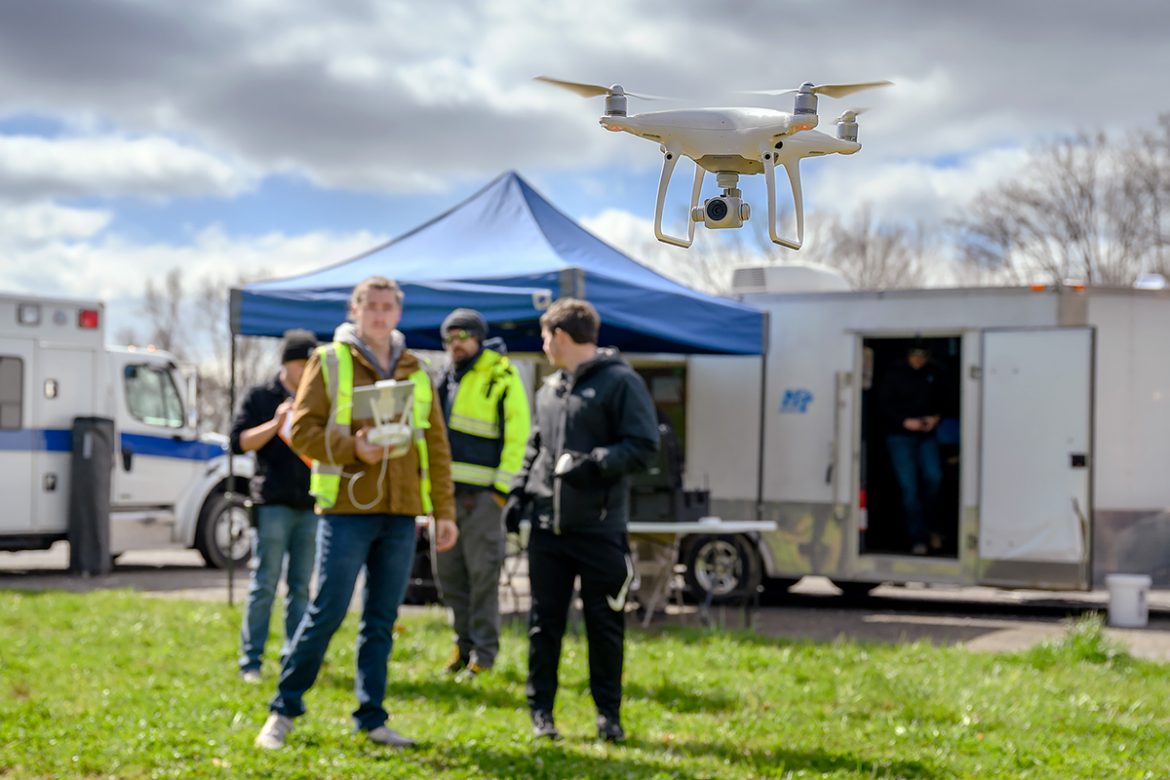 Daryl Hickman of Murfreesboro, Michael Clancy of Franklin, Tennessee, Corwin Cordell of Chattanooga, Tennessee, Aidan Galdino of Brentwood, Tennessee, Calvin Harris of Snellville, Georgia, and Zackary Whittle of Lafayette, Georgia, spent most of April 1 on a mapping mission at remote Cummins Falls State Park, utilizing drones and other sophisticated UAS technology most will be using in careers after graduation. 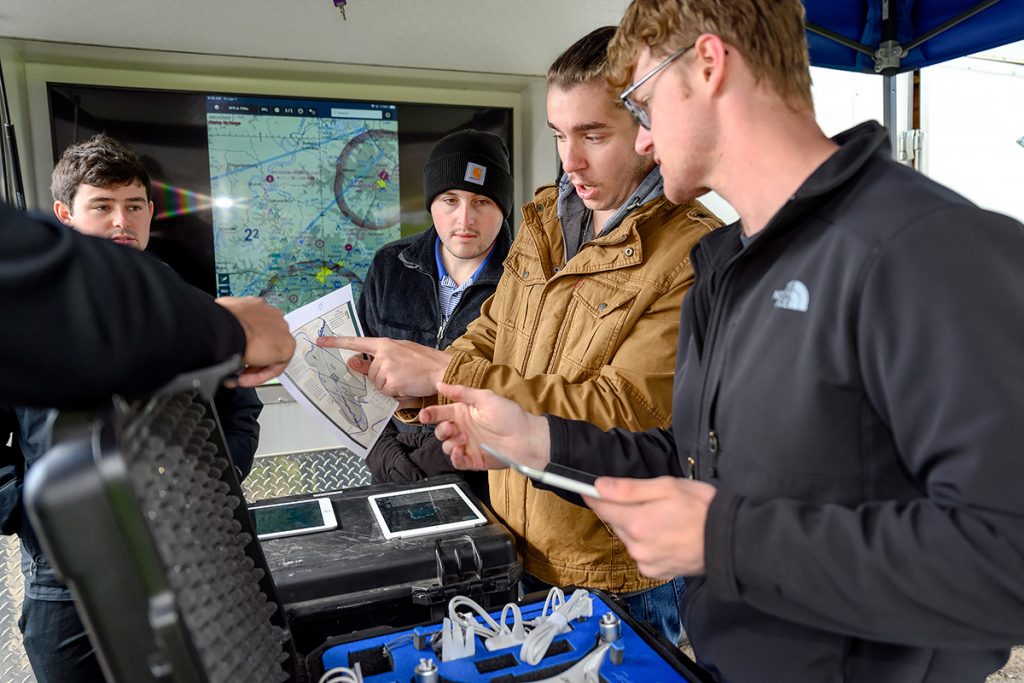 Since early February 2021, authorities had been searching for missing hiker Robert “Bob” Qucsai, an attorney from Ohio. Drones, helicopter surveillance and numerous searches had come up empty until March 29 when his remains were finally discovered in the 282-acre Jackson County park near Cookeville.

Corns’ students were up for the mapping challenge

“You can’t duplicate this anywhere else,” said assistant professor Kevin Corns, surveying the students’ in-the-field study at the park.

“We’ll measure this by the end results, including what went right and what they would do differently,” he added. “As long as we can go out and capture the data and take that data and turn it into useful information for our stakeholders (state park officials), then it will truly be a success, but just the learning experience alone is above and beyond anything else.” 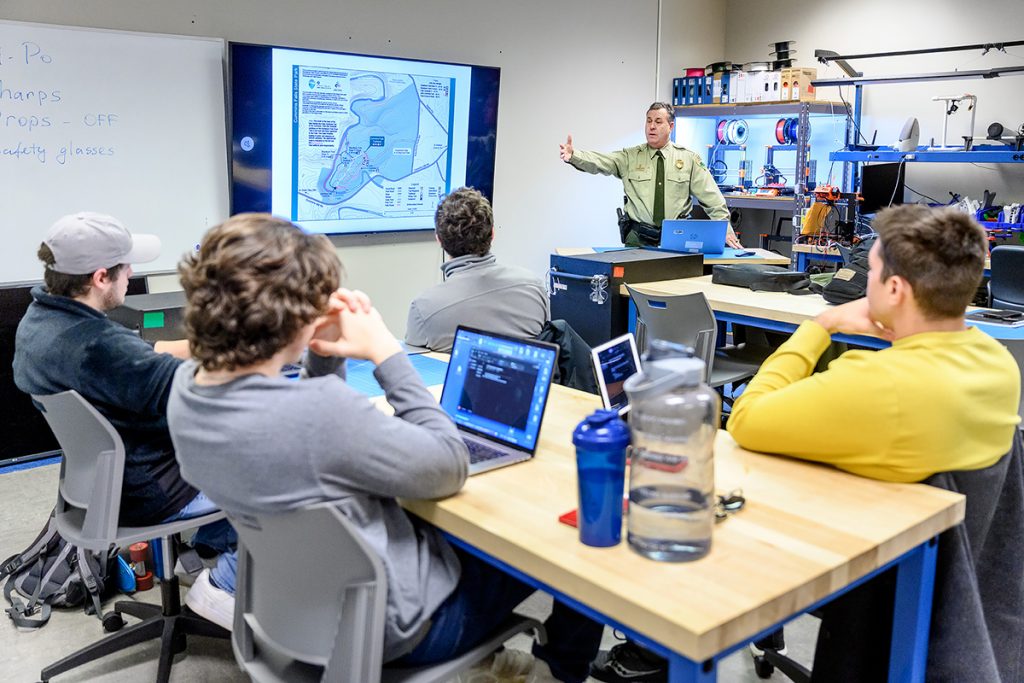 Shane Petty, chief ranger for Tennessee State Parks since 1997, talks to professor Kevin Corns’ unmanned aircraft students in the BAS UAS lab about their involvement in a potential mission for a presumed missing person at Cummins Falls State Park earlier this year. The students traveled to the park in Jackson County near Cookeville, Tenn., April 1 to map conclusions in the case. (MTSU photo by J. Intintoli)

“It’s been an experience of going from beginning to end,” said Hickman, 43, a member of the student team. “He (Petty) started the conversation. We started getting the plan together. You need to make sure you have the right equipment. Then you get to the (physical) place of where you’re going to do the mapping. Now we’re here doing it.” 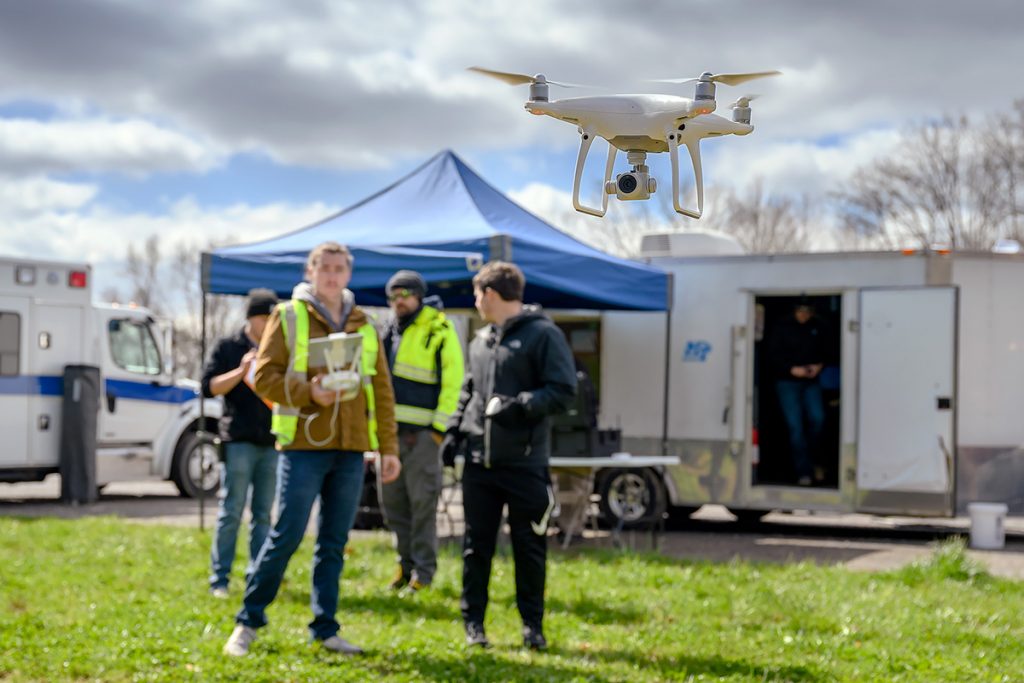 MTSU seniors Michael Clancy, left, of Franklin, Tenn., and Aiden Galdino of Brentwood, Tenn., use unmanned aircraft systems technology to launch a drone in early April during a mapping mission at Cummins Falls State Park near Cookeville, Tenn. They were part of six students collecting data and flying drones at this and other missions during the spring semester. (MTSU photo by J. Intintoli)

The students planned ahead on campus and other missions After driving 90 minutes to reach the park, they set up their equipment — including technology in the mobile command station — and readied the drones in the main parking area near trails and visitor’s center. Each student flew a drone during the mission. Whittle and others began a charting process.

“Since this is a multi-part mission, we want to make sure everything is concise across the board,” Whittle, 23, said. “We’ll plot and chart each flight altitude, how we’re capturing the data, the distance (and) the speed we’re capturing the data, and the reason we capture the takeoff battery (charging level) and the weather is because those things are affected through each operation.

“These are things we can record, so in future operations, we can recall data that we have to make more accurate adjustments and deal with a better understanding of the equipment we need for the mission.” 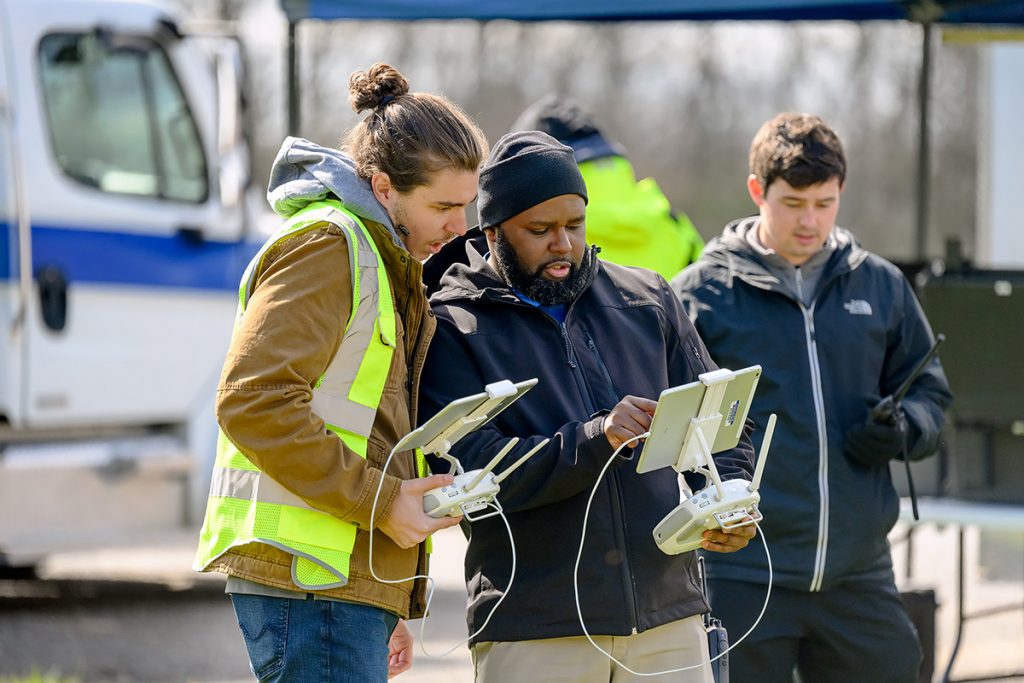 After the launch of a drone, MTSU students in an aerospace unmanned aircraft systems class study the data coming to their iPad April 1 at Cummins Falls State Park near Cookeville, Tenn. Michael Clancy, left, of Franklin, Tenn., Daryl Hickman of Murfreesboro and Aiden Galdino of Brentwood, Tenn., chart a section of the park, which saw a hiker from Ohio turn up missing in February 2021.His remains were discovered March 29.(MTSU photo by J. Intintoli)

Hickman and Harris shifted gears, away from the others, and moved to a spot about one mile away to gain a better vantagepoint for their mapping.

“We found that when we moved closer to the area we were mapping, we could keep the signal,” Hickman said. “The drones were supposed to be flying a mile or so away in perfect conditions — nothing’s around, no Wi-Fi, no cell phone towers, nothing like that. … So, we moved down the road, closer to the area.”

Hickman, who is a TV and film production major in the College of Media and Entertainment, is pursuing a minor in the UAS concentration. He is a veteran, having served 22 years in the U.S. Navy, retiring as a chief petty officer/operations specialist.

Ready to hit the world running

This capstone course is their final one in UAS, to show they “can operate safely in the national air space system,” Corns said. He believes the students are prepared for careers after MTSU.

“This (field mission) is the application,” he said. “They’ve gained the basic skills and knowledge. We’re not going to make them an expert in any one system that’s out there. We’re going to expose them to a lot of different systems. Our goal is to, when they go work for somebody else, is they have the skills to be successful.”

During the semester, Corns’ connections landed them training missions at a quarry in Shelbyville, Tennessee; at a bamboo farm in Almaville, Tennessee; mapping at The Webb School in Bell Buckle, Tennessee; the state park quest; and a number of campus projects.

“There’s a lot of coordination they have to go through, to make sure all the team members are on board, that we have permissions (to fly drones in air space),” Corns said. “… They’ve gotten to experience a lot of different things, that when they go out and work in the industry, they’ll be able to put to good use.” 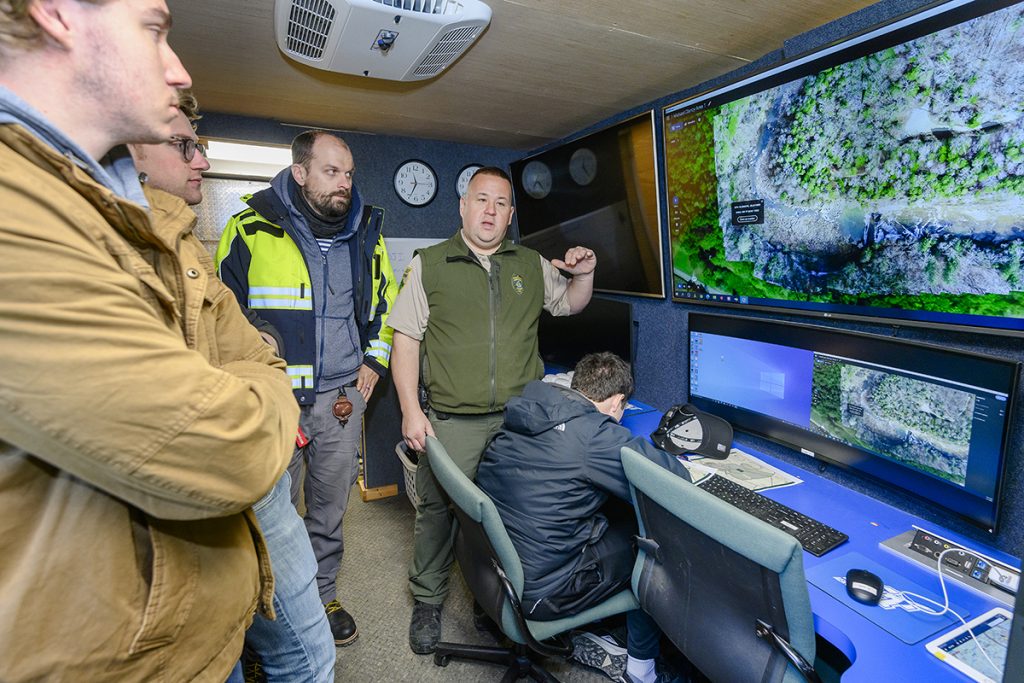 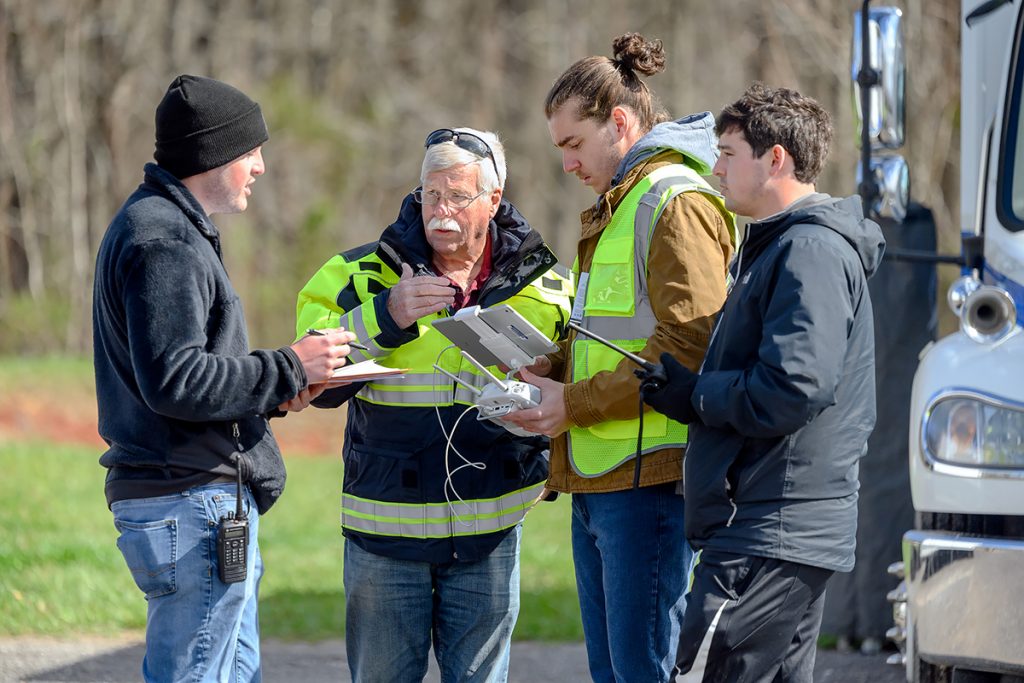