In the News: The Olympic Games.. 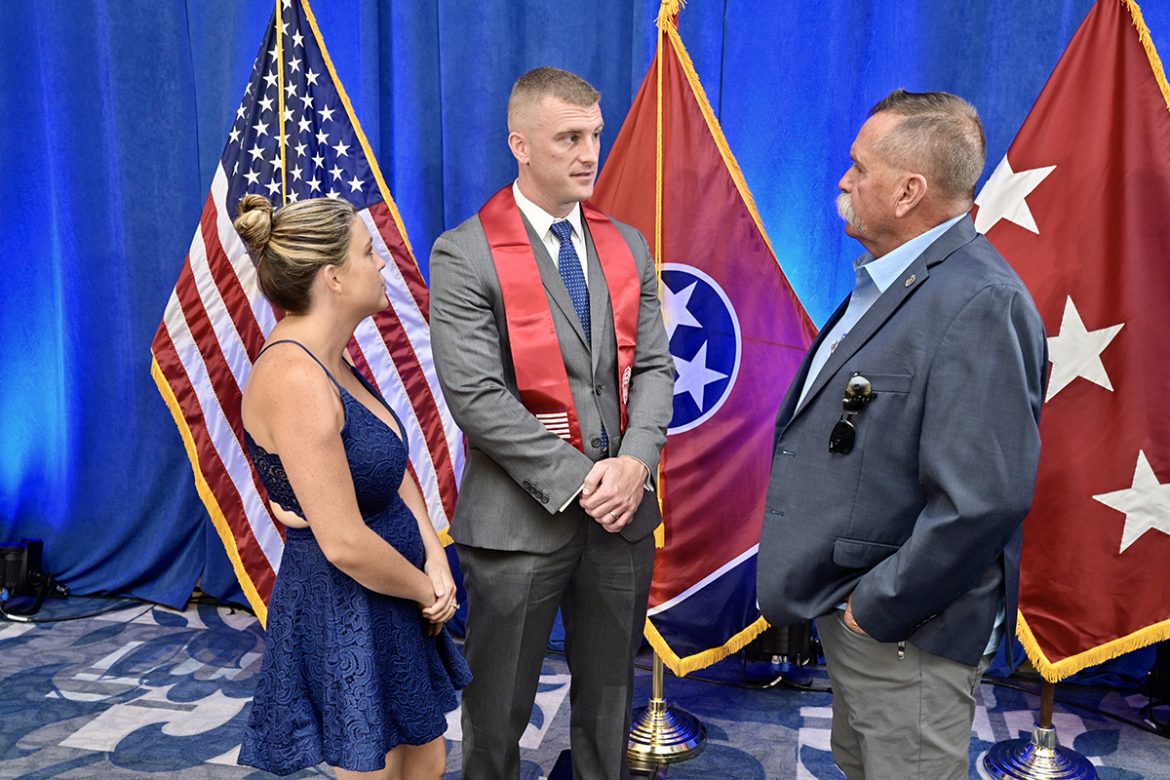 As a U.S. Marine, Corbitt Huseth found himself in harm’s way far too often, being shot at — even being struck on the arm and watching others be wounded or die from enemy fire.

As a college student at Middle Tennessee State University trying to support a wife and young family, Huseth has earned three degrees — bachelor’s and master’s in exercise science and doctorate he’ll receive soon in human performance.

Huseth, a Mt. Juliet, Tennessee, resident and Memphis, Tennessee, native and 40 student veterans will be graduating at 9 a.m. Saturday, Aug. 7, in the summer commencement ceremony in Murphy Center. He was one of several students recognized Wednesday, July 28, during the MTSU Graduating Veterans Stole Ceremony in the Ingram Building’s MT Center. 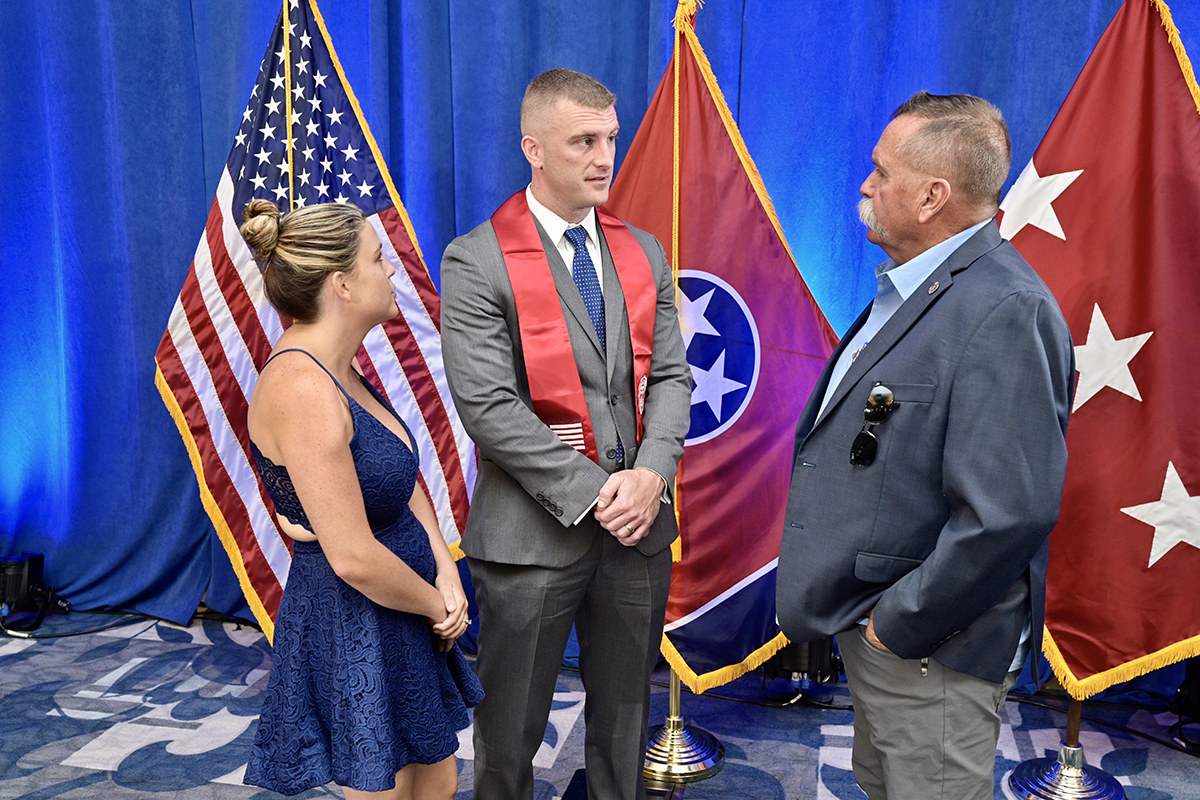 Brienanna, left, and Corbitt Huseth visit with David Corlew of The Journey Home Project following the Graduating Veterans Stole Ceremony Wednesday, July 28, in the Ingram Building’s MT Center on the MTSU campus. Corbitt Huseth, who will earn his doctorate in human performance, will be the first graduating student veteran to receive a third stole for earning his third degree. Brie Huseth will be pursuing a master’s degree in education at MTSU starting this fall. (MTSU photo by Andy Heidt)

Huseth, 32, becomes the first graduating veteran to receive three red stoles from the university since the Charlie and Hazel Daniels Veterans and Military Family Center instituted the special ceremonies in May 2015. This one marked the 20thStole Ceremony and was broadcast on True Blue TV and the Daniels Center Facebook page.

“This closes one chapter, but opens another,” said Huseth, who plans to pursue a second master’s degree and whose wife, Brieanna, will seek a master’s in education from MTSU.

“Completing my doctorate (first in his family) is a great accomplishment that I am both surprised and satisfied with,” he said. “I nearly failed out of high school several times. But nothing compares to my time in the Marines and being a sergeant. I know a lot of Marines that have what it takes to get their Ph.D. I don’t know many doctors that have what it takes to go to combat as a Marine.”

Huseth works as a veteran service representative for the Department of Veterans Affairs Nashville Regional Office.

“Ultimately, I want to help veterans,” he said. “The best way to do that is to progress through the VA as far as I can so that I may be able to start making needed changes for the betterment of veterans suffering from mental health conditions.” Huseth obtained his doctorate to obtain credentials “necessary to go as far as I need in the VA.” 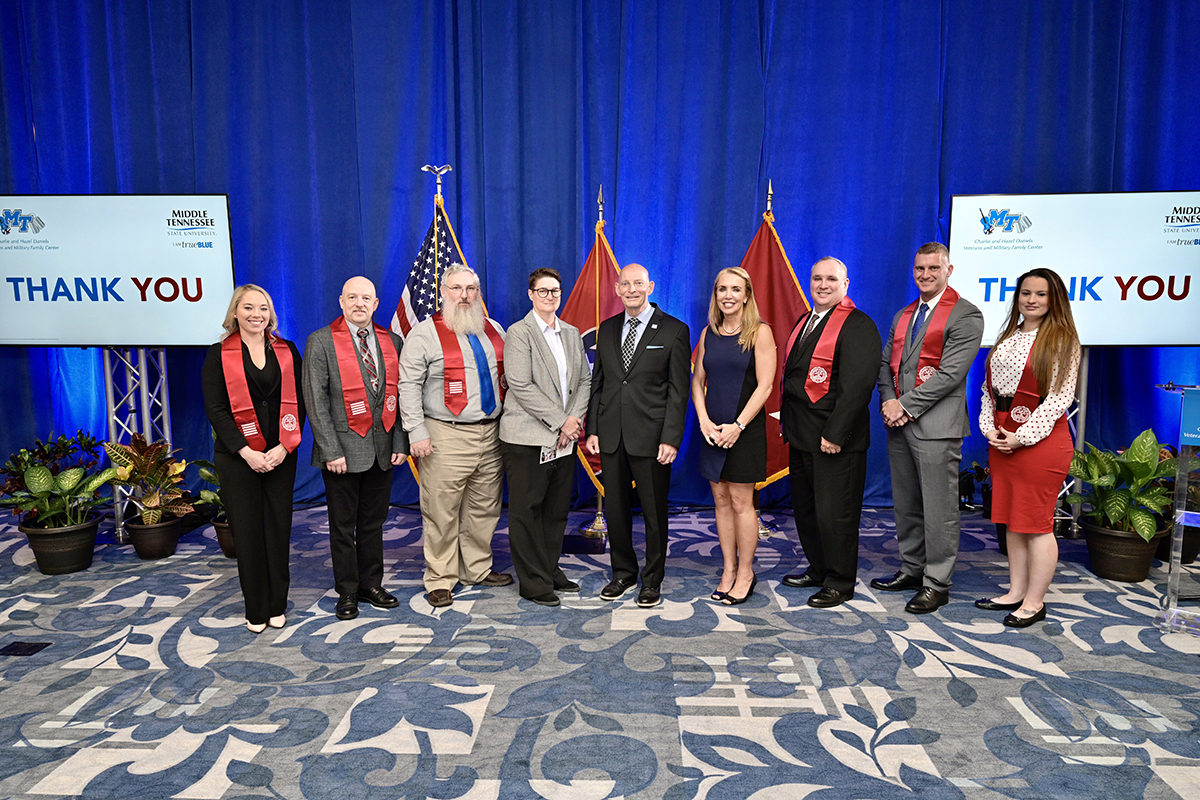 “Think about the people who have helped you,” said Anderson, who spent 4½ years in active duty with the Army Corps of Engineers (leaving with a rank of first lieutenant) and 10 years in active reserves (rank of captain). “Thank them, stay in touch and, in their honor, pay it forward.

“Next, while you all experienced many hard things in your life, you will continue to be asked to do hard things. We rarely can do this successfully on our — learn to ask for help.

“Finally, regardless of what you think you know, you can always learn more. Here’s a challenge: Be lifelong learners and enhance your listening skills.”

Anderson earned her bachelor’s in mathematics and operations research, her MBA from Tulsa University and doctorate from the University of Arizona.

Keith M. Huber, senior adviser for veterans and leadership initiatives and a retired U.S. Army lieutenant general, gave them a task: “Focus on being thankful and being the best people we can be.

“If you knew today was your last day, reflect on that. Who would you go visit? … Work through the emotional inventory. Pay attention. There are all sorts of people who begin their day never expecting it to be their last day.”

Representing The Journey Home Project, David Corlew, longtime manager for the late Charlie Daniels, told the honorees to “always learn from everybody else. … It’s exciting for me and the foundation to see the growth as you continue your careers and better yourselves. We love being a part of that. (And) our work will not diminish. There’s more work to do.”

Daniels Center Director Hilary Miller shared with the student veterans about their new role as alumni. She also thanked the university “for allowing us to keep our doors open the entire time” (during COVID-19) and praised her staff for their hard work. 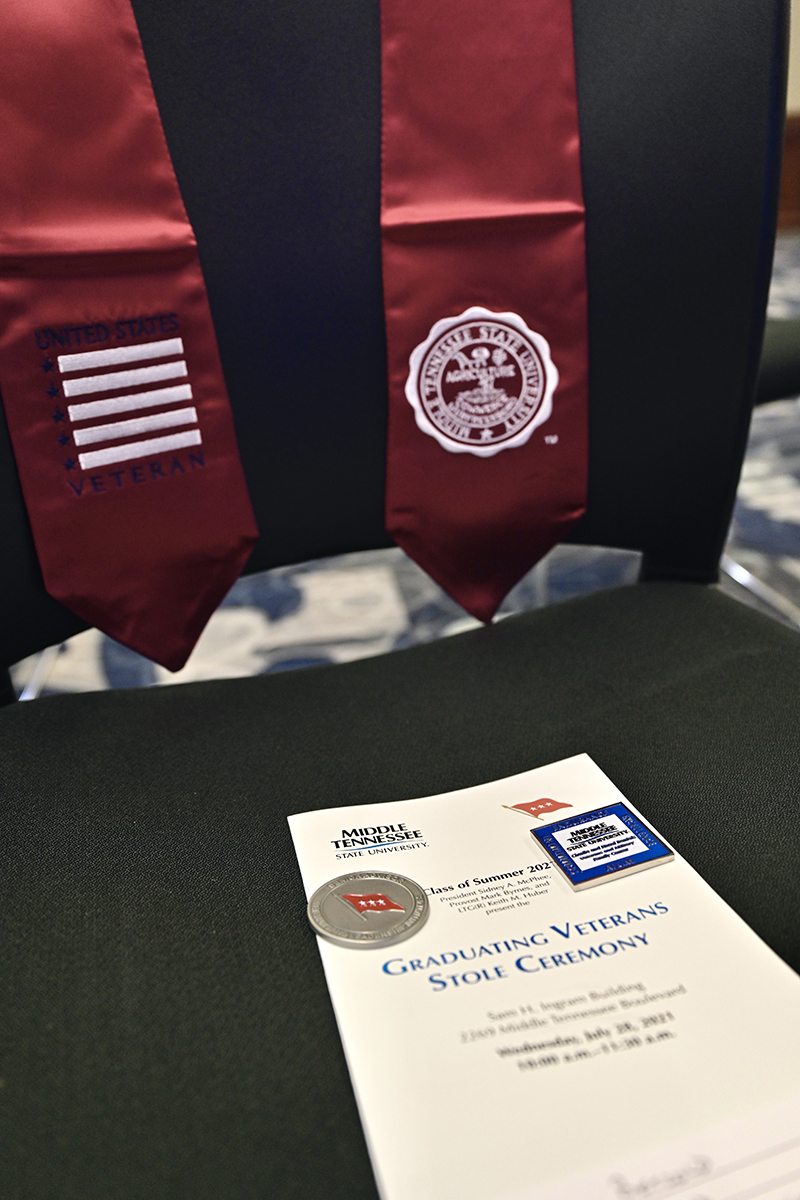 A red stole to wear at graduation and a special coin and pin are shown with the program for the MTSU Daniels Center Graduating Veterans Stole Ceremony Wednesday, July 28, in the Ingram Building. The honorees will graduate Saturday, Aug. 7, in Murphy Center. (MTSU photo by Andy Heidt)