To make the magic of the Grammy Awards last long beyond the ceremony, MTSU‘s James E. Walker Library has an exhibit to please any music lover.

“A Legacy of Excellence: MTSU at the Grammys” is on display through the month of February on the first floor of the library near the technology services desk. Two display cases full of memorabilia, including Grammy Awards, are available to see.

Posters, statuettes, large photos and other items make the connection between the Recording Academy, formerly the National Academy of Recording Arts and Sciences, and MTSU faculty and former students who have been acknowledged for their artistic and technical expertise as professionals. 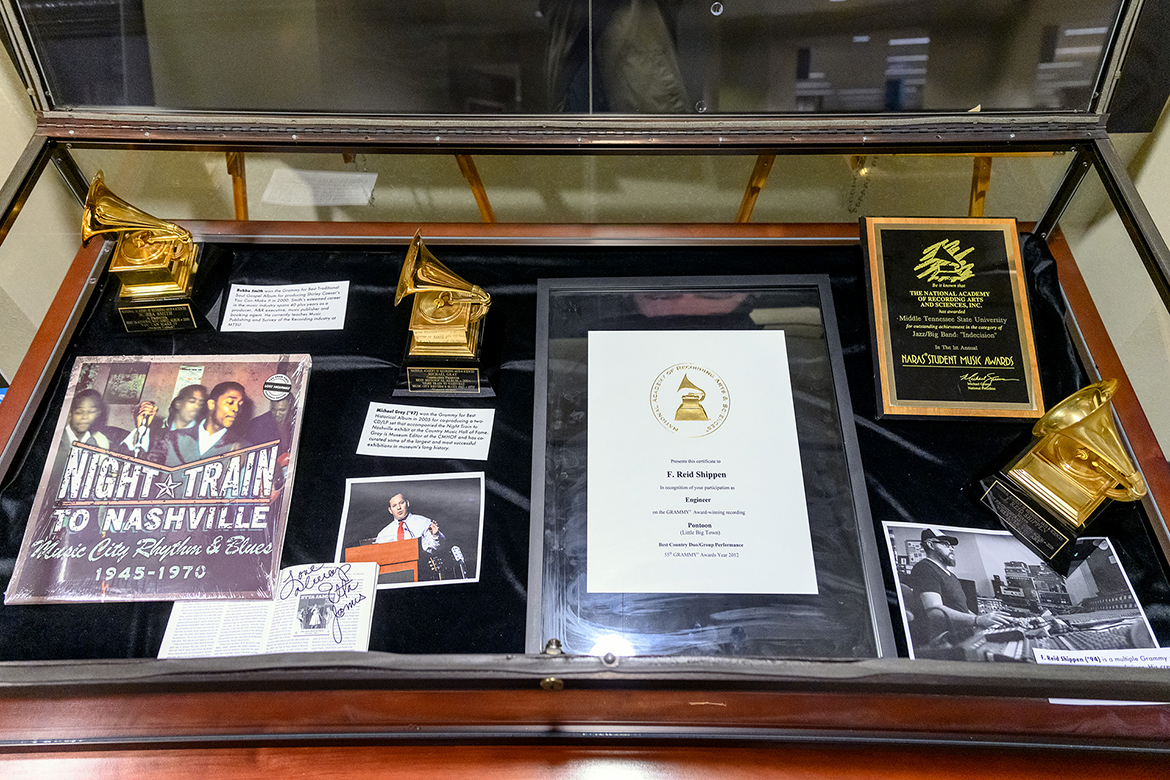 Some of the Grammy recognition for MTSU alumni is shown inside a display case in “A Legacy of Excellence: MTSU at the Grammys,” an exhibit at the university’s James E. Walker Library on view through the end of February. The items include, clockwise from top left, a Grammy won by MTSU recording industry lecturer and Master of Arts in Liberal Arts alumnus Roy E. “Bubba” Smith, producer of the 2000 best traditional soul album, “You Can Make It” by Shirley Caesar; the Grammy that alumnus Michael Gray (B.S. ’92, M.S. ’97) received as co-producer of the 2005 best historical album, “Night Train to Nashville: Music City Rhythm & Blues, 1945–1970”; a certificate of recognition for 1994 alumnus F. Reid Shippen, who engineered the 2012 best country duo/group performance Grammy winner, “Pontoon,” by Little Big Town; a plaque from the Recording Academy, then the National Academy of Recording Arts and Sciences, recognizing MTSU in the inaugural NARAS Student Music Awards for outstanding achievement in the jazz/big band category; Shippen’s Grammy for engineering the 2007 best pop/contemporary gospel album, “Wherever You Are” by Third Day, and a photo of him in the studio; and a photo of Gray alongside a copy of the “Night Train to Nashville” album and its liner notes autographed by music legend Etta James. (MTSU photo by J. Intintoli)

Among the artists and technicians celebrated in the exhibit are two multi-Grammy winners: former MTSU student Hillary Scott of the country trio Lady Antebellum, who created a scholarship in 2015 for young women interested in the industry, and songwriter/producer Luke Laird, a 2001 graduate who was part of a January 2019 report by NBC Nightly News weekend anchor Kate Snow on the Department of Recording Industry‘s Grammy recognition and outreach.

“A Legacy of Excellence: MTSU at the Grammys” is a collaboration between the James E. Walker Library, the College of Media and Entertainment and the Department of Recording Industry.

The exhibit is free and open to the public. 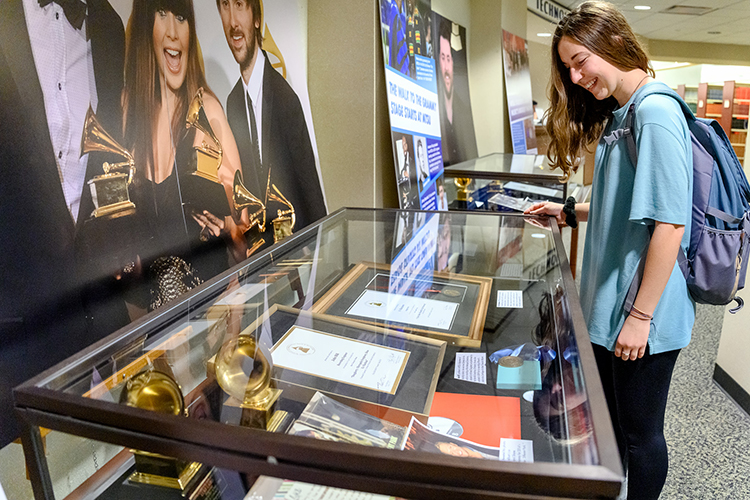 MTSU freshman global studies major Maggie Dennis of Christiana, Tenn., learns more about the MTSU students, alumni and faculty connections to the Grammy Awards while inspecting a display case in an exhibit at the university’s James E. Walker Library, “A Legacy of Excellence: MTSU at the Grammys.” The exhibit is on display through February. (MTSU photo by J. Intintoli) 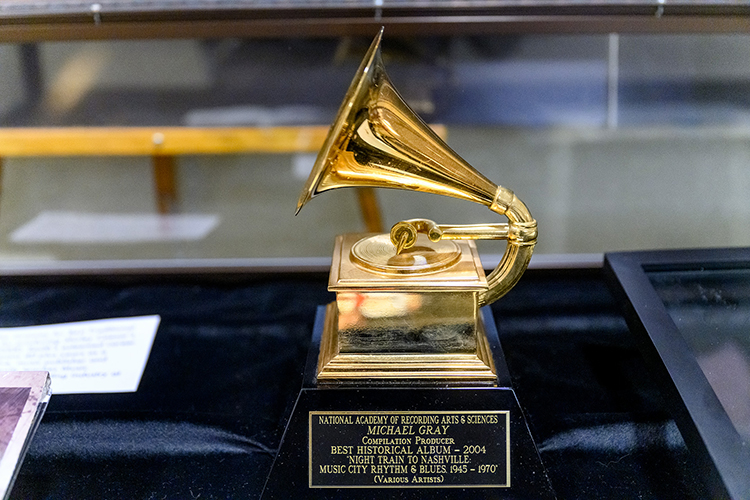 MTSU alumnus Michael Gray’s (B.S. ’92, M.S. ’97) Best Historical Album Grammy, received in 2005 for co-producing “Night Train to Nashville: Music City Rhythm & Blues, 1945–1970,” is included in “A Legacy of Excellence: MTSU at the Grammys,” an exhibit on display at the university’s James E. Walker Library through the end of February. (MTSU photo by J. Intintoli) 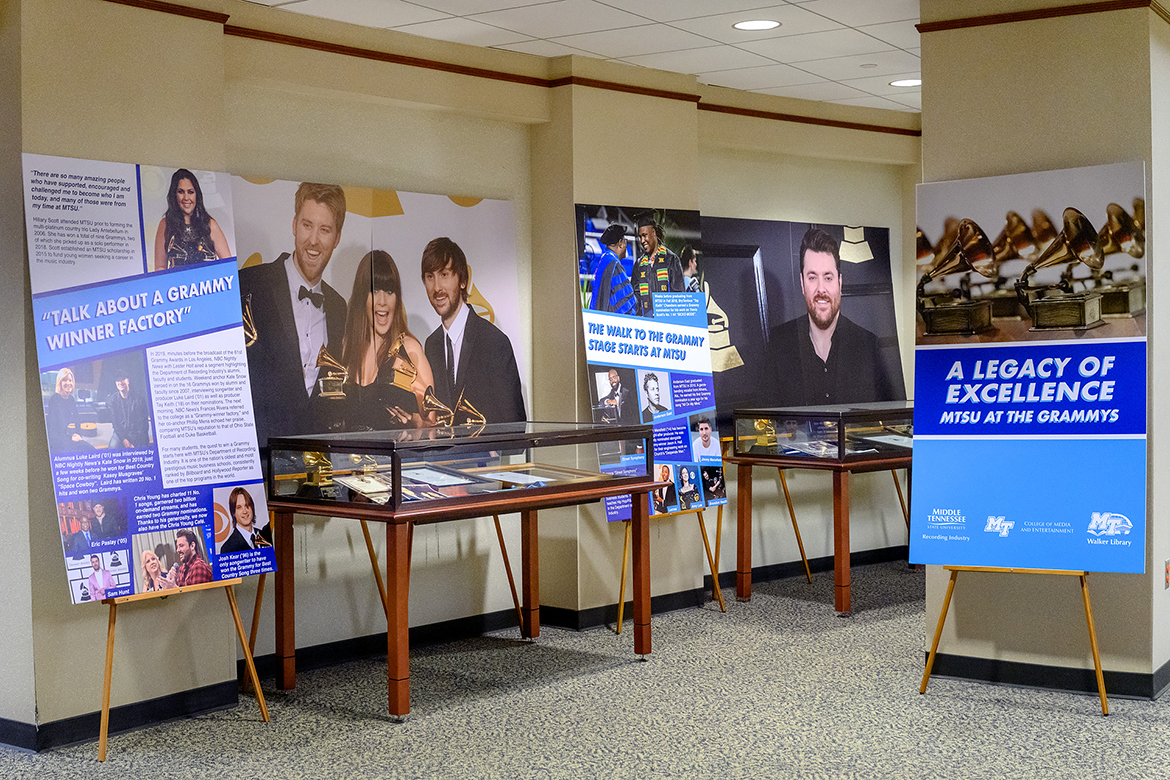