‘MTSU On the Record’ shines sp.. 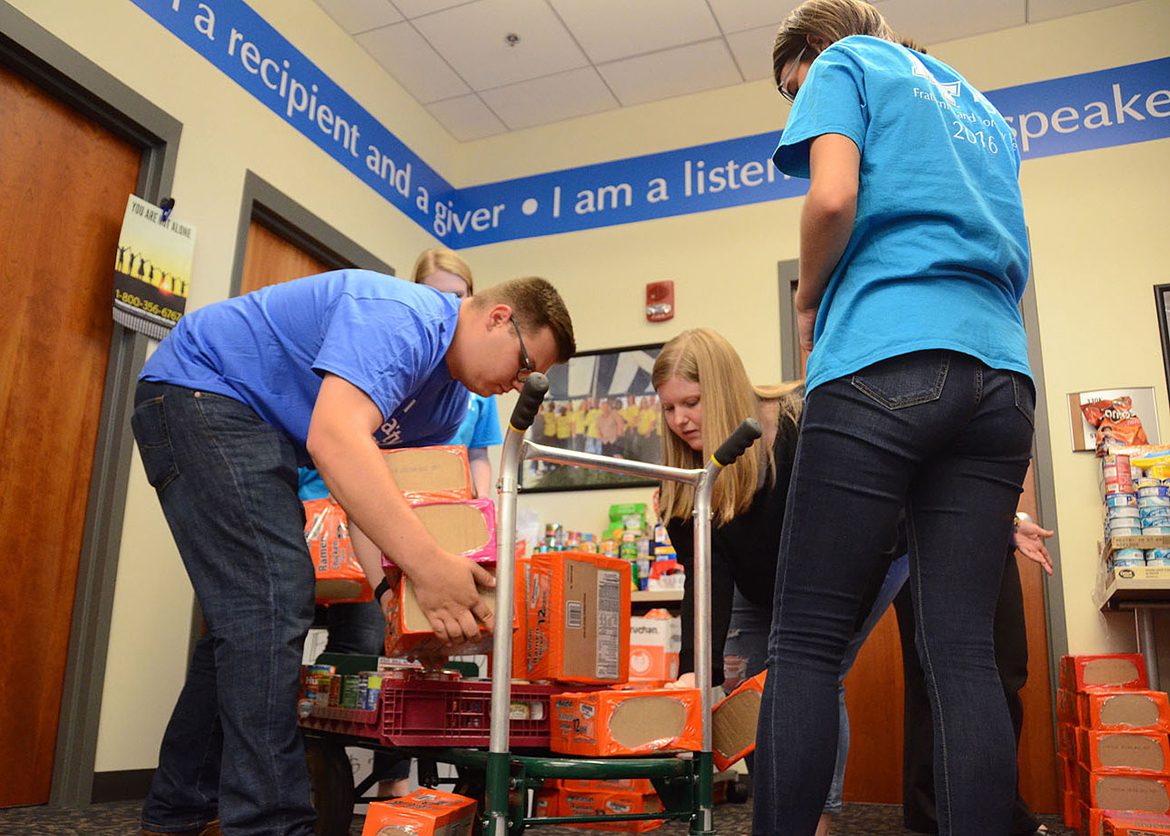 The beneficiary was MTSU’s Student Food Pantry. Located on the second floor of MT One Stop, the pantry offers canned food and other nonperishable items to help students in a pinch throughout the semester.

Members of MTSU’s Fraternity and Sorority Life pack up donations stored inside the Student Union that were collected during a recent food drive in support of the Student Food Pantry. Pictured, from left to right, are Jake West, Greek Week committee member, Taylor Hutson, Panhellenic vice president of recruitment, and Shalayna Hoekstra, Greek Week chair. (MTSU photo by Jimmy Hart)

Shalayna Hoekstra, Greek Week chair, said that FSL usually partners with Habitat for Humanity for their philanthropic project, but since there were no immediate Habitat builds, they discovered that MTSU Student Food Pantry could use some help.

Hoekstra is proud of the large amount of participation from among the FSL’s 24 campus organizations.

“I’m really humbled that we put in so much work and that our community really proved to people that — I think Fraternity and Sorority Life doesn’t always have a great reputation, so when we can provide philanthropic services to the students of our community it’s really great,” she said.

During Greek Week, April 17-20, FSL hosted events such as a luau and a cookout that required the entrance fee of one canned food item for those who attended.

Kristen Russell serves as coordinator of outreach and support programs at MT One Stop and oversees the operations of the Student Food Pantry. First opened in fall 2012, the pantry is available to currently enrolled students, who must bring their student ID to access the pantry.

Russell said inventory has been running a bit low, so she reached out to FSL Director Leslie Merritt about ways Greek members could help.

“To have a donation this large come in will really help keep us up and running right now,” Russell said. “I think sometimes people forget that students are here over the summer and so we do need donations even during the summer.”

As part of their philanthropic work that promotes the idea of giving back, Merritt believed that focusing on the True Blue community would be beneficial.

“When Greek Week came around, we really wanted to look at our own community, the MTSU student population and do something to give back to them,” she said.

This is FSL’s first time doing a food drive for the pantry, and representatives believed that a little competition between the organizations wouldn’t hurt.

FSL organizations were encouraged to bring in items as part of the Greek Week championship. In return, for each item turned in, the group responsible would be given a point.

The overall winner of the competition was the Phi Delta Theta fraternity.