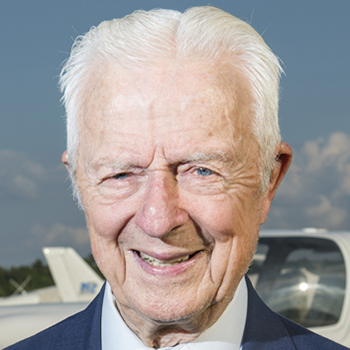 A sharecropper’s son who flew into the pages of history was the guest on a recent edition of the “MTSU On the Record” radio program.

Retired U.S. Air Force Col. William “Greg” Gregory, an MTSU alumnus, pauses for a photo near the university’s airplane fleet at Murfreesboro Airport in this 2013 file photo. Gregory was the guest on the March 23, 2015, edition of the “MTSU On the Record” radio program. (MTSU file photo by Andy Heidt)

The aviation ace will speak about his extraordinary career at 5:30 p.m. Thursday, April 2, in Room 204 of the Todd Building on campus. The event is free and open to the public.

Gregory, who flew his first airplane as an MTSU student in 1940, went on to fly missions over North Africa and Europe in the U.S. Army Air Corps during World War II.

After the creation of the U.S. Air Force, Gregory commanded a squadron of U-2 pilots who flew reconnaissance missions over Cuba during the Cuban Missile Crisis in 1962.

The photographs these pilots took confirmed the presence of Soviet-made nuclear missiles in Cuba, only 90 miles from the American continent. The pictures and information they obtained helped inform the decisions made by President John F. Kennedy, his cabinet and the Joint Chiefs of Staff.

“It was really a tense time and hard to realize how close we came to going to war,” said Gregory. “Kennedy’s staff was about equally divided between the half that wanted to knock out the missiles immediately and the other half that wanted to reason with (Soviet Premier Nikita) Khrushchev.”

Though Gregory never graduated from MTSU because he joined the Army in his junior year, he has remained a solid supporter of the university, establishing a scholarship to MTSU for students from either Trousdale or Macon counties.