‘MTSU On the Record’ learns ho.. 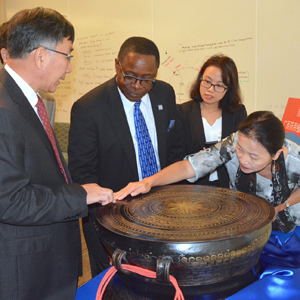 MTSU returned a favor to the Guangxi Botanical Garden of Medicinal Plants Sept. 28, affixing a plaque at a special laboratory on campus that recognizes their partnership in the study of ancient Chinese herbal remedies.

MTSU President Sidney A. McPhee and Miao Jianhua, director of the southern China garden, added the label of “USA-China Joint Research Center” outside the Tennessee Center for Botanical Medicine Research in the new $147 million Science Building.

Miao and McPhee dedicated a similar sign outside the Guangxi laboratory two years ago.

MTSU and the medicinal herb garden, named in 2011 as the world’s largest, are partners in an exclusive collaborative agreement to accelerate the development of Western medicines from plant extracts.

“It is fitting and proper that we host our friends from Guangxi today and we celebrate the continuation of our partnership,” McPhee said.

“We are honored to have them on our campus and repay the hospitality they have shown us in our visits to China.”

The partnership, which began in 2011, plays to the strengths of both institutions. Garden researchers cultivate and prepare extracts. MTSU scientists, led by professor Elliot Altman, then screen the samples to determine their medicinal promise.

Miao, vice president of the Guangxi Academic Science Institute, surprised McPhee by bearing two gifts for the university: a 5,000-year-old bronze drum for MTSU’s Center for Chinese Music and Culture, set to open next year, and more plant samples from the Guangxi garden for researchers.

Miao and his delegation will spend the next several days in Tennessee, collaborating with their MTSU partners and touring facilities and attractions in the state.