It was almost like opening presents on Christmas morning.

There was no tree yet in the recreation room at Building 17, a residential rehab treatment program facility at the Alvin C. York Veterans’ Administration Medical Center in Murfreesboro. And these weren’t children, but grown men and women — patients and caregivers — whose eyes sparkled at the thought of what was about to happen. 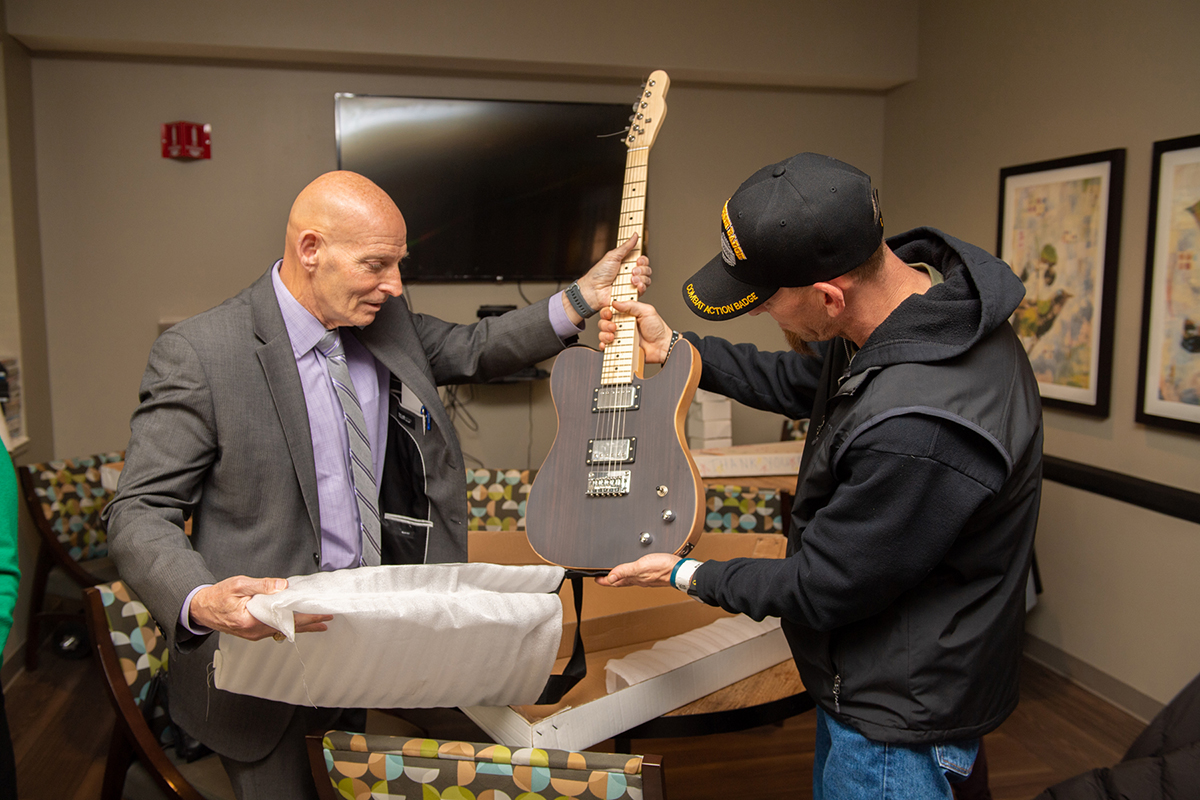 Patient Levi Troxell led the way as he moved to assist MTSU’s Keith M. Huber in opening a box with a new guitar.

Troxell has played guitar for 32 years. He said he learned from his father, the late Bill Troxell, who played music with the likes of Buddy Guy, Carvin Jones and Ten Years After, a British pop group popular in the 1960s and early ’70s.

“This is amazing,” said Troxell, adding that the guitars will help patients with post-traumatic stress disorder and sobriety issues.

“Even if they come and listen to people play, the interaction will be soothing or therapeutic. These are high-quality instruments.”

Troxell played “an old Bo Diddley practice riff and messed around with a Jimi Hendrix tune” as he got started, making use of one of four portable amplifiers that were part of the guitar gifts. 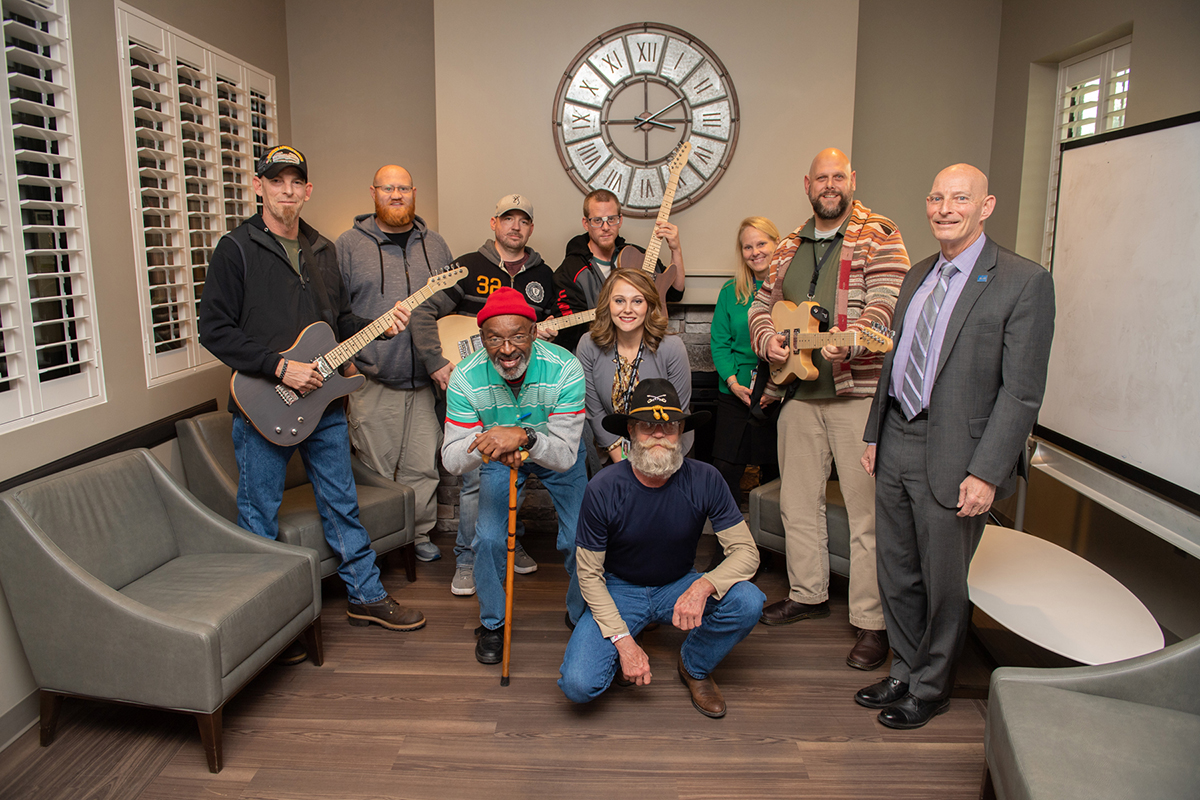 In appreciation of Huber’s visit, the company, a strong supporter of veterans in its workforce, agreed to give the instruments to Huber and the veterans center. Huber and Dr. Hilary Miller, Daniels Center director, then decided to give the guitars to the Murfreesboro VA.

“We know music heals,” said Vedral-Baron, who oversees Nashville and Murfreesboro VA operations and 11 Midstate VA clinics. “This is going to help so many more veterans heal.”

As Huber and Troxell began opening the boxes, responses of “how pretty” and “beautiful” emerged from the small gathering assembled for the presentation. 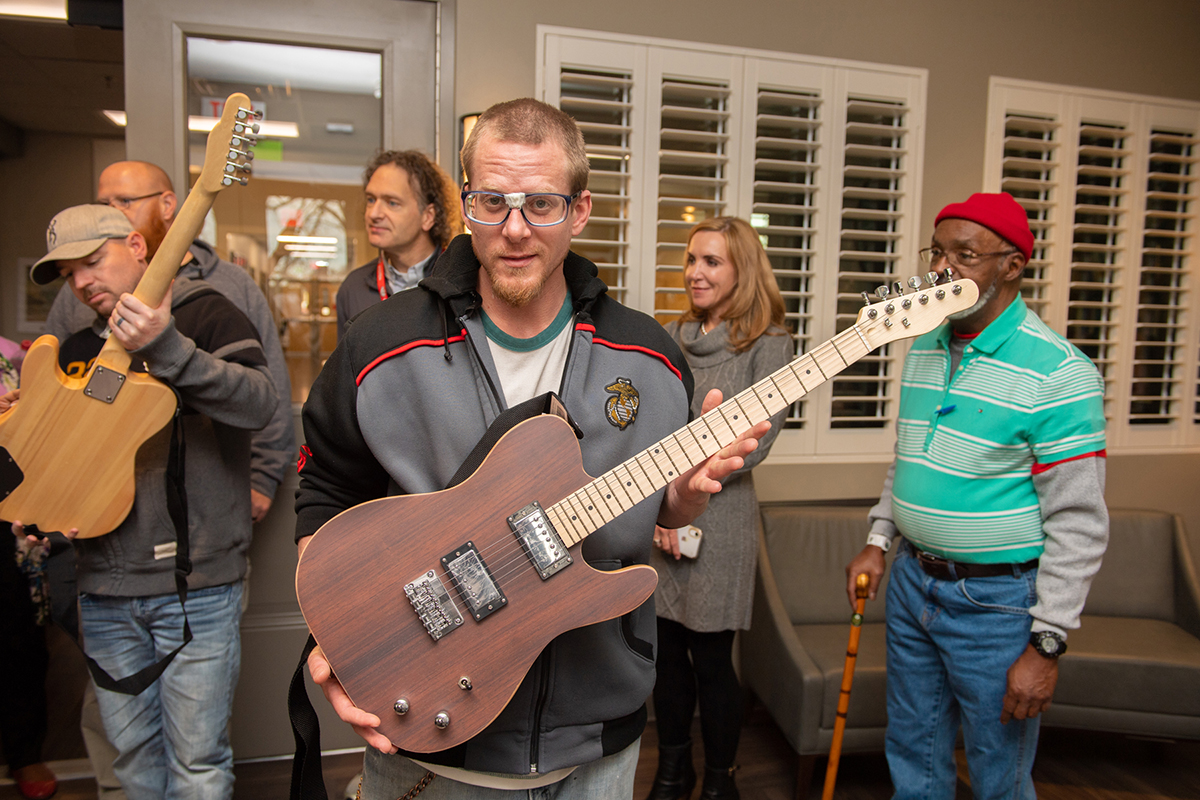 Huber said the gift is a continuation of “the incredible collaboration we have with the VA.” He added that Schneider, whose Nashville hub is located in Franklin, Tennessee, with a separate manufacturing facility in Smyrna, Tennessee, maintains an environment “where leadership matters.”

“These guitars can now touch hundreds of veterans,” Huber said. “That’s the magic of music.”

Karen Mallard, Schneider Electric human resources manager, said her company “is incredibly humbled by the opportunity to work with the community. … Sometimes small things make a big difference. … It’s humbling to see something we did as a fun activity have a larger impact. We hope these (guitars) are enjoyed by the veterans for many years.”

Mallard said employee teams also competed to decorate the boxes delivering the musical gifts. “Each team was able to express their artistic abilities,” she said.

Schneider Electric is a global leader of digital transformation in energy management and automation with operations in more than 100 countries.

The Daniels Veterans Center staff includes two fully funded VA employees to assist MTSU’s 1,000-plus student veterans and families with benefits-related questions and issues. The center is located in Room 124 of the Keathley University Center. 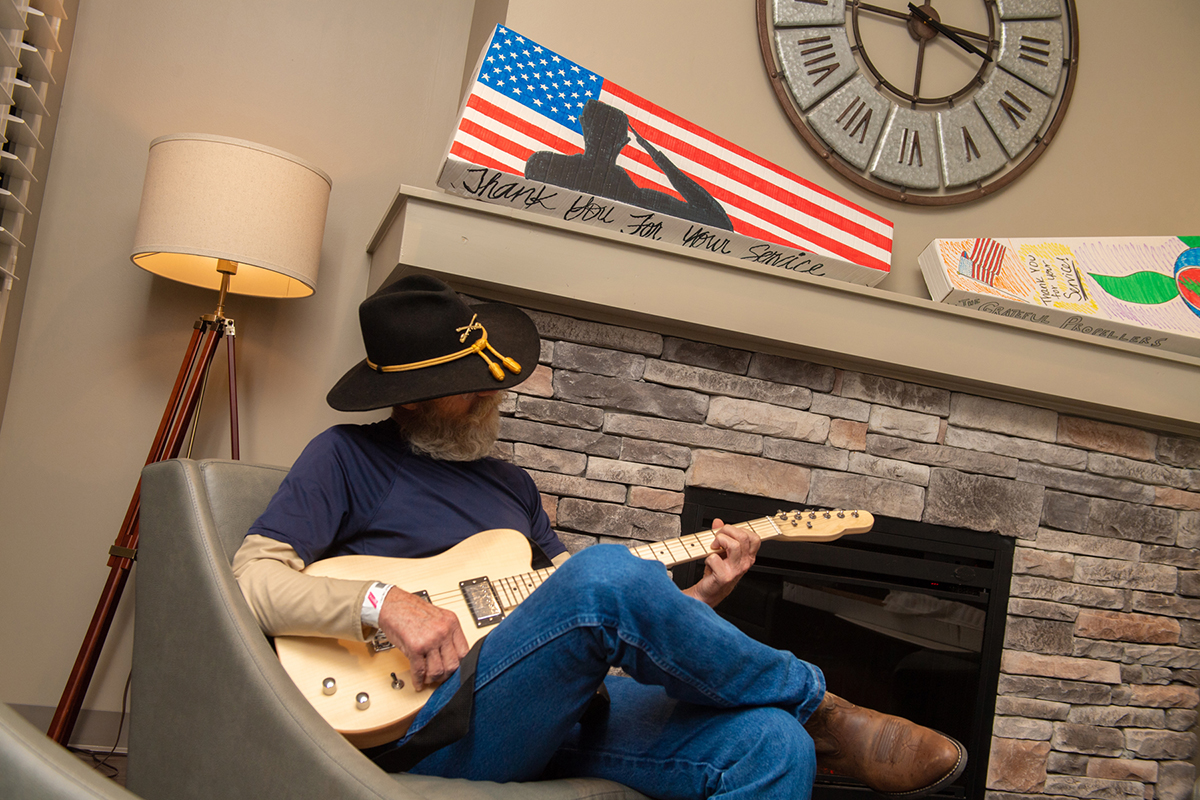 U.S. veteran Phillip Rich sits near the fireplace in the recreation room at the Alvin C. York Veterans’ Administration Medical Center to play one of four guitars presented by MTSU and Schneider Electric for music therapy at the veterans facility. On the mantel are two of the military-themed, hand-painted boxes for two of the four guitars. (MTSU photo by James Cessna)