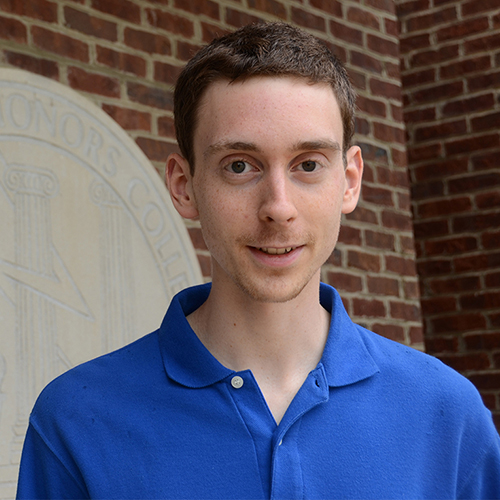 MTSU spring 2013 graduate Eric Guyes visited Israel in 2012 as part of a 10-day Jewish Birthright trip. He was certain he wanted to return.

Guyes will get his wish … in a major way. He applied for, was offered and has accepted a Fulbright Scholar award. He will study and perform research at Technion Israel Institute of Technology in Kesalsaba for 10 months starting in October.

Eric Guyes, a spring 2013 MTSU graduate and native of Roanoke, Va., has accepted a Fulbright Scholar Award from Israel. His 10-month study and research will begin in October. (MTSU photo by News and Media Relations)

The U.S. Department of State’s Bureau of Educational and Cultural Affairs funds the Fulbright Program, one of the world’s most prestigious educational exchange programs.

Recipients are chosen on the basis of academic or professional achievement and demonstrated leadership potential. The Fulbright U.S. Scholar Program sends American scholars, professionals and artists abroad to lecture and/or conduct research for up to a year.

“I am very excited to go and very grateful the (Israel Fulbright) committee selected me,” said Guyes, who was a physics major and aerospace researcher in the College of Basic and Applied Sciences.

“It’s a huge honor. I know what’s expected of me. I’m looking forward to working with the researchers in Israel and the Fulbright committee, and make it beneficial not only for me but for the Fulbright itself.”

Honors College Dean John Vile said that Guyes “actually had the choice of two major fellowships — what’s called a DAAD award, a 10-month award to study in Germany, as well as a Fulbright to study in Israel. Although he went with the one in Israel, and the Fulbright is a great choice, either would’ve been a great choice.

“Both are a testament to the fact that national and international organizations are recognizing one of our students as among the best.”

Guyes said there are two primary reasons he is excited about the Israel opportunity: He will get to perform aerospace engineering research and, being Jewish, he will get to “explore Israel as a Jewish person” and “explore my Jewish identity.”

“I have been studying Hebrew for the past year on the hope I’m accepted for this scholarship and, very luckily, I have been,” he said. “I’m very excited to be able to go over there and be a part of the scientific community and explore a thriving and flourishing Jewish community and culture.”

With his travel covered, the Fulbright grant will provide a stipend for his living expenses while in Israel, he said.

Guyes was featured in the MTSU Honors Magazine this spring. A licensed pilot, the Roanoke, Va., native used a $2,500 Undergraduate Research Experience and Creative Activity grant to develop a laboratory module designed to give aerospace technology students practical and theoretical understanding of the physics employed by jet engines.

This marks the fourth consecutive year MTSU has seen at least one student awarded a Fulbright opportunity. Guyes is the eighth student in the past four years to receive a Fulbright. You can learn more about him in the video below.