Make your spring a safer one w.. 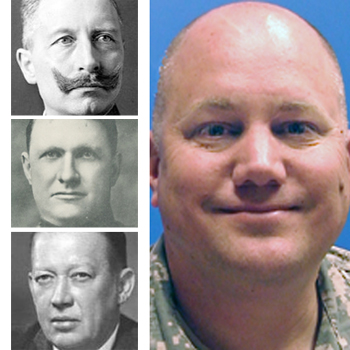 An MTSU doctoral student related the tale of several Tennessee youths’ attempt to kidnap Kaiser Wilhelm II after World War I on a recent “MTSU On the Record” radio program.

Host Gina Logue’s interview with Darrin Haas, command historian with the Tennessee Military Department, first aired Jan. 25 on WMOT-FM (89.5 and www.wmot.org ). You can listen to their conversation below.

Haas, who is writing his dissertation on Tennessee’s memorialization of World War I, was a rescue swimmer with the U.S. Navy for five years. He currently serves as a military police major in the Tennessee Army National Guard and includes tours in Iraq and Kosovo on his service record.

One of Haas’ anecdotes is about the bungled 1919 attempt by Luke Lea, future publisher of The Nashville Tennessean, future American League president Larry MacPhail and other Tennessee soldiers to kidnap the German emperor from the Dutch castle where he was living in exile. They intended to drag the Kaiser to the Paris Peace Conference to face a possible war-crimes tribunal.

The young men concocted their plot during post-Armistice nights of drunken revelry in Europe. It went about as well as those kinds of plots do.

The Kaiser didn’t see it that way, however. He complained to Dutch authorities.

“Of course, the newspapers got ahold of it, and it just blew up into this kind of sensationalized story,” Hass said.