Hodge discovers new use for de.. 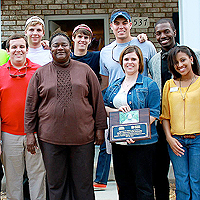 New homeowner Yvonne Summers, center, is joined by MTSU volunteers at the April 26 dedication ceremony for her house. Leadership and Service Director Jackie Victory, standing next to Ms. Summers, and MTSU sophomore Randall Thomas, far right, spoke at the event. (photo by MTSU Office of Leadership and Service)

It takes a neighborhood to build a house, so of course MTSU lent a hand to neighbors at the April 26 dedication of its third University-sponsored Habitat for Humanity home.

Staff and students joined Rutherford County Habitat volunteers to see the fruit of their labors—along with those of new homeowner Yvonne Summers—at the East Sevier Street site.

Summers’ new neighbors arrived from both sides of the street, or looked on from their porches, as children ran up into the straw-strewn yard and rode bicycles along the sidewalk. Even neighborhood police officers stopped by to say hello and check out Summers’ pretty frame house, complete with MTSU-blue mailbox at the curb.

“On Feb. 15, I came by to help out with the framing of the house, and today it’s going to be all filled up with furniture. It’s a home,” said MTSU sophomore Randall Thomas, an environmental engineering major and president of Sigma Alpha Psi, the University’s chapter of the National Society of Leadership and Success.

“It’s amazing, the power of love and volunteering we have at MTSU, to be able to help with something like this.”

MTSU junior Adam Banach frames one of the walls of the home being constructed during the Habitat Blitz Build. (MTSU photo by Andy Heidt)

“The partnership MTSU has with Rutherford County Habitat for Humanity is one of the best we have with any entity or organization,” said Dr. Danny Kelley, assistant vice president for student affairs at MTSU.

“We’re ecstatic to be able to participate in an event so life-altering for Ms. Summers and her family.”

Summers, a native of Danville, Ill., moved to Murfreesboro when her daughter came to town to attend MTSU. The former Danville Housing Authority employee decided to apply for the Habitat program after helping a fellow church member build her own Habitat house.

“This is wonderful,” said the soft-spoken Summers, almost overcome by emotion as she thanked volunteers, friends, family and neighbors for their support and hard work. “Thank you all so much.”

The house cost $60,000 to build, including $20,000 from members of the MTSU community. Other contributions came from supporters who wanted to help but were unable to physically participate in the build, organizers said.

“It’s been such a pleasure for us to work on this home,” said Jackie Victory, director of the Office Leadership and Service, which is part of MTSU’s Division of Student Affairs, Enrollment and Academic Services.

“We started with nothing but dirt, and now it is a home. Students, you know all the things you did to help here, but the most important thing you did is to give Ms. Summers a home. I know you’ll all wave at her on this porch every time you pass by.”