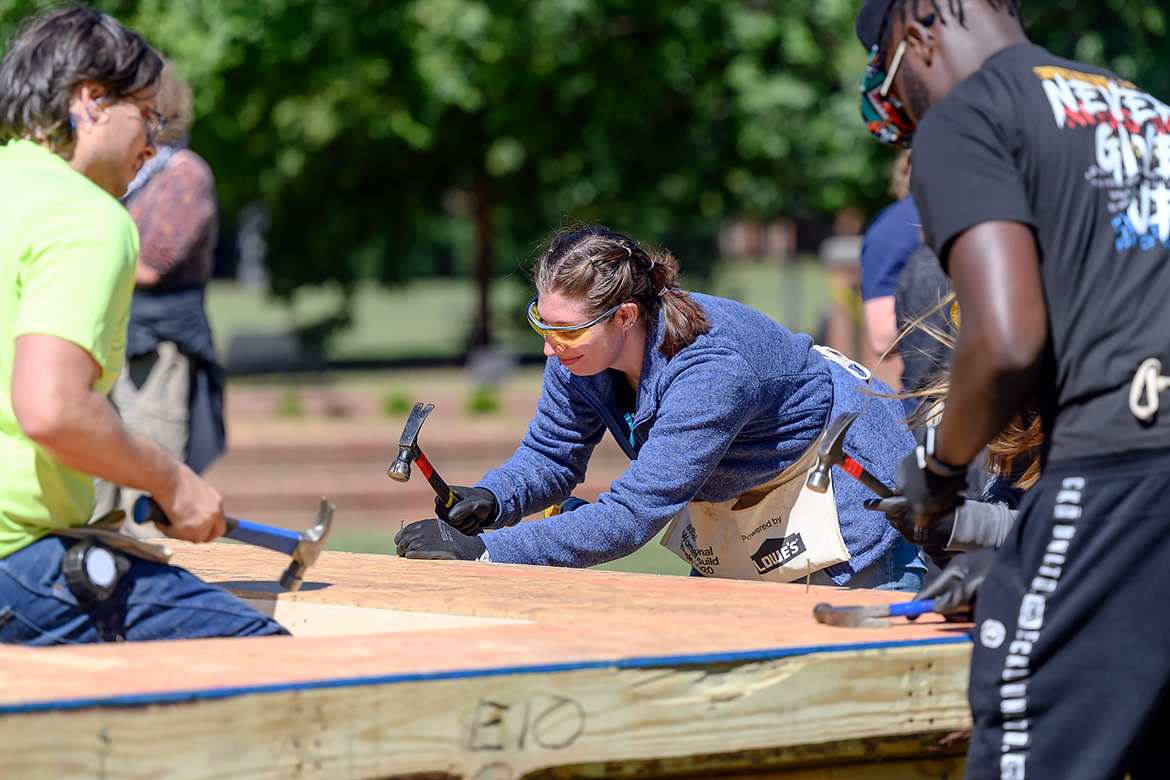 On a picture-perfect fall day on the Student Union Commons, Robinson, an MTSU alumna, and Alcocer joined volunteers — many with years of experience in hammering nails and other building skills and others with less expertise but eager to lend a hand — in getting the Habitat for Humanity project underway.

MTSU’s Office of Student Organizations and Service has a lengthy history with Habitat builds in an ongoing partnership with the Rutherford County Areay Habitat for Humanity.

Classes, fraternities and sororities and individual students regularly raise money and contribute time and energy to the community homebuilding effort.

Volunteers, including some from the MTSU panel build’s sponsor, Exit Realty/Bob Lamb, built several sections of the home at the site in a day’s time. The panels were later loaded onto a semitrailer and transported to Legacy Pointe, a 77-lot subdivision east of MTSU off Twin Oak Drive near Halls Hill Pike.

Organizers say the build will resume in early January, and Alcocer and Robinson expect to move in with their son, Miguel, by April 1.

“It’s a privilege, an honor and a blessing, to have the community come out and support Exit Realty, State Farm, the students at MTSU, as well as teachers who came out to support us and help us build the home of our dreams,” said Robinson, a 2018 graduate of MTSU who majored in Africana Studies and earned minors in political government and theatre.

With the sound of many hammers striking nails in the background, Alcocer said he and Robinson were “very grateful and thankful for everybody that’s out here pouring out their love.”

How their future began

Robinson is a Murfreesboro native who says she’s always been fascinated by people of other cultures. Native Californian Alcocer moved to Tennessee in 2019 to be near his son, Miguel.

Alcocer lived in a hotel where Robinson worked. They became friends, began to date, and married in 2020.

After marrying, the couple realized their apartment was too small for a family. Robinson’s mother suggested they approach Habitat for Humanity; they applied and were approved this year, becoming part of the next wave of 25 new local homeowners.

Robinson is starting her own nonprofit business, Immerge, aiming to help people from other cultures to fit into the American way of life. Alcocer is an inventory control lead at Nissan in Smyrna, Tennessee.

Iykemroy Nwaokike, 23, a senior biology major and Lagos, Nigeria, native who now lives in Murfreesboro, Tennessee, said he “came out here to have a good time and socialize with everybody. It’s been a great experience.”

Nwaokike and some of his Alpha Sigma Phi fraternity brothers assisted with the build.

“The student turnout has been great,” said Jackie Victory, director of student organizations and service. “We allow 15 to 20 students per hour to come out and help on the panel build.

“It’s been exciting to watch our students come out, not really knowing what they were getting into, to show up and realize, ‘Hey, I’m getting to work alongside the future homeowner. I’m getting to make a difference in their lives, so they are able to have a home.’”

Melissa Cross, the local Habitat’s director of development and marketing, said “doing a panel build like this allows MTSU students to get involved easily. They can come out for an hour or so and help build the house, as opposed to them having to go out the location and do an all-day build with us.”

Cross said 100 people usually volunteer for this type of Habitat building project, plus a construction crew and other construction volunteers.

She added that homeowners are required to invest a down payment of 300 to 400 “sweat equity” hours by helping with construction. They also must participate in 30 hours of financial literacy and homeowner education to sustain their zero to low interest mortgage payment.