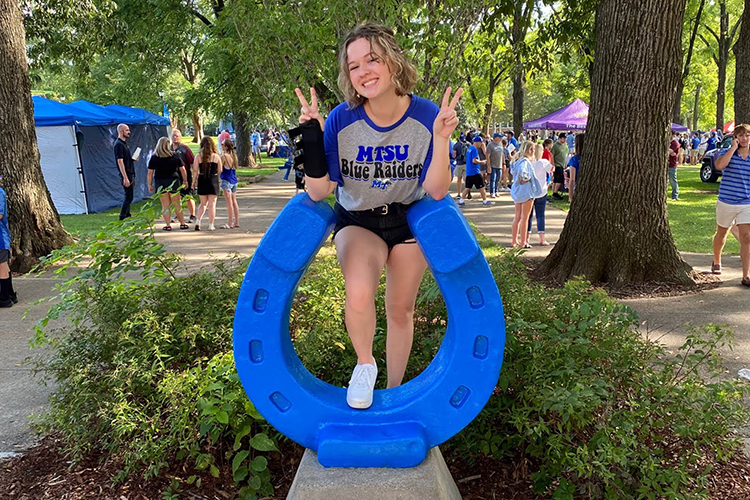 MTSU senior psychology major Haley Burt, a Murfreesboro, Tennessee, native, poses for a photo at the Blue Horseshoe in Walnut Grove in this undated photo. Burt, who’s minoring in criminal justice administration, is one semester away from graduating and already working her dream job at just 20 years old. She credits the university’s Dual Enrollment program with jump-starting her academic career. (Submitted photo)

An MTSU student is one semester away from graduating and already working her dream job at just 20 years old. She credits the university’s Dual Enrollment program for jump-starting her academic and professional life.

Psychology major Haley Burt, a Murfreesboro, Tennessee, native, started high school at 13 and college at just 15 years old. Of course, she was still in high school, but that was still an early start for your typical dual enrollment student.

“My mom had homeschooled me and I really wanted to be a part of this mock trial team,” she said. “I was only in eighth grade, but I convinced my mom to let me try and test into a higher grade and I did it.”

Burt said her mom made her a deal that if she made good grades she could stay in the higher grade, but if not, she would move back down to eighth grade. Burt excelled and has hardly looked back. She graduated high school just a couple of months after turning 17 and had already earned 24 credits through dual enrollment.

Burt’s first course was in 2017, an intro to music class. She said that she and her mom did not really know what dual enrollment was going to be like, so she was just going to “get her feet wet.”

“Immediately after that class I thought it was all kind of cool,” she said. “I actually ended up making friends, which I was really worried about.”

Her next class was a general psychology class, which just so happens to be her major now. Then, a criminal justice administration course, her minor now, and then she actually was brave enough to try a full college course load the first semester of her senior year of high school.

“I remember in my classes, which were on campus, on the first day they’d go through everyone and ask our name and our major,” Burt said, laughing. “So I’d always say, ‘Hey, my name is Haley and I don’t have a major because I don’t really go here but when I do it will be criminal justice.’”

She says it sort of threw everyone for a loop, but she was never treated any differently by any of the students or professors. She remembers thinking she looked like a 12-year-old walking around a campus full of 20-somethings.”

“It was daunting at first, but then my second semester I said, ‘You know what? I am killing it,’” she said. “I was walking around campus like I knew what I was doing.”

She sparked a mentorship with two of her dual enrollment professors from those psychology and criminal justice courses, having known from the time she was 8 years old that she wanted to work in criminal justice.

She set up a meeting with her psychology professor, Seth Marshall, and told him she wanted to be a criminal profiler but was not interested in becoming a police officer.

“He said, ‘Okay, cool, we are going to set you on the right track,’” Burt remembers. “He wasn’t my adviser — I didn’t even have an adviser then, but he talked me through which psychology classes to take next.” 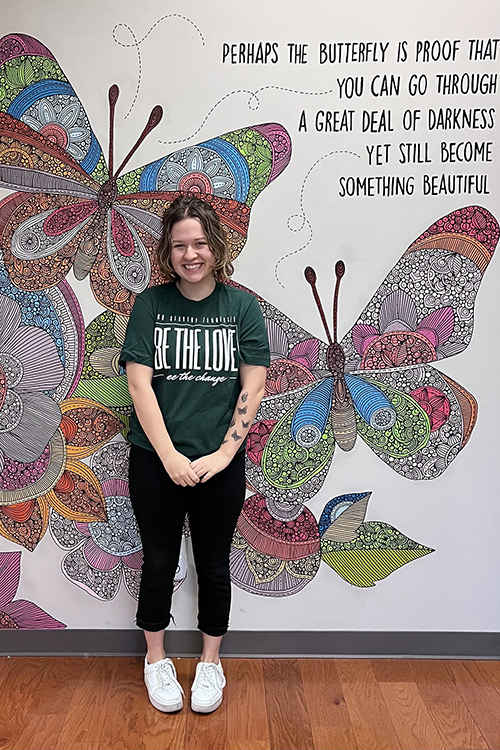 In this 2021 photo, MTSU senior psychology major Haley Burt, a Murfreesboro, Tennessee, native, is all smiles at her job at End Slavery Tennessee, a Nashville-based nonprofit that works with sex trafficking victims. Burt, who’s minoring in criminal justice administration, is one semester away from graduating and already working her dream job at just 20 years old. She credits the university’s Dual Enrollment program with jump-starting her academic career. (Submitted photo)

As for Marshall, he remembers Burt as a student who appreciated the non-academic side of the college experience. “She had the understanding of how important it is for students to talk to faculty about their goals,” he said. “The ability to be mentored is so important.”

Marshall called Burt an impressive and driven student and is looking forward to seeing what she does with her career.

“The biggest thing I’ve learned in college is to make those important connections,” she said. “Even going up at the end of a class and introducing yourself can take you so far. My mom gave me that advice and it’s been so helpful.”

Now, Burt is working on a thesis and has written a research paper with one of those professors she made a connection with.

“I took Mitzie Forrest’s Women, Crime, and Justice Administration class in the winter of 2020 and I loved it,” Burt said. “I liked her so much that I found out what other classes she was teaching and enrolled in those when I could.”

Burt ended up writing a research paper on sex trafficking with Forrest’s guidance. Forrest, a lecturer in criminal justice administration, provided a network of professionals for Burt to interview and through that research Burt discovered End Slavery Tennessee, a Nashville-based nonprofit that works with sex trafficking victims.

She applied and interviewed but did not ultimately get the job because she was too young. She had been working at TrustPoint Psychiatric Hospital and interning at Doors of Hope, but really wanted that job at End Slavery Tennessee. Then, months later, that same position at End Slavery opened up again.

“They remembered me,” Burt said. “They took a chance on me and offered me the job and I love it.”

Burt works in resident support on weekends at the organization’s safe house. She said she provides emotional support and safety protocol for those living in the house.

“I get to make a difference and help people,” she said. “There’s so much need for people to work in victimology and just being to be a part of that in any small way has been crazy and I have loved every second of it.”

Burt’s honors thesis for graduation is on the topic of trafficking. With Forrest’s help, she knows she will be successful.

“I don’t even have just one mentor now,” Burt said. “Because of dual enrollment and cultivating these relationships, I have an entire network of people who have helped me over the years.”

Forrest said Burt is one of the most driven and highly focused students she’s met.

“She may be a young student, due to the dual enrollment credits she came to MTSU with, but she’s so focused that age does not seem to be an indicator of commitment or desire to learn more,” Forrest said. “At her young age, she is already working in a professional capacity with an organization to help those who have been sex trafficked recover and have meaningful futures. I think we will see some outstanding research come from her.”

Burt says she knows she is in the right place despite the uncommon path she took to get here.

“I asked myself so many times in the last five years if I actually belong here,” she said. “I’ve loved my time at MTSU, both as a dual enrollment student and a full-time college student, but I am ready to graduate this December.”