Half a Century in the ‘Glass House’: Reflecting on magical moments at Murphy Center

Stately and iconic Kirksey Old Main, one of the first buildings constructed on the MTSU campus 111 years ago, may be the most recognizable facility on campus. But, for many, 50-year-old Murphy Center is MTSU’s most sentimental spot.

From first kisses and first concerts to first days of college, Murphy Center may hold more memories than any other building at MTSU. 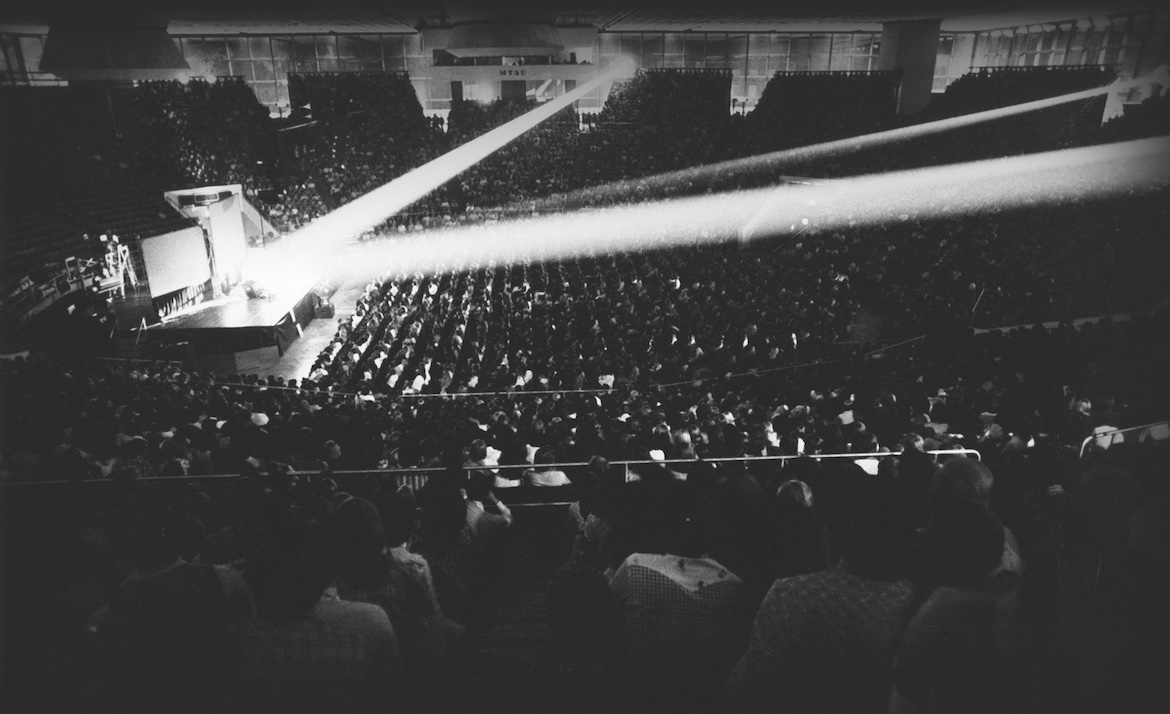 As “The Glass House” approaches its 50th birthday in December, efforts are under way to renovate it and ensure that it remains a vibrant part of campus life.After all, where else on campus—or anywhere else in middle Tennessee—did Elvis Presley make a live recording of back-to-back concerts in May 1975.

For three decades after it opened in 1972, Murphy Center was—in the words of former Student  Programming director Harold Smith—“the venue, not only in Nashville but in the mid-South.”

Elvis, who performed there five times, was one of dozens of top acts that drew fans by the thousands to Murphy Center in the years before Nashville’s Bridgestone Arena was built.

With its free-floating cantilevered roof, 520 glass panels that form its walls, and 11,500 seats for concerts and sporting events, there was, and is, no place like Murphy Center in middle Tennessee.

A who’s who of entertainers—Elton John, The Who, the Beach Boys, Johnny Cash, the Eagles, the Judds, and many more—played there.

The arena also played a part in the enormous growth of MTSU and Murfreesboro. Just as all those entertainers found their way to the ’Boro, so did their fans, and many became students or the parents of students. They also found out that Murfreesboro was a desirable place to live.

“It gave the city a sense of being cosmopolitan,” said broadcaster and recent alumni honoree Chip Walters. “What other building has contributed so much to the growth of the city and the school?”

The arena is a “cultural icon and should be treated as such,” added Athletics Director Chris Massaro. “More people went on first dates there. They graduated there. Now their kids or grandchildren have graduated. You mention Murphy, and everybody has a memory.”

As part of the University’s new Build Blue project, a $100 million-plus plan to upgrade athletics facilities led by GMC+HOK, Murphy Center is receiving a makeover for its 50th birthday.

The antiquated glass surrounding the historic structure was recently replaced with an updated system that offers a better appearance and automatic dimming for glare control. Future improvements include (at long last!) a dedicated, primary entrance to the arena, a main lobby, and a newly designed basketball floor.

Of course, the question on everyone’s mind is whether the oddly spaced steps leading up to the veranda will be altered. Word is it’s too early in the design stage to know—but stay tuned!

Dotting the pages of the Summer 2022 edition of MTSU magazine are glimpses of Murphy’s magical past. We hope you enjoy the trip down memory lane.