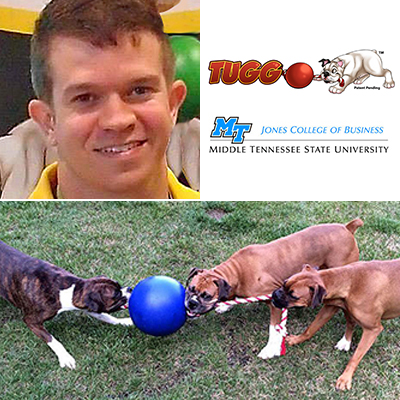 A former MTSU student who used his education to turn a dog’s playtime into a lucrative career was the guest on a recent “MTSU On the Record” radio program.

Host Gina Logue’s interview with Adam Harrington first aired Aug. 29 on WMOT-FM (89.5 and www.wmot.org ). You can listen to their conversation below.

Harrington, who majored in entrepreneurship, is the inventor of the Tuggo Water-Weighted Dog Toy.

The hard plastic ball, which has a sturdy rope running through it, comes in two sizes: 7 inches around for small dogs and 10 inches for larger dogs.

After a human fills the ball with water or sand, the dog can grasp the rope in its teeth and drag the toy around the yard for play. If other dogs — or playful humans — get involved, a lively game of tug-of-war ensues and everybody gets some fun-filled exercise.

Harrington acquired venture capital for his invention via a recent Kickstarter campaign, exceeding his goal of $163,212.

The durable Tuggo toy is available at pet stores and online at www.tuggodogtoy.com. Harrington continues to promote his product at trade shows, and it’s also been displayed on NBC’s “Today” and reviewed in The New York Times.

“A lot of my background is marketing,” said Harrington. “I think that’s where MTSU really helped a lot. It showed the importance of graphics design, fliers … brand colors, etc.”

Doggy pals Ginger, Maximus and Willow play with their Tuggo dog toy, invented by former MTSU entrepreneurship major Adam Harrington. The toy’s been featured on NBC’s “Today Show’ and in The New York Times, and its website includes more photos and videos of the toy in use, including some unexpected users. (photo submitted)