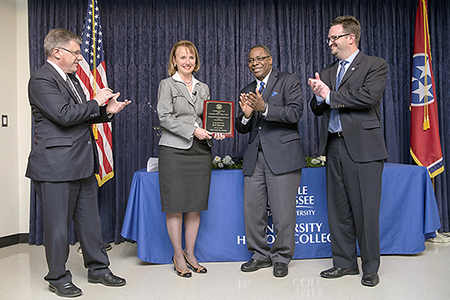 Trailblazing state House Speaker Beth Harwell took a few moments before receiving a special award from MTSU on March 21 to share stories of other women who blazed a trail across Tennessee in the past three-plus centuries.

Pennsylvania native Harwell, who is in her 12th year of representing the 56th District that includes part of Davidson County and Nashville, discussed the historical roles played by Charlotte Robertson and Sarah Polk, the influence of former Rep. Harry Burns’ mother in the 19th amendment giving women the right to vote, three-time Olympic gold medalist Wilma Rudolph overcoming polio as a child and University of Tennessee-Knoxville Hall of Fame coach Pat Summitt’s rise to success.

MTSU President Sidney A. McPhee then presented Harwell with the second Distinguished Friend of the University Honors College Award for Distinguished Service to the State of Tennessee. The event was held in the Paul W. Martin Sr. Honors Building.

“We could not have a far better candidate for this award,” McPhee said in introducing Harwell.

He added that he worked with her and other legislators in the last couple of years, particularly regarding the $147 million science building currently under construction on the south side of campus.

Harwell, the first female speaker of the House of Representatives in Tennessee and in the Southeast, invited the audience to her legislative office, where she said the award “will be permanently on display.”

After signing the Honors College’s Book of Town and Gown at the request of her friend Dr. Philip Phillips, interim associate honors dean, Harwell said during a reception that the recognition “came at a very nice time. It’s an honor to be here during (National) Women’s History Month.

“This university has done so much to promote women, to make sure young women are educated and in the workforce, to employ a lot of women faculty members and administrators,” she continued, “so it’s an honor to be recognized by a university I hold in such high esteem. You’re not only growing in quantity, you’re also growing in quality. I’m just so impressed (with MTSU).”

The first recipient of the college’s “Distinguished Friend Award” was Turkish entrepreneur and humanitarian Celal “Uncle Celal” Afsar in 2011.

The University Honors College was formally established in 1998 after 25 years of success as an honors program. Its purpose it to provide an exceptional undergraduate education to a small but diverse MTSU student population.

Harwell served as a commencement speaker during MTSU’s fall 2012 morning ceremony. Holding degrees from Lipscomb and Vanderbilt universities and George Peabody College, she is a proponent for K-12 and higher education.