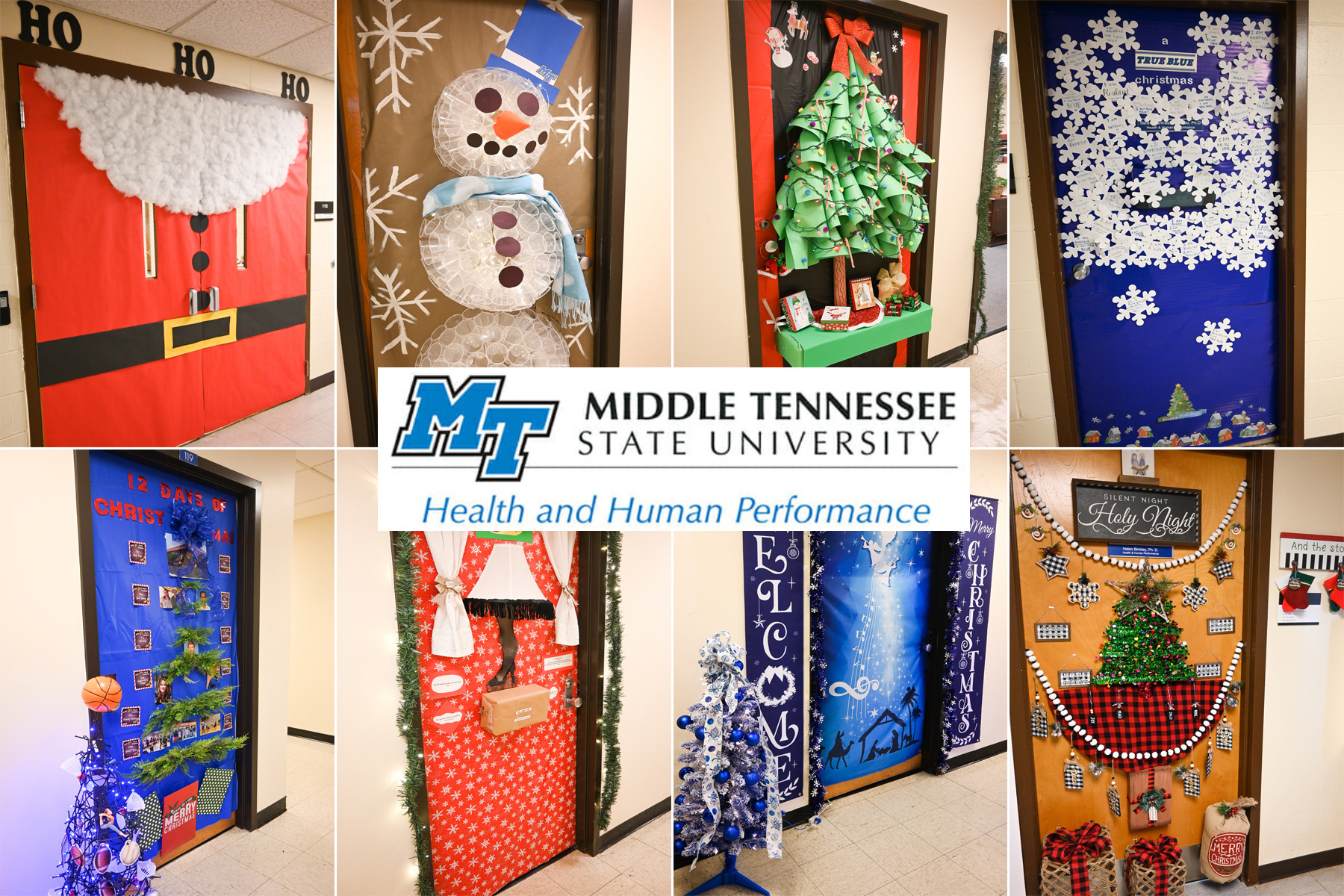 Sonya Sanderson, chair of MTSU’s Department of Health and Human Performance, has always loved to decorate her office door for the holidays.

“This year, my Halloween decorations must have really impressed because several people asked, ‘What are you going to do for Christmas?’”

Sanderson said she thought it would be fun for others to join in, and her coworker Paco Ramos, a lecturer in the department, said they should bring back a practice they had both participated in as graduate teaching assistants back in 2000 — a Christmas door decorating contest.

Sanderson loved the idea and put it into action.

“Missy Mullins, our office coordinator, sent out a friendly competition email to all faculty, graduate teaching assistants and staff on Oct. 25, and invited them to decorate their doors and that I would give prizes to the top three doors,” Sanderson said.

Department members had just over a month to put their creations together, and five judges, staff from other departments, picked winning doors on Dec. 1.

“We awarded gift cards to popular restaurants and coffee shops for $15, $10 and $5 for the top three doorsand also awarded prizes to the most creative, best craftsmanship and best area participation; the Speech-Language Pathology Audiology Program staff all decorated their doors in a Santa’s reindeer theme. We also did honorable mentions for visual impact, most fun, thinking outside the box and graduate teaching assistant participation,” Sanderson said.

Sanderson chose a Christmas tree theme for her door.

“It took me coming in over the weekend, but I had a blast creating my door,” she said. “Just to share a little Christmas cheer made coming in on a Sunday for four hours well worth it.”

Mullins modeled her door after the entrance to Santa’s North Pole workshop, complete with an elf-sized, True Blue door.

“Having True Blue included in the doors is not part of the contest, but it seems as if everyone did include it,” Mullins said.

In almost all the 26 participants’ entries, there is a lively combination of holiday and Blue Raider spirit: blue Christmas trees, ornaments, lights, sweaters, scarves and more. The top-place trophy also sports MTSU blue.

“We have had such a good time with it that I expect this tradition to be revived for many years to come,” Mullins said.

Ramos and his wife, Angela Ramos, an instructor at the department, went to three Goodwill stores to deck out the door of their shared office in Christmas sweaters.

“Fun, pure entertainment and good camaraderie!” he said about the whole experience.

“It’s impressive,” Angela Ramos said about particpants’ efforts. She sewed six sweaters together for their door.

“I hope that the tradition continues and that for sure it will become more creative, competitive and fun for everybody!” Paco Ramos said.

Sanderson said the department plans to do the competition again next holiday season after this year’s positive experience.

“The ‘oohs and ahhs’ that I hear as people walk past our doors have been the best part,” she said. “In turn, I know that we have ‘made someone’s day.’ We are just having so much fun!”