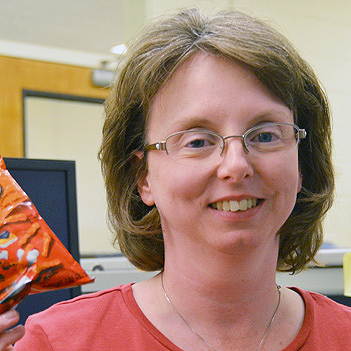 MTSU’s Ben Jones never expected his CPR training years ago would ever have to be put to use. He probably never thought he’d have to try to save a life during his lunch hour, either.

Christi Farris and a registrar’s office co-worker were eating lunch June 5 in the Cope Administration Building break room when a bit of a Cheetos cheese puff became lodged in her windpipe.

Ben Jones, left, and Christi Farris reminisce about her June 5 choking incident that he helped avert with the Heimlich maneuver. (MTSU photo by News and Media Relations)

“I was eating, laughing and talking, something my mother, Mildred Farris, tells me not to do,” Farris said.

She and her colleague stood up simultaneously. So did Jones, an assistant director in Accounting Services who was mentoring former MTSU student Tyree Rumph in the break room, and Rumph.

“I said, ‘Do you need me to help you?’” Jones, who had CPR training as part of a first-aid class, recalled. “She motioned that she needed help.”

In the right place at the right time, Jones began implementing the Heimlich maneuver.

“I thought she was going to be OK,” Jones said, “but she said she wasn’t getting any air.”

“This was my first time to be choked like that, so I was kind of panicky,” Farris recalled the day after the incident.

After four tries, “I coughed up the Cheetos (bit) into my hand,” she said. “He was good. … Ben knew exactly what to do. I appreciate him being there.”

“I’ve seen Christi for years, walking in the hallways and in the break room,” Jones said. “This campus is a family. When it gets down to it, you need to prepare. It wasn’t me, anyway. I give the credit to the Lord.”

Jones explained that something as simple as his lunch hour being shifted in recent weeks led to the opportunity to help.

“The fact that I was over there was kind of set up a few weeks back,” he said. “I’m just humbled to be a part of a good thing.”

If anyone offers to share a bag of Cheetos with Farris, she said she’ll be saying thanks but no thanks.

“I am not eating any more of them for a while.”