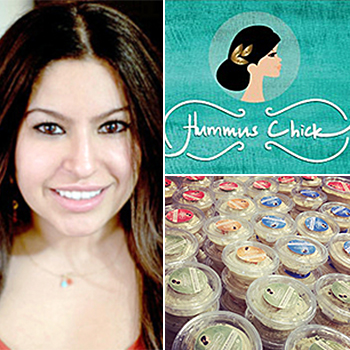 An MTSU alumna who found her career in cultural cuisine was the guest on a recent “MTSU On the Record” radio program.

Host Gina Logue’s interview with Java Hemmat, founder and owner of Hummus Chick, first aired July 13 on WMOT-FM (89.5 and www.wmot.org ). You can listen to their conversation below.

Hemmat, a native of the United Arab Emirates, founded Hummus Chick in May 2012. She created several different flavors of hummus, a Middle Eastern dip made from chickpeas, olive oil and other ingredients, which now are in 15 stores around the region.

A recently naturalized American citizen, Hemmat moved to the United States in 1998 and relocated to Nashville in July 2003 after she graduated from MTSU with a bachelor’s degree in business administration.

“I value that experience,” Hemmat said of her college education, “because I meet entrepreneurs all the time [who] don’t have a business education, and what I learned about 15 years ago, they’re just now learning today.”

For more information about Hummus Chick, go to www.ilovehummuschick.com or visit the Facebook page at www.facebook.com/Hummuschick.