‘MTSU On the Record’ revisits Vietnam with expert ...

‘MTSU On the Record’ revisits Vietnam with expert historian 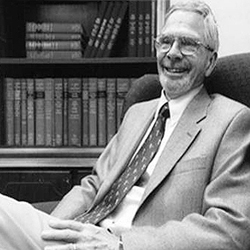 One of the nation’s foremost experts on the Vietnam War was a guest on a recent edition of “MTSU On the Record” with host Gina Logue.

You can listen to the conversation with Dr. George Herring, who lectured Oct. 25 at MTSU on “Vietnam: The War That Won’t Go Away,” here.

A professor emeritus and former alumni professor of history at the University of Kentucky, Herring served as chair of the Department of History from 1973 to 1976 and 1988-1996. In 2002, he was awarded the Society for Historians of American Foreign Relations’ Norman A. Graebner Prize for distinguished contributions to the field.

Herring’s published works on the Vietnam War include America’s Longest War: The United States and Vietnam, 1950-1975; The Secret Diplomacy of the Vietnam War: The ‘Negotiating Volumes’ of the Pentagon Papers; and LBJ and Vietnam: A Different Kind of War.