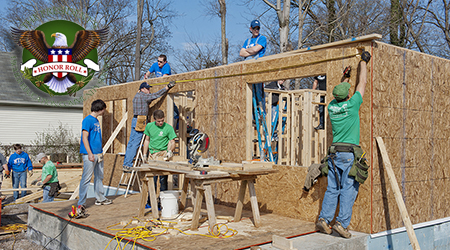 The Higher Education Community Service Honor Roll, launched in 2006, annually highlights the role colleges and universities throughout the nation play in solving community problems and placing more students on a lifelong path of civic engagement by recognizing institutions that achieve meaningful, measureable outcomes in the communities they serve.

This is the third time MTSU has made the national list.

“This is an additional representation of the kinds of things we do out in the community with our students, faculty and staff,” Owens said. “Every division participates in this.”

The 2013 recipients were announced earlier this spring at the American Council on Education’s 95th annual meeting,”Leading Change,” in Washington, D.C.

Owens said MTSU’s designation reflects the university’s work via partnerships within the local community and throughout the region as well as internationally.

Among the initiatives highlighted is MTSU’s Experiential Learning Scholars Program, which encourages students to participate in service-learning activities such as Habitat for Humanity Blitz Builds and after-school tutoring at area schools. During the 2011-12 academic year, students performed almost 198,000 hours of community service work.

MTSU faculty, staff and student volunteers broke ground on a Habitat for Humanity home, their third home for a Rutherford County resident, in January 2012. The project was unique in that the only onsite volunteers were members of the MTSU community.

The home, which marked Rutherford County Habitat’s 109th, and was built in the neighborhood surrounding MTSU. Organizers said it honored MTSU’s commitment “to being a good neighbor and its recognition that it takes good neighbors to build a house.”

MTSU students, faculty and staff pitched in with labor and collecting donations. The house was completed and was dedicated to its new owner, Yvonne Summers, on April 26, 2012.

“The MTSU volunteers were ecstatic to be able to participate in an event so life-altering for Ms. Summers and her family,”  Dr. Danny Kelley, assistant vice president for student affairs at MTSU, said in the honor roll application.

“The partnership that MTSU has with Rutherford County Habitat for Humanity is recognized as one of the best the university has with any entity or organization.”

Established in 1993, the Corporation for National and Community Service is a federal agency that engages more than 5 million Americans in service through its core programs — Senior Corps, AmeriCorps and the Social Innovation Fund — and leads President Barack Obama’s national call to service initiative, United We Serve.

New homeowner Yvonne Summers, center, is joined by MTSU volunteers at the April 26, 2012, dedication ceremony for her new home, which boasts a Raider blue mailbox. Leadership and Service Director Jackie Victory, standing next to Ms. Summers, and MTSU then-sophomore Randall Thomas, far right, spoke at the event. (FIle photo by MTSU Office of Leadership and Service)